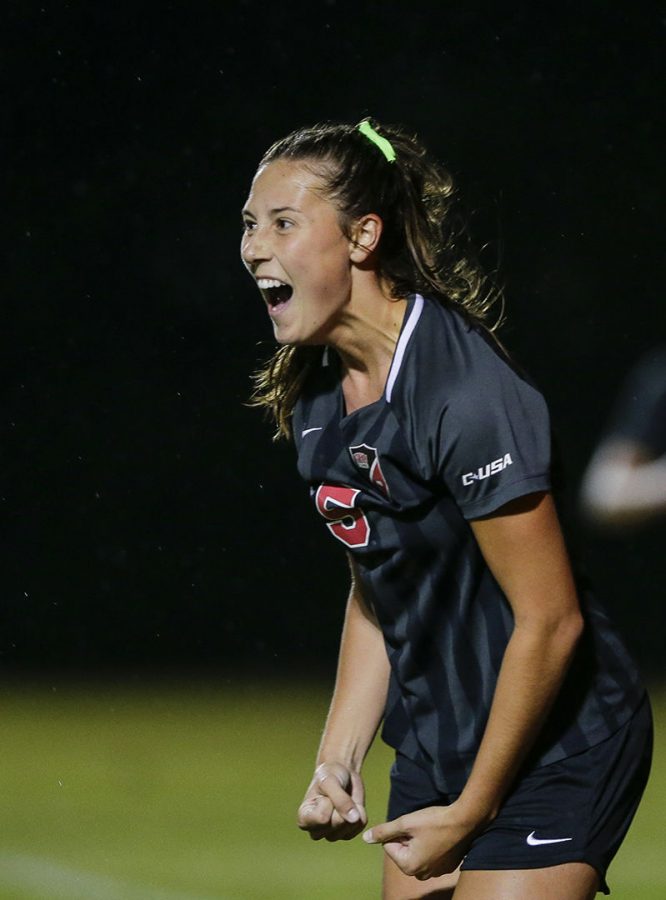 The WKU soccer team (9-6-1, 5-4 C-USA) defeated the visiting Alabama-Birmingham Blazers (4-6-5, 2-4-2 C-USA) on Friday night, as senior forward Chandler Backes added another tally to her long list of career goals and lifted the Lady Toppers to a 1-0 win on the program’s Senior Night.

“It was amazing, and it was just one of those indescribable moments,” Backes said about her game-winning goal, the 20th of her career. “It could not have come at a better time, and the support from my teammates is just amazing. I am really excited for this team moving forward.”

Head coach Jason Neidell said he told his seniors this game wouldn’t define their careers on the Hill — it was just a footnote.

But a game-winning goal from Backes and a late save from redshirt senior goalkeeper Anne-Marie Ulliac translated to a storybook ending for their final home game.

After failing to score a goal during their previous two games, the Lady Toppers were able to get back on track after a pair of slip-ups in the Lone Star State against North Texas and Rice.

“We knew that we needed three points,” Neidell said. “We wanted to continue our season and UAB stood in the way of that. I thought we came out with a lot of spirit and fight and thought we played a really good first 80 minutes. I’m happy with our kids tonight, and I thought they played fantastic.”

Ulliac recorded two saves on the night, notching her sixth shutout of the season in goal. Sophomore midfielder Ambere Barnett led the team in shots with six.

“I feel like we had a lot of possessions tonight, and so only having to make two saves was nice,” Ulliac said after her tenth win as a Lady Topper. “Those were the kinds of saves we train for all season and my goalkeeper coach Katie Nimitz had us work on the kinds of saves I needed to make tonight.

“This game was a huge motivator for us and to have Chandler score and everyone work together for the shutout was just amazing.”

Friday night’s matchup between the two Conference USA teams saw the Lady Toppers force the ball down the field in the first few minutes.

The Blazers countered moments later with a solid strike that was controlled by Ulliac.

Redshirt junior midfielder Aleksandra Kožović left the game about 10 minutes into the action and did not return. Junior forward Ashley Leonard replaced her injured teammate.

Backes had an open opportunity to score early, but she popped the ball up over Blazer freshman goalkeeper Eve Beyer at the 15:12 mark.

Leonard threatened the Blazers again, but Beyer bought some luck with the crossbar after the forward put her shot off the top left woodwork at the 31:58 mark.

At the halftime break, neither program was able to pull ahead on the scoreboard. The Lady Toppers lead in shots on net, totaling two while holding the Blazers to no shots on Ulliac.

The Lady Toppers had four corner kicks in the first half to the Blazers’ two.

The action for either side on offense was minimal, but time in the offensive zone for each team saw a few opportunities that could have led to goals. The IQ of the Lady Topper defenders showed in the first half, as the Blazers spent just 7% of the action in the high-danger zone.

As the game developed, things got a little bit chippy. Players from both programs endured a few shoulder-to-shoulder plays and a few missed calls by the officials, which ignited both coaching staffs into more than a few shouting matches.

Barnett opened up the second half with a shot on net at the 50:44 mark, but Beyer saved the shot aimed at bottom center. Just over three minutes later, sophomore forward Olivia Stanley shot and missed the top right corner of the upper 90.

Junior defender Avery Jacobsen then found Backes, who had positioned herself in the right side of the box. Backes then proceeded to beat Beyer clean over her head from 12 yards out, putting the Lady Toppers on the board first at the 65:31 mark with her second goal of the season.

The Lady Toppers held the Blazers without a shot on net until deep into the second half.

UAB freshman defender Lizzie Hill shot it from outside the box at the 75:38 mark, but Ulliac made a routine flat-shot save off the scoring attempt.

The second shot on net from the Blazers came from junior midfielder Regan Kommor at the 81:47 mark. Ulliac stretched herself out to the left side of the goal, preventing a potential game-tying goal.

Ultimately, the Lady Toppers were able to pull out the one-goal win despite being pressured heavily by the Blazers at times in the final minutes.

Following the win, the Lady Toppers will head off to Huntington, West Virginia, to face Marshall (4-12, 2-6 C-USA) in their final game of the regular season next weekend. Marshall will be coming off a road game against Louisiana Tech, which will be played on Sunday at noon.

WKU and the Thundering Herd will square off on Nov. 1 at 6 p.m.