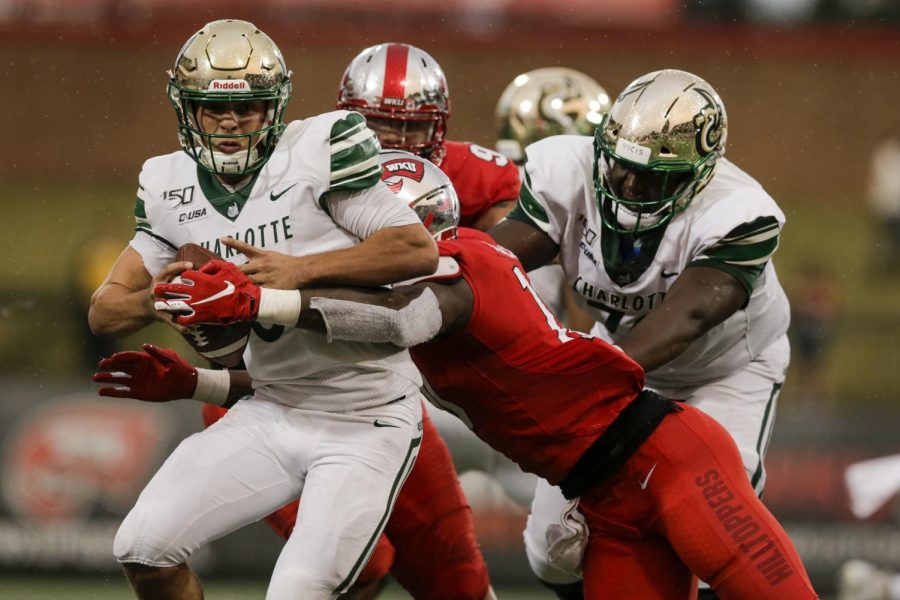 Chris Reynolds (3) of the Charlotte 49ers guarded the ball from DeAngelo Malone (10) of Western Kentucky University’s Hilltoppers during their on Saturday, Oct. 19, 2019, in Houchens-Smith Stadium, Bowling Green, Ky.

The WKU football team (5-2, 4-0 C-USA) was locked in a tight battle with the upset-hopeful Charlotte 49ers (2-5, 0-3 C-USA) early in the game on Saturday, and it looked like the Hilltoppers might fall victim to a trap game after their big win over Army.

Early in the third quarter, the 49er offense had the ball and was driving, down only 20-14.

Junior cornerback Roger Cray made a seemingly good play to break up a pass and force an incompletion. Instead, the officials threw a late flag for defensive pass interference.

The 15-yard penalty moved the ball from the Charlotte 37-yard line into WKU territory, and the dominant WKU defense was suddenly on its heels after a questionable call.

What happened on the very next play sums up the toughness that has been on display from the WKU defense throughout the 2019 season.

Cray didn’t let the penalty impact him, picking off Charlotte quarterback Chris Reynolds to give possession back to WKU. The Hilltopper defense pitched a shutout against the high-flying Charlotte offense from that point on, eventually skating to a 30-14 win.

Redshirt senior defensive back Ta’Corian Darden said he was ecstatic for Cray and noted the defense wouldn’t let negatives in the past impact what’s to come.

“We like to have a next play mentality,” Darden said. “I personally don’t think if was a pass interference, but Roger Cray came back with the next play. He didn’t worry about it or argue with the ref or nothing. He just came back and got blessed with a pick. It was so exciting. His first game back, it was exciting. That was an exciting feeling right there.”

Junior linebacker Kyle Bailey said it speaks volumes about the defense that it can respond to challenges on the field in a positive manner.

“It says a lot,” Bailey said. “Everyone knows you’re going to face some adversity when you step on that football field. It’s all about how you respond. You come back with a good attitude, good things can happen. You back with a bad one, you can give up a game easily.”

The defense has garnered a lot of attention this season, and deservedly so. Plays like Cray’s have helped the defense turn the tide of a game in its favor. Head coach Tyson Helton said he couldn’t be happier with the defense he gets to coach day in, day out.

“It’s been a blast,” Helton said. “I’m the happiest head coach in America. To sit there on the sidelines and watch those guys play the way they play, it allows me to change my mindset offensively. By the time we hit the second half, I’ve got a good feel for what they’re capable of doing or if we’re holding them pretty good. It helps me offensively, not to have to put the pedal to the metal all the time. It’s fun to watch.”

The WKU offense also showed signs of life against Charlotte, as the Hilltoppers finally hit some of the trick plays they hadn’t been able to execute all year.

Graduate transfer quarterback Ty Storey connected with senior receiver Lucky Jackson for a nice 69-yard touchdown off a flea-flicker. In the fourth quarter, Jackson was the passer and threw an 8-yard touchdown pass to Storey.

Storey said that although the big plays hadn’t happened to this point, the offense was still playing well regardless.

“We’ve been feeling good all year,” Storey said. “We obviously haven’t been putting up the points that we want to, but we’ve been driving the ball, and we internally know we’re a good offense. It was nice tonight to put up a couple more touchdowns, but the crazy thing is we left a lot out there. The next step we have to take is not leave so many points out there and keep striving to get better.”

The next step is to make these big plays a constant rather than an anomaly. The offense still left quite a bit of plays on the field, including a massive drop from junior receiver Jacquez Sloan that could’ve gone for a 65-yard touchdown.

Jackson agreed that the offense still has a lot of untapped potential.

“I still feel like there’s so much more out there for our offense,” Jackson said. “We’re just now touching the surface. We’ve got big things in store. We’ll see the film tomorrow, make the corrections and learn from them.”

Helton said a big part of connecting on big plays is being in a prime position at the perfect time. Helton believed if the Hilltoppers stay the course, the explosive plays will follow.

“For us, I don’t think you change anything we do,” Helton said. “I think it was the right place at the right time, the right opportunity. We’ve taken some of those shots before and they haven’t worked out for us. They worked out this time.”

Storey said that WKU must hit on the big plays when possible, but emphasized the need to simply win the game is of the utmost priority to this team.

“When it’s there, we have to make it,” Storey said. “Tonight we did. It’s been there. Obviously, as good as our defense is too, there’s a fine line you walk. You want to win the game.  We want to be an explosive offense. We want to put up points. But, at the end of the day, as long as we’re winning football games, it doesn’t matter. We’re going to continue to work and keep getting better to improve this offense. We just got to keep racking up these wins.”

WKU will look to connect on more big plays on the road against Marshall (4-3, 2-1 C-USA) this weekend.

The Hilltoppers will travel to face the Thundering Herd in Joan C. Edwards Stadium in Huntington, West Virginia, next Saturday.

Kickoff is set for 1:30 p.m. The game will be streamed on Facebook Live.