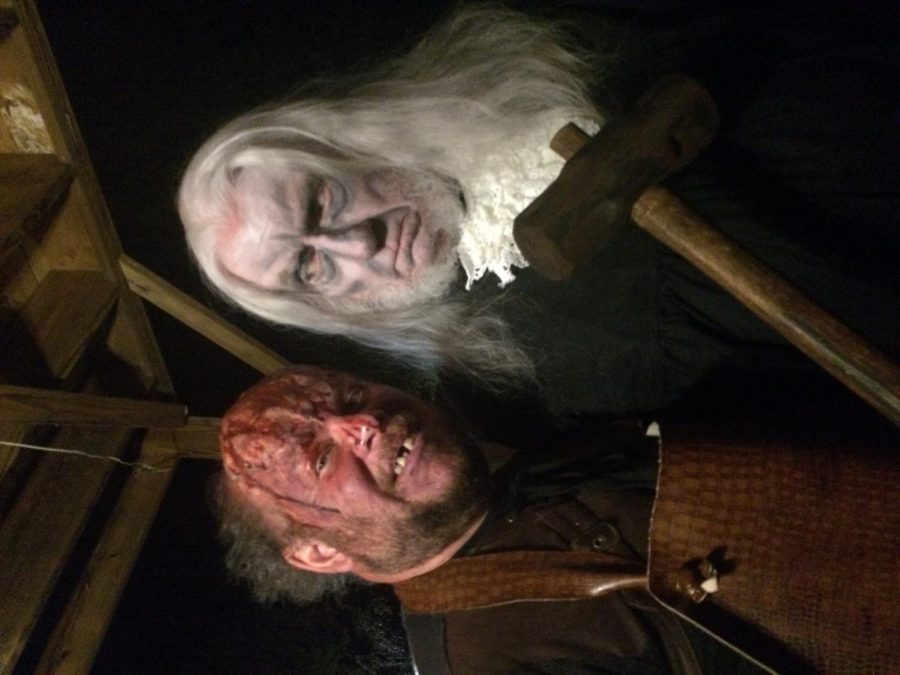 Imagine stepping into a small chapel lined with pews occupied by dead bodies, looking up and seeing a tall man with long white hair cloaked in black with a pale, gaunt face.

By night, he is a puritan minister in the town of Sleepy Hollow. By day, he is a professor of sociology at WKU.

Craig Taylor has taught at WKU for over 50 years, but students aren’t his only audience. He is also an actor currently working at the Raven’s Cross Haunted Village in Cave City. The haunted house has been around for four years, and he has been with it every step of the way.

This house is not like others, as customers are inserted into the plot as if they were characters in the story. Taylor is the first thing people see when they enter, and his job is to tell them the backstory of the town and what to expect as they continue on.

“I explain to people that we are the descendants of the survivors of the haunted village,” Taylor said. “We fled there to get away from the demons, but they have followed us.”

The attraction is open every Friday and Saturday in October, and he is usually there both nights. In four years, he has only missed three days.

The cast is made up of actors of all ages. Taylor is the oldest at 79, and he said the youngest is only 7. He feels a strong attachment to everyone he works with.

“I’ve watched them grow up,” Taylor said. “And they are always so glad to see me, so that feels good.”

Taylor helps out backstage as well by building sets and doing his own makeup. Debbie Thorp is the co-owner of Raven’s Cross with her husband, Bryan. She said Taylor is an asset to the business, helping out with anything and everything.

“He has come help build and goes to haunt conventions with us,” Thorp said. “He really loves to be a part of it.”

Thorp said his role as a professor helps him as an actor by being able to speak well in front of audiences. She doesn’t give any of the actors’ scripts and instead lets them improvise, because she feels that is the best way to let them do their job.

“Taylor is a born storyteller,” Thorp said. “He gets very into character and puts the customers on edge.”

Malia Curtsinger, a sophomore sociology and criminology double major from Goodlettsville, Tennessee, is in one of Taylor’s sociology classes. When she first learned about his side job, she wasn’t expecting it, but she can picture it.

“At first glance, he seems just like a cool old guy with long hair,” Curtsinger said. “If anyone were to have a side gig at a haunted house, it would be him.”

She described a class with him as one filled with personal stories relating to the subject the class is talking about. He has a lot of passion for what he does and sharing his life experience, she said.

Halloween is Taylor’s favorite holiday. He loves the costumes, atmosphere and theatricality of everything.

He brings candy in a jack-o-lantern to the sociology department every day and even carries around a “Nightmare Before Christmas” wallet. With the haunted house, Taylor has been able to combine his passion for performing with his love for Halloween.

Taylor talks about Raven’s Cross some in class and hands out fliers now and again. Curtsinger said at the beginning of October, he even walked into class with part of his beard shaved for the role.

He said there is a lot he loves about working at the haunted house. For one, he and his castmates share a close bond, and he enjoys the excitement they all have at the beginning of each show.

When he is actually working, however, he is in the room alone until the customers come in. On the job, he looks forward to adjusting his performance to each group of people that walk through the doors.

“No two groups coming into that room are the same,” Taylor said. “Some of them are silly and giggly, some of them have been drinking, some of them are families, but the dynamics of each are different, and I have to approach them differently. It’s a challenge, but each time is a performance.”