How to keep your coffee habits healthy 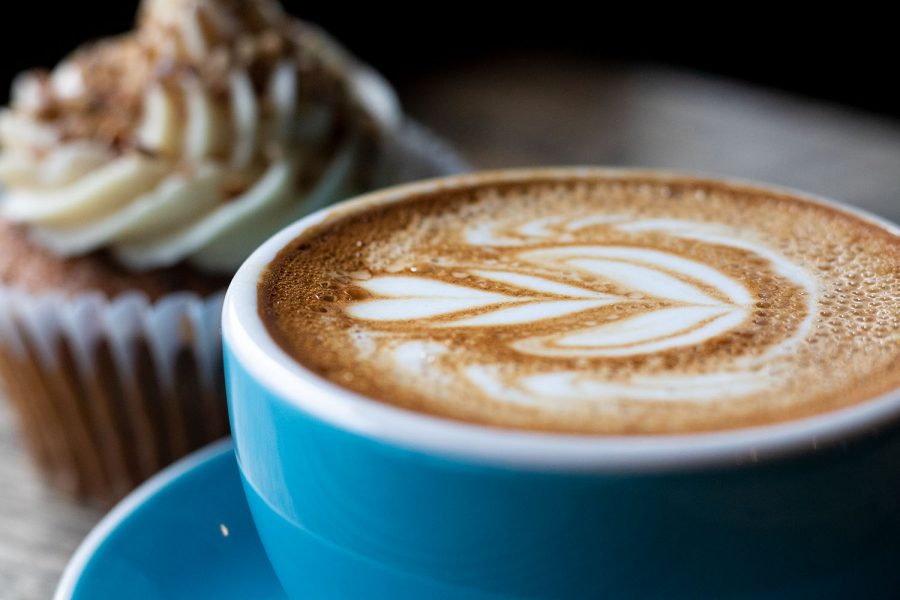 Spencer's Coffee Shop is the only place in bowling Green where patrons can come to get latte art. Cody Crume, 23, is one of the latte artists. "I love it. It takes a lot of practice because there are a lot of steps. It's more than just pouring foam. You have to get everything right and pay attention," said Crume.

It seems as though all college students have one thing in common: an obsession with coffee. What many probably don’t know is the effect it can have on the body.

Cory Eakins, WKU nutrition coordinator, said overall, coffee is a good thing. Too much of a good thing, however, can be bad.

Coffee has a lot of benefits, Eakins said. Black coffee is filled with antioxidants, trace minerals, magnesium, potassium, among other things. It can lower your risk of certain diseases like diabetes, Alzheimer’s, Parkinson’s and some cancers. People don’t necessarily drink coffee for these benefits, however — they drink it for the caffeine.

“When you drink too much coffee, you increase the risk of the harmful effects of caffeine,” Eakins said.

The benefits of coffee are usually seen when people only drink two to three cups a day. Eakins said when one starts drinking more than that daily, the caffeine can create serious problems. Some of these include an increase in your blood pressure and heart rate, which can be damaging to the cardiovascular system. This can cause long-term effects like heart problems and hypertension. Some immediate effects can be heart palpitations and shortness of breath.

“When you work out and your heart rate goes up, you can just stop and take a breather,” Eakins said. “When you drink too much caffeine, you can’t do that. It just keeps happening.”

If someone feels the negative effects of caffeine, they need to drink a lot of water and refrain from drinking more for the next day or two, Eakins said.

“I like for people to know that there are four grams of sugar in one teaspoon,” Eakins said. “When drinking something with 32 grams of sugar, that’s eight teaspoons, which is a lot.”

Eakins said grande drinks like macchiatos, frappes, mochas or lattes at Starbucks are usually in the 30-gram range when it comes to sugar. When having a few of those a day, it is easy to rack up the sugar intake.

Justin Shepherd, owner of Spencer’s Coffee, shared what some of the best and worst drinks for a person’s health are at Spencer’s.

“In theory, plain black coffee would be the best,” Shepherd said. “But most people are looking for something richer.”

Shepherd said a cappuccino or cortado would be the healthiest options. Both have a double shot of espresso with a little steamed milk. A cortado comes in five ounces, and a cappuccino comes in eight ounces. They are similar to lattes but have less milk, which means less fat and less calories.

Spencer’s crafts its drinks in a certain way so that they taste good without flavored syrups or creamers. Shepherd said baristas steam their milk properly to bring out a drink’s natural sweetness.

“People who are just getting into coffee will often ask for vanilla lattes or mochas,” Shepherd said. “The more flavoring a drink has, the more calories and sugar, and it also masks the taste of the coffee.”

Although Shepherd is happy to offer them, he wouldn’t drink them himself. He calls them dessert drinks and couldn’t drink one in the morning. He said when people seem timid to try new drinks, he and the staff try to nudge them toward drinks with less flavoring, because they believe the coffee stands well on its own.

Spencer’s also offers several alternatives which can make a drink a little healthier, Shepherd said. Some of these include sugar-free syrups like vanilla and hazelnut, which allow you to get flavor without excessive sugar content. The shop also has other milks like almond, coconut and oat milk, which can offer less fat than cow’s milk.

No matter what, at Spencer’s, no one is ever told what to do with their coffee, Shepherd said. That is a personal decision which has to be made by every drinker.