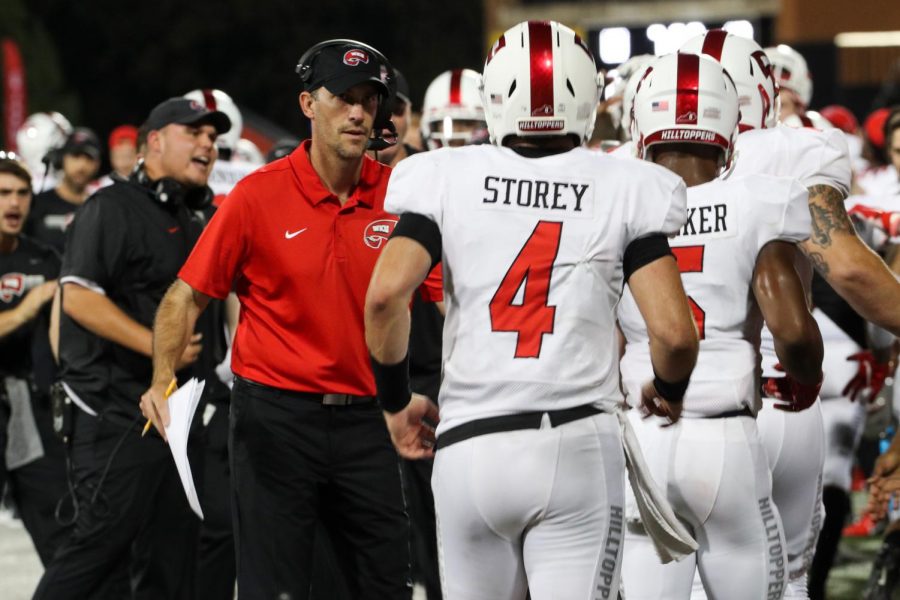 It will be a classic offense vs. defense matchup in Houchens-Smith Stadium on Saturday night, as the WKU football team (3-2, 3-0 C-USA) and its red-hot defense is set to welcome Army (3-2) and the Black Knights’ unique triple-option offensive attack to Bowling Green.

The Hilltoppers are off to an undefeated start in Conference USA play. WKU is also riding a two-game winning streak heading into its meeting with Army, but the team’s two losses have both come in non-conference action against Central Arkansas and Louisville.

The all-time series between WKU and Army features only two prior matchups. The schools played a home-and-home series several years ago, with the Hilltoppers collecting a 21-17 road win in 2013 and a 52-24 home win in 2014.

Notably, Army went on the road to “The Big House” earlier this season and nearly knocked off No. 7 Michigan, but the Black Knights ended up losing 24-21 in double-overtime on Sept. 7.

Army fell 42-33 at home against Tulane in its last outing on Oct. 5, while first-year head coach Tyson Helton has some major momentum after logging back-to-back C-USA victories over reigning league champion Alabama-Birmingham and Old Dominion.

The Hilltoppers have played stifling defense in their last two wins, allowing only 16 total points and holding each conference opponent to under 300 yards of total offense.

Despite its recent success, Helton is well aware of the unique task his defense faces in Army.

“It’s another great test for us defensively,” Helton said. “I think they’ve had different tests every week, different challenges every week, and it’s just another great challenge for them. It’s something they haven’t seen a lot of, so they’ll need to be ready. And Army is going to make their plays and they’re going to make it a good football game, but we have to be able to position ourselves defensively where we can limit their explosive plays — just can’t give them anything easy.”

The Hilltoppers have recently found stunning consistency on offense, as the WKU offense has scored exactly 20 points in all of its three victories this season.

Redshirt junior Gaej Walker is coming off his third 100-yard rushing effort of the 2019 season, and the running back seems to be in a rhythm after a stretch spent struggling to find yardage.

With offensive possessions sure to be limited due to Army’s time-consuming style of offense, offensive coordinator Bryan Ellis said it’ll be important for the Hilltoppers to make the most of their opportunities when they have them.

“We’ll for sure have limited possessions,” Ellis said. “We’ll have to have a great sense of urgency when we do get our opportunities. Each possession is going to be vital to go down and produce something. We have to go produce offensively. We’d like to score a ton of touchdowns, but there’s more to it in the game than just that.”

Junior wide receiver Jacquez Sloan said the Hilltoppers are having “a lot of fun” running the new plays Ellis adds each week, but WKU will be forced to cash in more against the Black Knights.

“We know with this game against Army they like to run the ball and run time off the clock,” Sloan said. “So, every single possession we get — if it’s like six or seven — it counts. We have to put the ball in the end zone every chance we get.”

The Hilltoppers will look to continue their torrid streak defensively against the Black Knights. WKU’s defense has shut out four straight opponents in the fourth quarter, the first time a Hilltopper defense has accomplished that feat since at least 2007.

Redshirt junior defensive lineman DeAngelo Malone has been particularly impressive for the Hilltoppers. Malone has seven sacks and 13 tackles for loss in just five games, and he’s also averaging over 9.2 tackles per game for WKU.

Even with the defensive momentum heading into this week, defensive coordinator Clayton White called this game a test to see how complete his unit is.

“It’s a test and a challenge,” White said. “I mean, we want to see what kind of complete defense we are. We’ve shown that we can run and hit, make plays. Now this is a test of our toughness and a test of our discipline.”

“It provides a unique challenge,” Jones said. “It’s a change of pace from playing usual teams that run the spread. Most teams run spread, not too many college teams run triple-option, so it’s going to test our discipline and everyone doing their job every play.”

According to ESPN’s Football Power Index, Army has a 56.3% chance to come away with a win this weekend. Helton said his team thrives in the underdog role, but the Hilltoppers have to be ready to face a Black Knight squad that’ll be ready no matter the odds.

“We do better being the underdog and those kind of things,” Helton said. “One day I think we’ll be the team that’s really talented and we’re the team to beat, but I think our guys like having a chip on their shoulder. But it doesn’t matter against a good Army team — they’re going to show up and play good against whoever they play, so we got to play our best game.”

Kickoff is set for 6 p.m. The game will be available for streaming on Stadium.