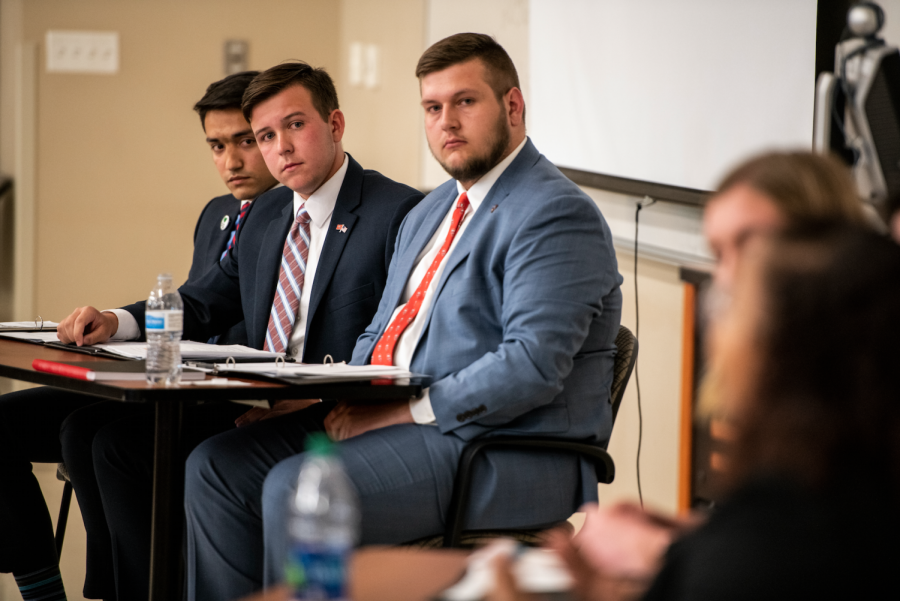 SGA executive candidates (left to right) Kenan Mujkanovic, Garrett Edmonds and Will Harris watch as their opponents speak during the Herald Town Hall on April 10, 2019 in Gary Ransdell Hall. Herald Town Hall is a forum for candidates to answer questions regarding their campaign submitted by the WKU student body, faculty and staff.

The WKU Student Government Association saw debate over a motion to cancel the student senate meeting on Tuesday, Oct. 8.

The motion, which was made by Hope Wells, senator for the College of Health and Human Services, aimed to cancel next week’s meeting due to a scheduling conflict with “Shenanigans,” a large philanthropy event hosted by the Kappa Delta sorority.

“I think that, especially given recent controversies with Greek organizations on campus and Twitter videos, we probably shouldn’t be sending the message to SGA that we endorse Greek [organizations] right now,” said senator Anthony Survance.

Arguments were made in support of canceling the meeting, since numerous members of the SGA Executive Council and the student senate are involved in various Greek organizations.

Senator Brigid Stakelum said the reason for canceling the meeting would be because a quorum would not be reached if too many members were absent.

“The purpose of canceling meetings for Shenanigans in the past has not been to endorse Greek life or to show that it’s more important than anything else,” Stakelum said, “It’s literally just a practical thing about how we may or may not meet quorum.”

A quorum is the minimum number of members present that are needed to conduct business.

After discussion had concluded, the senate passed the motion in a 17 to 15 vote.

SGA also swore in the newly elected senators. The new senators were sworn in by Isaac Keller, Chief Justice of the SGA Judicial Council.