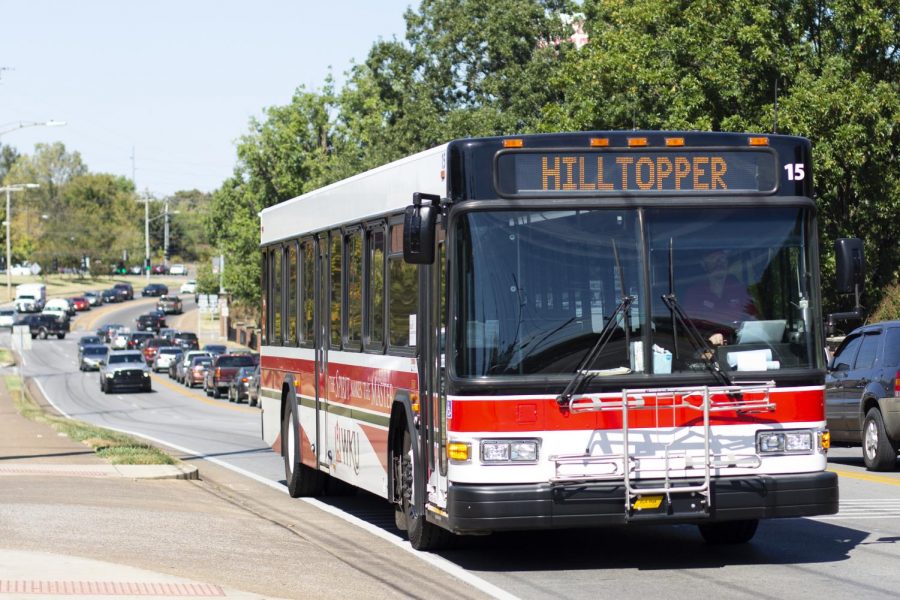 WKU students use the public transit buses to get to their destinations.

The bus was full. Completely full.

Gabriel Brannon had to walk. The freshman film major from Bowling Green often uses the Topper Transit bus to get to class, but this day, he had to walk from the Russellville Road lot to his destination, the Fine Arts Center.

The Topper Transit bus routes, which shuttle students like Brannon to class and elsewhere changed this semester. The Red Line and the White Line have become the Big Red Route and Hilltopper Route, respectively. The Green Line Shopping Shuttle runs exclusively on Saturdays from 4-8 p.m.

Tim McWhorter, assistant director of transportation told the Herald in an interview earlier this year that one of the goals in mind when redesigning the Topper Transit routes was to improve service to the west side of WKU’s campus.

“In years past, the [White Line] went straight down from DSU and Keen Hall,” McWhorter said.

In order to serve the west side of campus this semester, the Hilltopper Route, which is in service from 7:15 a.m. to 9 p.m. on weekdays, turns right towards Kentucky Street from College Heights Boulevard. The bus stops at Kentucky Street, 12th and 13th Avenue and Center Street are meant to be useful for those who live in the Kentucky Street Apartments, Midtown Apartments, and The Columns Apartments, McWhorter said.

The Valley stop has been moved to its original location, which is in front of Hilltopper Hall, and a new stop has been added at McCormack Hall.

Across the boulevard from the McCormack Hall stop is a Big Red Route stop next to Parking Structure 1.

“The students that live at The Registry or McCormack can come to this stop and they’ll travel around to the classroom buildings,” McWhorter said.

Josh Conner, a Murray native who majors in civil engineering, lives at the Registry. He frequently takes the Big Red Route to Cherry Hall.

“It’s easier for students to figure out,” Pulford said.

After 6 p.m., the Hilltopper Route extends to the Kroger store on 711 Campbell Lane until 9 p.m.

“To get up or down the hill, service will be better, the buses will be more frequent in the classroom buildings,” McWhorter said.

Reporter Leo Bertucci can be reached at [email protected] wku.edu