WKU volleyball off to 2nd-best start in program history 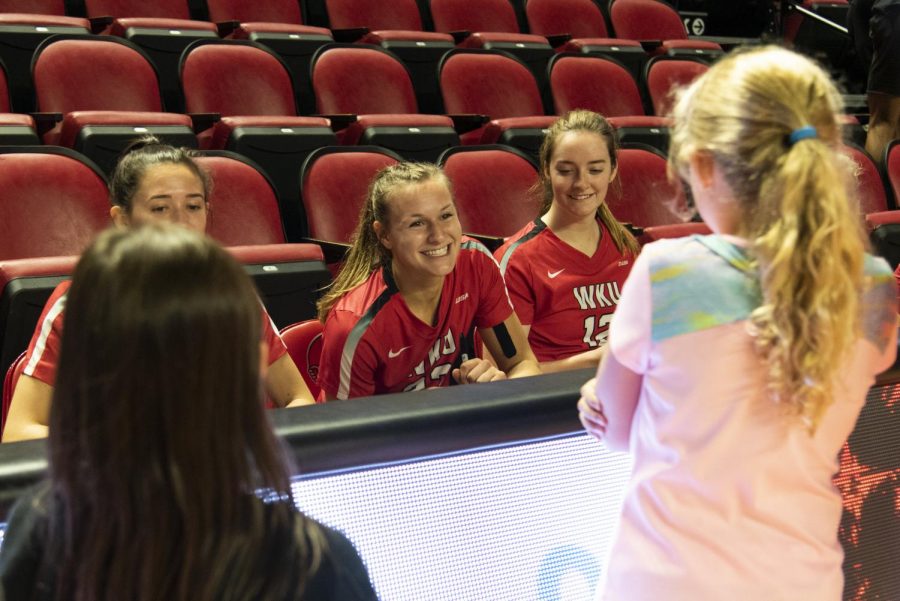 The 2019 Lady Toppers have now tied for the second-best start in program history, matching a 17-1 start by the 2011 squad.

WKU is only one win away from matching the program-best 18-1 opening posted in 2005 and just two victories away from setting a new record.

By defeating Marshall in straight sets on Sunday, the Lady Toppers have also notched 12 sweeps this season — the best mark among NCAA squads.

“They’ve been that special to coach to me all year, just because they’re so much fun,” head coach Travis Hudson said. “They just keep learning and growing and getting better, and the record is a bi-product … We’re vulnerable in some areas, but we do a lot of things well, and so when we’re at the top of our game, it’s going to take a really good team to beat us. We have some of those coming up on our schedule, and we know the challenge is going to be great, but it sure is enjoyable every day with them.”

The Lady Toppers utilized their home-court advantage in a heavily contested battle against the Blue Raiders. WKU went on multiple scoring runs after dropping the second set and later held MTSU to a -.222 hitting percentage in the fourth set to claim a mostly painless 3-1 win.

Sophomore Lauren Matthews had one of her best games of the season, putting up 21 kills.

The Lady Toppers then hosted a red-hot Marshall team. The Thundering Herd were in the midst of a five-game winning streak after defeating Charlotte (10-8, 1-2 C-USA) 3-1 on Friday night.

“We played with great energy throughout the match, but we also executed at a really high level,” Hudson said. “We have won a lot of matches this year being carried by two or three separate phases of the game, and today we were truly clicking on all cylinders.”

WKU kept Marshall to 23 total kills for the match and a .057 hitting percentage, which marked just the second time this season WKU has held an opponent to a hitting clip below .100.

Marshall didn’t score more than 18 points in any set and only reached double-digit kills once. WKU had 14 or more in each set, ending with 47 and a .378 hitting percentage.

“We hit them from every aspect — middle, right side, outside — you can’t defend all three,” sophomore Katie Isenbarger said. “I think we were really balanced and that’s why we did what we did.”

Freshman Paige Briggs ended with a double-double, posting 10 kills and 10 digs. Matthews had 17 kills, while Isenbarger had seven kills and passed 100 total blocks for her career.

Following a pair of home wins, WKU will hit the road for the first time in seven matches and also the Lady Toppers’ first multi-game road trip since the Fleur De Lis Tournament on Sept. 6 and 7.

The Lady Toppers will travel down to Florida to face both of the C-USA schools located in the Sunshine State — Florida Atlantic (8-6, 2-1 C-USA) and Florida International (8-6, 1-2 C-USA).

WKU will meet meet FAU on Friday. The Owls fell 3-2 at FIU on Sunday, but FAU is undefeated at home. The Owls are currently 6-0 in matches played in the Burrow in Boca Raton, Florida.

Since their first-ever match in 2001, the Lady Toppers have never lost to FAU, posting a 23-0 all-time record against the Owls. The closest FAU has come to a win was in 2017, when the match went five sets and WKU won 15-10 in the final frame to take a 3-2 victory.

The Lady Toppers will then meet FIU on Sunday. WKU is on a 13-match winning streak against the Panthers, not losing to them since Nov. 20, 2010, in the Sun Belt Conference Tournament.

The match between the Lady Toppers and Owls is set for 6 p.m. on Friday, while WKU and FIU will get started at noon on Sunday.