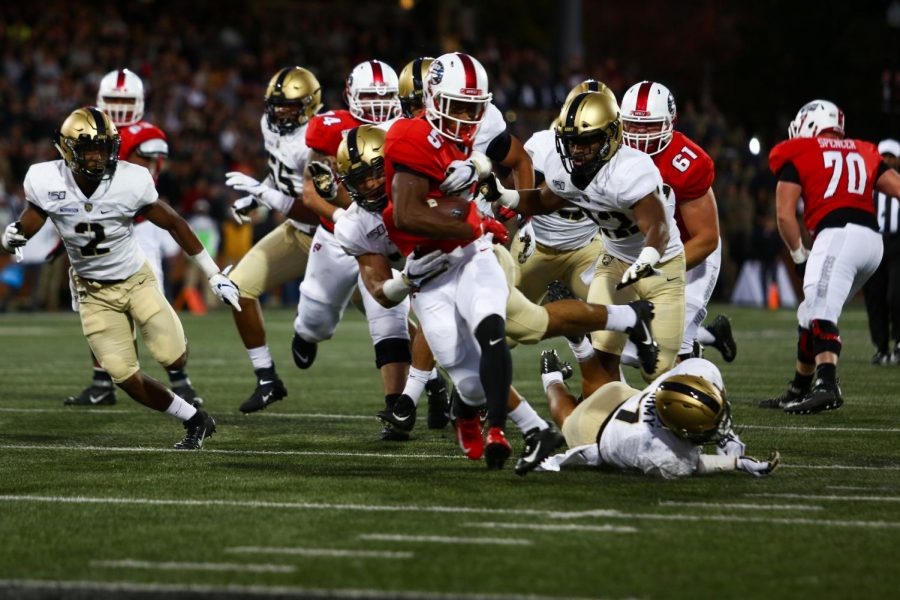 WKU running back Gaej Walker (5) marches through defenders before being stopped short of the goal line. WKU defeated the Army Black Knights 17-8 in Houchens-Smith Stadium on Saturday, Oct. 12, 2019.

WKU maintained its three-game winning streak, as the Hilltoppers outgained Army 365 yards to 208 in a convincing 17-8 home win in Houchens-Smith Stadium.

Head coach Tyson Helton said his team needed a “decisive” victory, and the Hilltoppers got one against the Black Knights.

“I think that’s the biggest thing is not trying to do too much,” Storey said postgame. “Last week, obviously, trying to do too much, throwing an interception. So coming into this week, again knowing the defense we have, our job offensively is to control the game and move the ball. Like I said, give our guys a break and put enough points up to win, so that’s luckily we were able to do.”

WKU outgained the Black Knights 225 yards to 137 on the ground.

“It meant everything,” redshirt junior offensive lineman Seth Joest said postgame. “We fought some men tonight. Hats off to them. They battled with us and it was a tough game. It all starts with the line, so it was everything.”

Army received the opening kickoff, but the Black Knights couldn’t get anything going offensively on their opening drive. The Hilltoppers forced a quick three-and-out after three rushing attempts.

The WKU offense took over at its own 18-yard line for its first drive after the punt.

Storey missed redshirt junior Jahcour Pearson for what would’ve been a long touchdown reception on a second-and-6 play, and the duo failed to connect once again after Pearson dropped a first-down reception on third-and-6. The Hilltoppers punted it away after picking up no first downs.

The Hilltopper defense returned the favor, forcing another three-and-out by the Black Knight offense. Army punter Zach Harding kicked it 36 yards and WKU took over at its own 30.

Neither team had a first down in their first three possessions of the game, but Jacquez Sloan moved the chains for the first time of the contest with a 10-yard reception for WKU.

Storey picked up another first with a sneak on third-and-inches, and WKU was in Army territory for the first time. Jackson followed that with a 22-yard reception, the longest play of the game at that point. Walker got the WKU offense inside the Army 5-yard line after a 16-yard rush.

Storey capped off the drive with a QB sneak from the Black Knight 1-yard line. After an 11-play drive that took 5:24 off the clock, the Hilltoppers led 7-0 with 4:46 left in the opening quarter

The Black Knights finally picked up their initial first down in the game after a 14-yard run by Hobbs. Army converted an all-important fourth-and-1 play at its own 50-yard line after Hopkins Jr. ran the ball three yards into Hilltopper territory to the WKU 47-yard line.

The Black Knights faced another fourth-and-1 at the end of the first quarter, but McCoy converted the second fourth down of the drive for Army after a 3-yard rush to open the second.

An unsportsmanlike conduct penalty on Camden Harrison backed the Black Knights up 15 yards to their own 50-yard line, and Army was eventually forced to punt again.

The Hilltoppers started their next drive at their own 1-yard line after a 35-yard punt from Army punter Zach Potter was downed by Army at that spot.

Pearson dug the Hilltoppers out of the hole they were in after a 17-yard reception that converted another third-down play. Walker followed it up with a 13-yard first down reception of his own.

Garland LaFrance rushed 11 yards for another first down, getting the Hilltoppers close to midfield. Walker added a pair of solid rushes and moved WKU well inside Army territory.

WKU’s drive stalled from there, and the Army defense made a huge stand on a fourth-and-6 play at its own 27-yard line. Storey threw the ball up to Jackson in the end zone after being flushed out of the pocket, but his intended receiver couldn’t come down with the grab.

The Black Knights took over on their own 27-yard line after getting a stop on fourth down, but the Hilltopper defense responded and forced another quick three-and-out by Army.

WKU took over on its 13-yard line after a 53-yard punt by Harding.

Jackson got the next drive going with a first-down reception on a second-and-4 play. Pearson picked up another first down with an 8-yard reception to the WKU 37, and Sloan kept the positive momentum going with a 14-yard rush that got the ball inside Army territory.

The offense went the wrong way after LaFrance rushed for a loss of six yards.  An 11-yard rush by Storey on third-and-14 followed by a 6-yard catch from Pearson on fourth-and-3 down saved the drive and kept the WKU offense on the field for a while longer.

Sloan snagged yet another first-down catch with a 9-yard reception to the Army 21-yard line, and WKU was in field goal range with under a minute to play in the first half.

WKU still led 7-0 at halftime despite the last-minute kicking miscue, as the Hilltoppers outgained the Black Knights 205 yards to 84 in total offense during the first frame.

Storey completed 12-of-19 passes for 96 yards in the first half and added a rushing touchdown. Walker ran for 61 yards on 11 attempts, while Jackson caught three passes for 35 yards.

The Hilltoppers opened the second period with the football at their own 23-yard line after WKU won the opening coin toss and elected to defer.

Walker got the drive going, picking up 10 yards on two carries for a WKU first down. After taking a sack for a loss of one, Storey saved the drive with a 15-yard run on a third-and-11 play.

Sloan kept up the momentum with a 6-yard reception to the Army 43-yard line on a second-and-7 play. Storey rushed nine yards for another WKU first down, but 15 yards got tacked on to the scamper after Army linebacker Jeremiah Lowery was called for targeting.

The targeting call was upheld, and Lowery was then ejected from the contest. Storey later converted another third down with his legs to get WKU inside the Army 10-yard line.

The WKU drive stalled deep in the red zone, but Munson came on and converted a 22-yard field goal to put WKU up 10-0 with 7:27 left in the third quarter.

The Hilltopper defense stood strong yet again, forcing another three-and-out. Army punted it away, and Clayton Bush returned the ball to the WKU 26-yard line. The return was negated after A.J. Brathwaite Jr. was called for a blindside block. WKU then took over at its own 13.

Walker kicked off the drive with a 13-yard rush on first down. The Hilltoppers’ drive then stalled out, and Storey took a costly sack on third down. Army then took over on its own 35-yard line.

Hopkins Jr. completed his first pass of the game on a third-and-four play at the Army 41-yard line, finding Hobbs for a gain of 31 yards and suddenly Army was deep in WKU territory.

McCoy picked up another Army first down later in the drive. Army faced a second-and-5 at the end of the third quarter, which McCoy converted to give Army a first-and-goal at the WKU 4.

Hopkins Jr. could not complete a third down pass, and Army was forced to settle for a 24-yard field goal attempt at the WKU 7-yard line.

Storey got the offense moving with a first down run on a third-and-2 play. Walker followed it up with another first down run to get WKU close to midfield.

Jackson kept the offense on the field with a 7-yard reception to the Army 43-yard line, collecting a key WKU first down. Storey converted another third down on the ground and helped WKU continue to melt the game clock away.

Sloan was able to work the sideline for more good yardage on a 7-yard grab, bring up a third-and-1 play for WKU at the Army 19-yard line.

After a WKU timeout with 5:42 left to play, Storey snuck it and picked up another first down.

Walker ran the ball down to the Army 1-yard line, setting up a first-and-goal. Storey ran it in from 1-yard out for his second touchdown of the game, putting WKU up 17-0 with 4:02 left to play.

Army took over at its own 25-yard line after the ensuing kickoff.

Hopkins Jr. completed his second pass of the game to Harrison for 14 yards to pick up an Army first down. A roughing the passer penalty gave Army an automatic first down later in the drive.

Army finally got on the board after Hopkins Jr. came out throwing once again. He eventually connected with Hancock for a touchdown. Army went for two, and Hancock converted.

WKU still led 17-8 with 1:41 left to play in the game, and the Hilltoppers took over at their own 44-yard line after recovering Army’s attempted onside kick.

Army called all of its timeouts, but WKU held on for a nine-point win in front of its home crowd.

Following the win, WKU will get back into Conference USA action against Charlotte (2-4, 0-2 C-USA) next weekend.

The Hilltoppers will host the 49ers for Homecoming in Houchens-Smith Stadium next Saturday.

Kickoff is set for 3 p.m. on Oct. 19. The game will be streamed live for ESPN+ subscribers.