Milestones in Miami: WKU soccer program picks up win No. 200 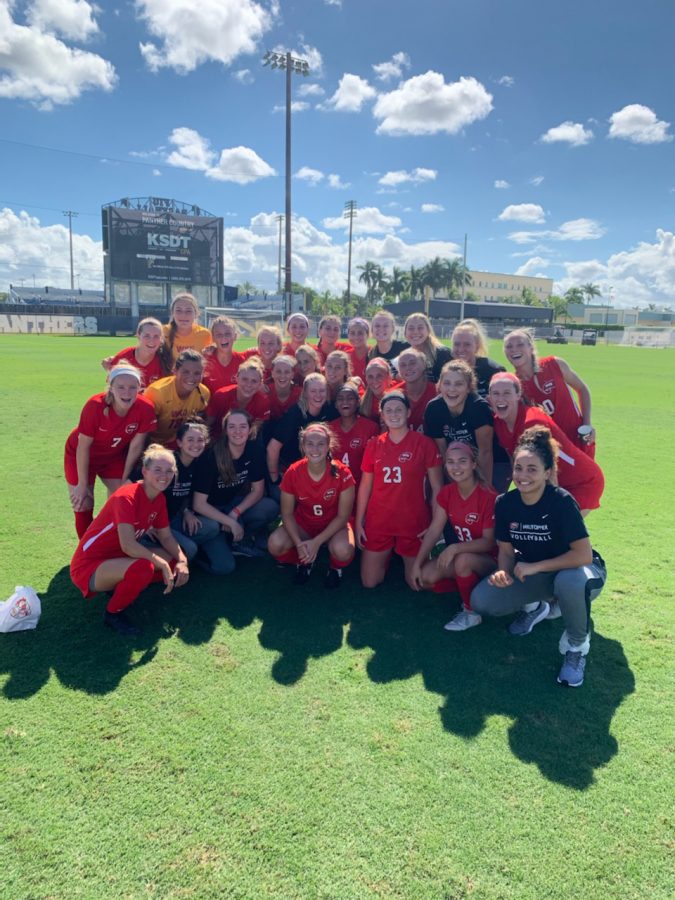 Members of the WKU volleyball and soccer teams pose for a group picture at FIU Soccer Stadium after both programs secured milestone victories in Miami on Oct. 13, 2019.

By clinching two more victories over the Miners and Panthers, WKU also achieved a program milestone — the Lady Toppers picked up wins No. 199 and No. 200 in program history.

As the only head coach in WKU women’s soccer history, the two wins also served as wins No. 199 and win No. 200 in Jason Neidell’s head coaching career.

“The 200th win is a great milestone for our program and an incredible testament to the sweat and tears of all former and current players,” Neidell said in a postgame release.

Winning both matches also put the Lady Toppers in a three-way tie for second place in the league with just four C-USA games remaining before the conference tournament.

Ulliac’s shutout allowed the Lady Toppers to take a 1-0 lead when senior forward Chandler Backes found freshman forward Ansley Cate in the box. Cate then headed it past Miner goalkeeper Emily Parrott for the eventual game-winner at the 51:28 mark in the second half.

Following Cate’s goal, WKU threatened two more times when forwards Victoria Mayo and Ambere Barnett hit the crossbar within 10 seconds of each other. Despite two missed chances, the Lady Toppers held on to win a 1-0 nailbiter on the road.

Junior forward Ashley Leonard scored her team-leading seventh goal of the 2019 campaign to put WKU ahead 1-0 at the 39:32 mark.

FIU would answer back moments later — Sydney Washington scored her first goal of the season at the 40:30 mark and tied the game 1-1 just before the halftime break.

The score was knotted at halftime, but shots on goal were 6-2 in favor of the Lady Toppers.

WKU claimed the lead for good at the 50:45 mark when Barnett drew an FIU defender to her and found redshirt sophomore midfielder Deven Jackson open in the box, allowing Jackson to one-touch it and cash in her fourth goal of the year.

The Lady Toppers sealed the 3-1 win with a third goal at the 81:17 mark. WKU was awarded a corner kick, and Cate scored yet again off the kick from teammate Aleksandra Kožović.

Cate led WKU with two goals over the weekend. The freshman now has five goals in 2019, tying Barnett for second on the team in goals scored this season.

The Mean Green currently have 12 points in the league standings, tying Florida Atlantic (10-3, 4-1 C-USA) and WKU for second place. Rice is not far behind, as the Owls are in sole possession of third place with 11 points.

WKU and North Texas kick off on Friday at 7 p.m. The Lady Toppers then travel 284 miles south to Houston, Texas, to meet Rice at 1 p.m. on Sunday.