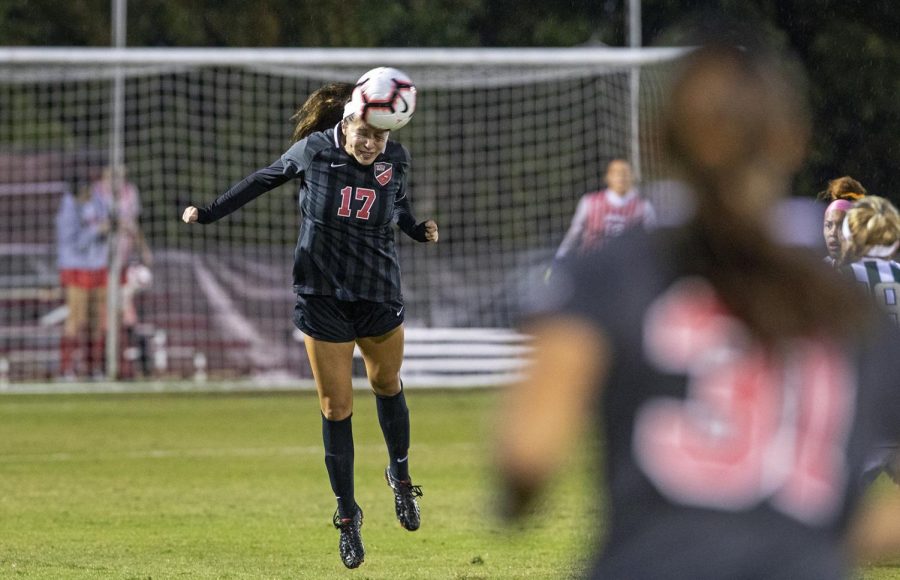 WKU senior Christina Bragado (17) heads the ball against UAB during the first half of the game at the WKU Soccer Complex on Friday, Aug 26, 2019.

Seniors Chandler Backes, Kaylyn Bryant, Christina Bragado and Anne-Marie Ulliac all made contributions during the Lady Toppers’ seventh shutout of the year, and they held their opposition to two shots on net, showcasing the grit they’ve had since the beginning of the season.

The group helped the Lady Toppers move into sole possession of fourth place in the league with 15 points, putting the program in good position for a spot in the eight-team Conference USA Tournament.

“I am really proud of our four seniors,” head coach Jason Neidell said. “They had a fantastic game. Chandler got the game-winner, and Anne made a big save late that saved the game for us. Bryant and Bragado are always rocks in the back and played good games.”

But while competing in their final match at the WKU Soccer Complex, the seniors all added memorable moments to their Lady Topper careers they won’t soon forget.

Backes scored the game-winning goal at the 65:31 mark, making a move to get free from about 20 yards out and sending the ball over goalkeeper Eve Beyer’s head into the top left corner.

Backes’ goal was just her second in 2019, but it was the 20th of her storied career on the Hill.

The Carmel, Indiana, native has the eighth-most goals in program history with 20 and is tied for the eighth-highest total in school history with 48 career points, but Backes made sure to give credit to her teammates both past and present for making her personal accolades a reality.

“It was a great start to my freshman campaign and I cannot take all of the credit for sure,” Backes said. “A lot of it comes from the people behind me and me just finishing that last ball or being in the right place at the right time. I owe it all to my teammates or else I wouldn’t be here.”

Defenders Bryant and Bragado formed a wall that kept UAB from finding the back of the net for the entire contest, as they have many times during their collegiate soccer careers.

Bryant has been one of the mainstays in the WKU backfield during her time on the Hill, starting 34 games while totaling two goals and one assist for five points.

“The energy the whole season has been just so great and so electric,” Bryant said. “As a group, we are really excited, so I hope we can keep carrying this on. Our job is not done and we have some more games to win.”

Bragado has also been a solid player, often tasked with shielding the Lady Toppers. Over her time playing for the program, she scored five points and started 42 games.

“I am so proud of this team and how we fought on the field,” Bragado said. “We need to go out strong and play our game. We’ll go in hard and try to stitch that spot in the conference tournament.”

Ulliac, WKU’s primary goalkeeper this season, tallied a clean sheet in goal and notched her sixth shutout in 2019. She saved the game against UAB, as the Alberta, Canada native made a leaping save to punch a potential late scoring ball back out of the net.

Ulliac has made 65 saves and posted a .971 goals-against average in her lone season playing at WKU, good for the second-most and fifth-best in C-USA, respectively, in 2019.

“Every single day here has been exciting,” Ulliac said. “Just being here overall is exciting, and all of the players and staff here have been incredible. We need to play every game from here on out like it’s our last.”

WKU will conclude the regular season on the road at Marshall (4-13, 2-7 C-USA) this weekend.

Kickoff in Huntington, West Virginia, is set for 6 p.m. on Friday.

“We need to recover from this one game and have good practices this week,” Neidell said. “We will look at some game film from Marshall and figure out how we will go about that game. There are some people we want to get out there for experience before we go on to the conference tournament.”