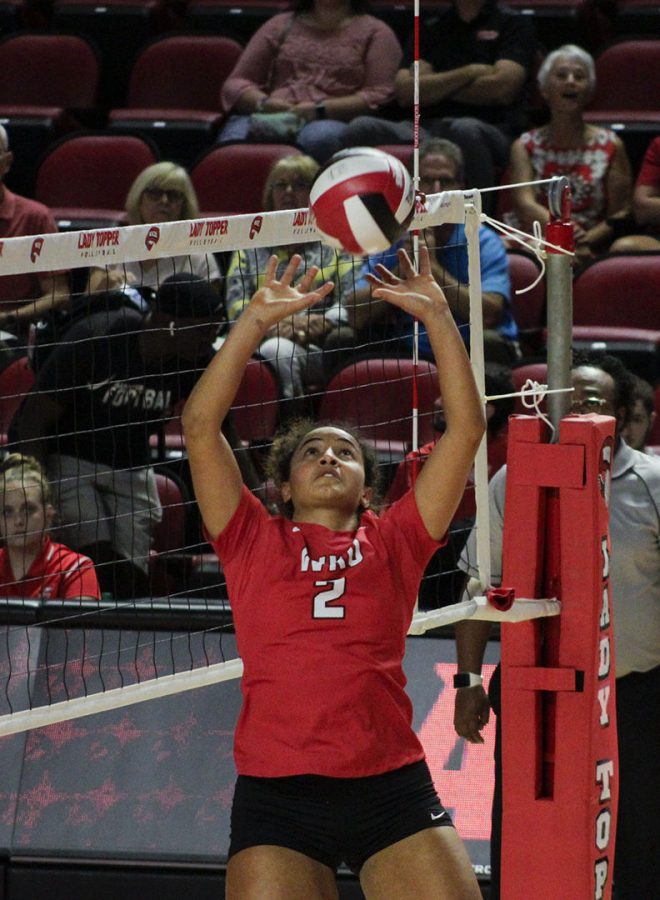 WKU setter Nadia Dieudonne (2) sets the ball to a teammate for a spike during the match with Southern Miss in Diddle Arena Sunday, Sept. 29 2019.

The WKU volleyball team (21-1, 7-0 C-USA) collected more honors on Monday afternoon, as the Lady Toppers moved up one spot to No. 23 in the AVCA Division I Coaches Poll and a pair of newcomers received weekly awards from Conference USA.

The Lady Toppers are currently on a 17-game winning streak, have notched an NCAA-best 15 sweeps this season and have only given up two sets in C-USA play this season.

WKU has continued to add upon the best start in program history, as the Lady Toppers are also the first team in the NCAA to achieve 20 wins in 2019.

Stellar performances from both Dieudonne and Briggs helped the Lady Toppers match the fifth-longest winning streak in program history at 17 straight victories.

Dieudonne delivered a 25-assist, nine-dig, four-kill effort while facilitating the WKU offense to a season-best .442 hitting clip against Middle Tennessee State on Friday. Dieudonne recorded 31 assists, five digs, a block, a kill and an ace as WKU swept then-third place UTSA from Diddle Arena on Sunday.

Briggs is second on the team in total kills with 245 on the season and leads the team in digs with 235.

The Lady Toppers have now collected 13 C-USA awards through the first eight weeks of distribution, and they’re the only team in the league that has earned an award each week.

WKU is also the lone squad to have players recognized for each of the four C-USA weekly awards — Offensive Player, Defensive Player, Setter and Freshman of the Week.

WKU faces UAB on Friday at 7 p.m. in Bartow Arena and Charlotte on Sunday at noon in Halton Arena.