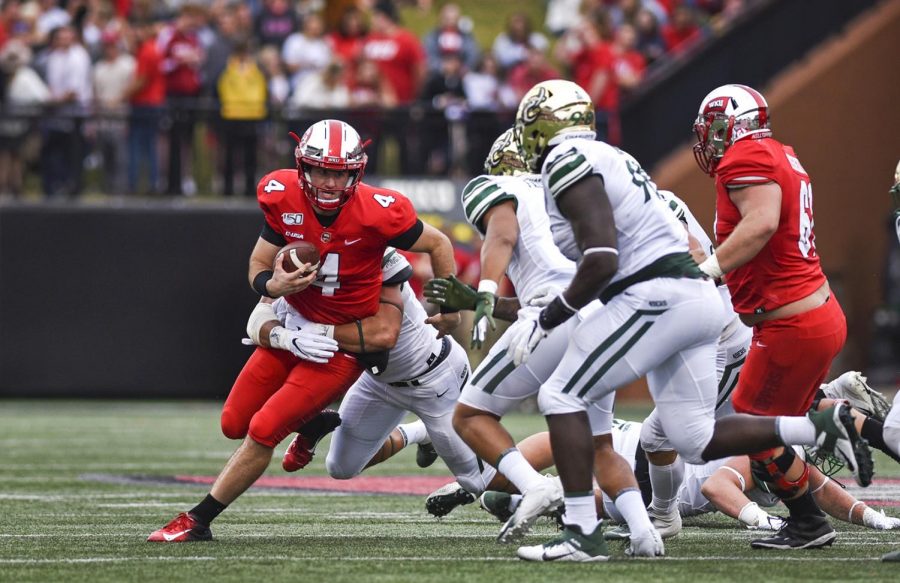 WKU’s Ty Storey (11), runs with the ball away from the Charlotte 49ers during the second quarter of the game on Saturday, October 19, 2019. Hilltoppers defeated Charlotte with a final score of 30-14.

The WKU football team (5-2, 4-0 C-USA) avoided a potential trap game against Charlotte (2-5, 0-3 C-USA) on Saturday, as a Hilltopper offense that came in averaging 21 points per contest outscored a 49er offense averaging 33.7 points per game.

WKU extended its winning streak to four games and stayed undefeated in Conference USA play with style — the Hilltoppers scored on a wide receiver pass, converted a flea-flicker and blocked a punt during a 30-14 win in Houchens-Smith Stadium.

Head coach Tyson Helton said all three of his units pitched in amply during the Hilltoppers’ Homecoming win.

“Great team win tonight,” Helton said postgame. “I really felt like all three phases were really good. Offensively, I was very happy with what we did. We talked about scoring 30 or more. We hit the number right on the head. I think we kick more field goals than anyone in America, but we found a way to win and found 30 points.”

Graduate transfer quarterback Ty Storey completed 21-of-30 passes for 283 yards and two touchdowns. Storey also grabbed an 8-yard touchdown reception from senior Lucky Jackson, who caught five passes for 168 yards and a touchdown. Redshirt junior running back Gaej Walker ran for 70 yards on his 21 carries, while freshman kicker Cory Munson went 3 for 5 on field goal attempts throughout the afternoon.

Storey said he’s found a solid comfort level in the offense and hopes to cut back on any mistakes that harm the offense.

“I feel comfortable,” Storey said postgame. “We left some points out there. I personally left a couple of throws out there that I would like back. I think as we go on in the year, my main goal is to keep knocking down those negative plays and try to put our team in the best position to win.”

The WKU defense held yet another opponent under 300 total yards, as the Charlotte offense only mustered 286 total yards.

The offense stayed hot with a back-shoulder fade completed to Tucker for 21 yards to the WKU 27-yard line. Reynolds kept the ball again, and he picked up another first down with his legs to get the 49ers in the red zone.

Charlotte eventually struck first with a 4-yard rushing touchdown from Ishod Finger, and the 49ers led WKU 7-0 with 7:12 left to play in the opening quarter. Charlotte’s scoring drive lasted 14 plays, covered 75 yards and took 7:48 off the clock.

WKU did not run a single play until the 7:12 mark of the first quarter. Quin Jernighan got the offense going with a catch for a WKU first down, but he had to be tended to after the play.

Walker and Storey kept the chains moving with a pair of solid rushing gains. Jacquez Sloan got WKU in Charlotte territory for the first time with a 14-yard catch to the Charlotte 38-yard line. Simon followed it up with another first down catch on the next play, reaching the Charlotte 21.

Alex Highsmith backed up WKU to the Charlotte 30-yard line with a sack for a loss of 8 yards on second down. The next play, Storey found a wide-open Pearson for a 30-yard touchdown reception on a third-and-19 play. WKU tied it up 7-7 with 52 seconds left in the first frame.

Charlotte stayed hot on offense, starting its next drive with a 26-yard completion to Tucker shortly before the end of the first quarter. The drive stretched into the second quarter, but the 49ers were forced to punt after a 15-yard penalty and an incomplete pass on third down.

WKU took over at its own 20-yard line. Walker got the drive started with a pair of solid runs to the WKU 31-yard line, giving his team some wiggle room offensively after the first down.

The Hilltoppers then dug into their bag of tricks and pulled out a nice flea-flicker play that went for a 69-yard touchdown pass to Jackson. WKU led 14-7 with 12:45 left in the second quarter.

The 49ers got the drive started with a first-down reception for Tucker, this one covering 31 yards. Tucker then converted another Charlotte third down, moving the 49ers to the WKU 31-yard line with another solid reception on a third-and-6 play.

The Charlotte offense got backed up by a penalty and a DeAngelo Malone sack for a loss of 6 yards, but Reynolds connected with LeMay for a 47-yard touchdown on a second-and-26 play.

Charlotte tied the score at 14-14 with exactly nine minutes left to play before halftime.

WKU stuck with the ground game on its third possession. Storey executed a quarterback sneak to convert a third-and-1 play at the WKU 34-yard line. Jackson came up big again, this time snagging an 11-yard reception to move the sticks to the WKU 49-yard line.

A defensive pass interference call on 49er cornerback Jonnie Pitman gave WKU 15 yards and an automatic first down at the Charlotte 32-yard line, but WKU couldn’t convert a third-and-5 play and was eventually forced to try a 45-yard field goal attempt.

The WKU defense got a big stop on Charlotte’s next drive, forcing a quick three-and-out. WKU took two consecutive timeouts and Charlotte took a timeout of its own, but the 49ers eventually punted it away. WKU then took over at its own 32-yard line with 2:32 left to play before halftime.

Jahcour Pearson got the drive going with a 19-yard reception for a first down. Storey kept the drive alive with a 7-yard rush to pick up a first down at the Charlotte 27-yard line. WKU would eventually be forced to settle for a field goal try after Storey took a sack for a loss of 7 yards on first down.

Reynolds completed 7-of-11 passes for 144 yards and a touchdown. LeMay ran the ball 12 times for 38 yards along with a 47-yard touchdown reception. Tucker caught four passes for 86 yards.

The Hilltoppers got started at their 22-yard line. The 49er defense forced the first three-and-out of the game for the WKU offense, and Charlotte took over at its own 38-yard line after the punt.

The WKU defense returned the favor, getting the 49er offense off the field in three plays.

The Hilltoppers couldn’t take advantage of their good field position — Storey took a sack for a loss of 6 yards on a third-and-4 play, which forced another field goal try from Munson.

LeMay converted a third-and-1 play to get the 49er offense back on track. A defensive pass interference call on junior cornerback Roger Cray gave the 49er offense an automatic first down at the WKU 48-yard line, and Charlotte looked poised to continue its drive.

But Cray ended the 49er drive in abrupt fashion by picking up an interception on the very next play, giving WKU the ball back at its own 26-yard line.

Jackson broke a big one, snagging a 46-yard reception to get WKU to the Charlotte 28.

WKU’s drive stalled from there, as Storey was sacked once again on a second-and-7 play at the Charlotte 25-yard line. Helton then called upon his kicker for yet another field goal attempt.

The WKU defense held strong yet again, forcing the Charlotte offense into another three-and-out. WKU took over at its own 33-yard line after the punt.

A late hit by Charlotte linebacker Jeff Gemmell tacked on 15 yards to a Walker run, moving WKU into 49er territory. The 49er defense got its stop, but an unsportsmanlike conduct penalty on defensive back Marquill Osborne extended the WKU drive further.

Storey rushed for a gain of 8 yards on a fourth-and-2 play at the Charlotte 21-yard line, and WKU was in the red zone once again after Helton’s gamble.

WKU then dug even deeper into its bag of tricks, as Jackson completed a pass to Storey for an 8-yard touchdown play. WKU led 30-14 with eight seconds left in the third quarter.

Charlotte took its next drive into the fourth quarter. Reynolds picked up a couple of first downs with his arm and his legs to get Charlotte moving, but the 49ers were forced to take their third and final timeout with 12:18 left to play in the fourth quarter.

The 49ers converted a third-and-6 play, but a penalty nullified an 11-yard run from LeMay. WKU made a key stop on the next play, forcing another punt and regaining possession at its own 20.

Sloan picked up a nice gain on first down, and Walker moved the sticks to the WKU 46-yard line on the next play. Pearson moved WKU into Charlotte territory with a 15-yard reception.

After the WKU drive stalled out, Munson hit the left upright and failed to convert another 48-yard field goal attempt. The score remained 30-14 in favor of WKU with 6:56 left in the game.

The WKU defense forced a turnover on downs after stopping Charlotte on a fourth-and-5 play at the Charlotte 35-yard line. WKU took over at the 49er 39-yard line after its stop.

The Hilltoppers drained the clock a bit and eventually punted the ball back to Charlotte. The 49ers turned the football over on downs after five plays and two minutes of clock time.

WKU regained possession, took a few knees and escaped with a 16-point win.

Following the win, WKU will continue C-USA play against Marshall (4-3, 2-1 C-USA) next weekend.

The Hilltoppers will travel to face the Thundering Herd in Joan C. Edwards Stadium in Huntington, West Virginia, next Saturday.