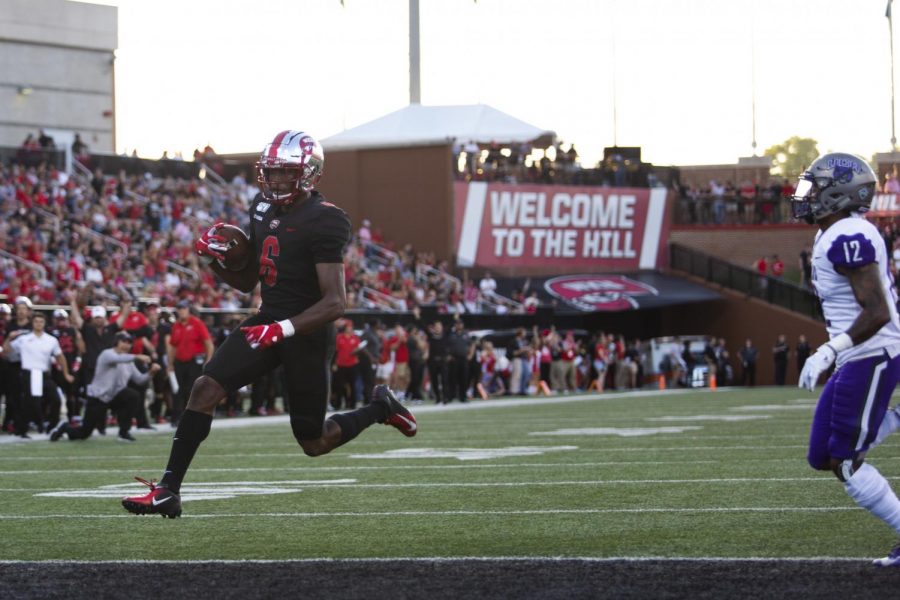 WKU tight end Joshua Simon (6) prances into the end zone for his first score of the season on August 29 2019 at Houchens Smith Stadium. Central Arkansas won 35-28.

With the regular season now at its halfway point, the Football Writers Association of America released its 2019 Midseason Watch List for the Freshman All-American Team on Wednesday afternoon.

First-year standouts from across the country were named to the list, and one of the 70 student-athletes honored was WKU tight end Joshua Simon.

Simon is one of just two tight ends to earn the recognition. The only other tight end on the list was Texas A&M’s Jalen Wydermyer, who has 13 receptions for 172 yards and four touchdowns so far this season.

Simon is one of 41 true freshmen to make the list, and he’s also one of only four players selected from Conference USA.

The Dalzell, South Carolina, native has posted impressive numbers through the first seven games of his rookie campaign on the Hill.

The 6-foot-5, 235-pounder has hauled in 11 catches for 190 yards so far this season. He ranks first on the team with a 17.27 yards per catch average while tying for the top spot with four touchdowns.

Simon also owns the season-long reception for the Hilltoppers, recording a 77-yard touchdown catch against Louisville on Sept. 14.

The Hilltoppers will travel to face the Thundering Herd in Joan C. Edwards Stadium in Huntington, West Virginia, on Saturday. Kickoff is set for 1:30 p.m. The game will be streamed on Facebook Live.