WKU falls to No. 2 Kentucky in Sweet Sixteen 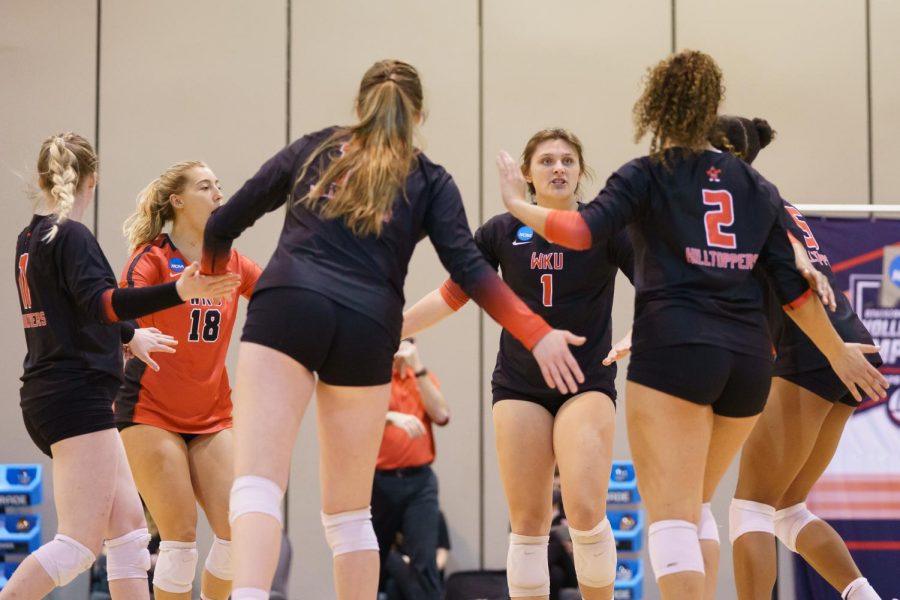 The Hilltoppers meeting between serves in the Sweet Sixteen of the NCAA Tournament on April 18, 2021. WKU fell in three sets to No. 2 Kentucky.

This was the furthest WKU volleyball had ever made in the NCAA Tournament.

“Certainly not the match we wanted to play, it was a bad night to have a bad night,” head coach Travis Hudson said. “We played an awfully good team in Kentucky, they are championship caliber and I think they have a chance to continue to go deeper into the tournament.”

“If you’re a competitor you’re disappointed when your time is over regardless of how deep you ran,” Hudson said. “Our kids expected to keep playing and I expected to keep coaching. There’s nothing that can happen that can take away from what this group has done.”

Kentucky junior Alli Stumler led the Wildcats with 17 kills with a .483 hitting percentage. Senior Madison Lilley led Kentucky with nine digs and 38 assists out of her team’s 45.

Junior Lauren Matthews and sophomore Avri Davis hit the first kills of the night for the Hilltoppers, getting the second and third points for the team.

A WKU attack error and a kill by junior Alli Stumler were able to give Kentucky a two-point lead 7-5. A kill by senior Kayland Jackson knotted up the score at nine, but the next play Kentucky blocked a WKU ball, giving the Wildcats a 10-9 lead.

A block from Matthews and a Kentucky attack error pushed the Hilltoppers up 11-10. Matthews then cleared a big kill again tying the set at 13 apiece.

Kentucky was able to break through the tie with a 15-13 score heading into the first media timeout of the match.

A memorial to Alyssa Cavanaugh, former Lady Topper, was shown during part of a match break Sunday.

Cavanaugh’s last match in her number seven jersey for WKU was in 2017, where the Lady Toppers were facing Kentucky.

WKU donned ‘AC’ patches on their jerseys throughout the season, and before the media break, the announcer for the match panned to the patch on one of the player’s jerseys.

Matthews and Briggs came out of the timeout with a block to a Wildcat ball. Back-to-back kills from Avery Skinners brought Kentucky’s two newfound three and four-point leads. The 21-17 lead meant Hudson calling a timeout for the Lady Toppers.

Jackson came out of the timeout with a kill. Skinner brought back the four-point lead for her team with a kill, but Jackson fired back again with a kill, shortening Kentucky’s lead 22-19.

A kill by Kentucky’s Madi Skinner and a block from her and Goetzinger let the Wildcats win set one 25-20. This is the seventh set loss WKU has faced all season, three of which have occurred in the NCAA Tournament.

“The first set went kind of the way we wanted it to,” Hudson said. “I told our kids we got to find a way to get it to 18 or 17 all and hope to make plays. Even though we weren’t the ones that made the plays at the end of the first set I felt good about where we were.”

Kentucky’s Skinner and Goetzinger began the second set with a block to Jackson’s ball. A kill by Davis assisted by Dieudonne got WKU its first point of the set.

After Briggs had a ball blocked, she fired back with her third kill of the match to cut the deficit early on 4-3.

A kill from Skinner brought the score to 11-6, the largest lead Kentucky had seen so far. WKU then called its second timeout of the match. To this point of the second set, WKU was held to a .000 hitting percentage.

A WKU attack error followed the timeout, which was then continued by a kill from Matthews, her fourth of the match.

Another attack error hailing from the Hilltoppers gave Kentucky another largest lead, 16-8. Kentucky was able to see another eight-point lead after a kill from Alli Stumler. WKU was then forced to call a timeout.

A kill by Briggs kicked off play after the timeout. Senior Taylor Bebout was substituted for Dieudonne after Dieudonne took a ball to the face. Immediately after coming out onto the court, Bebout assisted her first kill of the match for Matthews, getting the Hilltoppers their 14th point of the set.

Kentucky got to set point 24-16 with a kill from Stumler. A block from Lilley and Azhani Tealer brought in set two 25-16 for the Wildcats.

“You can’t lose your quarterback at this stage of the game and expect to raise your level if you understand what I mean,” Hudson said of Dieudonne’s injury. “A match like this is not the time when you want to lose Nadia Dieudonne.”

WKU began the third set of the match without Dieudonne after suffering a kill to her face. Hudson said it was more a vision issue with Dieudonne and focusing on the ball.

For the third time Monday night, the Wildcats were able to get on the scoreboard first, with a block from Goetzinger and Lilley. Kentucky was able to go on an early 3-0 run, which was ended by a kill from Matthews.

A kill by Wildcat Stumler brought Kentucky’s lead up to five points at the first media break of the third set. Kentucky was then able to see a new seven-point lead after Tealer hit the second ace of the match.

Dieudonne came back in after a kill by Stumler and resumed duties setting for her teammates.

The 4-0 run Kentucky was on increased its lead to 13-5 with a kill from Goetzinger. The run was cut by a Kentucky service error.

The Wildcats saw a 10-point lead for the first time after WKU committed an attack error. A kill by Stumler brought the Wildcats’ lead up to 11, but a kill from Briggs brought it back down. Another kill by Stumler allowed Kentucky’s 20th point of the set.

Stumler’s 16th kill of the match brought the score to 22-9 in the Wildcats’ 4-0 run. A WKU attack error led set three to setpoint. WKU had a .093 average hitting percentage in Sunday’s match, Kentucky was hitting .450.

“We didn’t know what to expect, it’s been difficult,” Isenbarger said. “I think harder than we really realized until after the fact because we are so exhausted and things like that. Just being in the hotel for a week, and it’s just nothing that we’re used to, and nothing that anyone’s used to.”

WKU’s last play of the season would be a kill by junior Katie Isenbarger.

Kentucky finished off set three 25-10 with a kill from Stumler.

“I just knew that I wanted to go out swinging,” Isenbarger said. “I think that’s what most of us were thinking. We wanted to be fearless.”