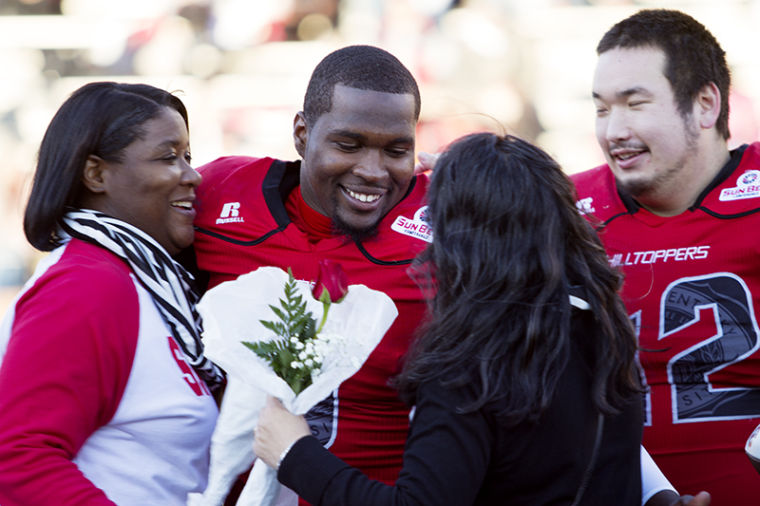 Western Kentucky Hilltoppers running back Antonio Andrews and fullback Nick Baisch (42) stand with family during senior day ceremonies before Saturday's game against Arkansas State. Western Kentucky lead 20-14 at the half.

WKU Athletics has maintained its highest Graduation Success Rate in program history, according to the latest report released by the NCAA on Wednesday.

WKU’s overall GSR was reported at 85, matching last year’s rating that ranked as the athletic department’s top mark since the report was first published in the early 2000s. The newest batch of GSR scores were based on the four Division I freshmen classes entering from 2009 to 2012.

Of the university’s 12 NCAA sports, and nine WKU programs either improved or maintained their GSR scores from the previous year.

WKU’s 64% Federal Graduation Rate is also the second-highest in program history, and 12% higher than the university’s general student body rate of 52%.

“These numbers reflect a tremendous commitment to excelling both on and off the field by our student-athletes, coaches and entire athletic department,” athletic director Todd Stewart said in a press release. “To lead Conference USA with 25 total championships since joining the league in 2014, while our student-athletes are also graduating at all-time high levels, speaks volumes about their dedication in all facets of the total college experience.”

The university’s 85 overall GSR is tied for the sixth-highest in Conference USA, and WKU is one of six programs in the conference with at least five teams with a perfect 100 GSR score.

WKU’s GSR scores came in above the national average in baseball (90), men’s basketball (91), softball (95) and the five programs with perfect scores.

You can find the national averages of each Division I sport from the NCAA here.

The NCAA’s GSR rates calculations are based on the number of student-athletes who graduated within six years of their initial enrollment, in addition to those who left an institution prior to graduating but would’ve been academically eligible to compete, according to a release.

“College athletes continue to meet and exceed the benchmarks set for academic achievement,” NCAA President Mark Emmert said in a press release. “They have surpassed the original goal by nearly 10 percentage points, a phenomenal achievement that highlights the commitment these students have to succeed in all areas of life.”