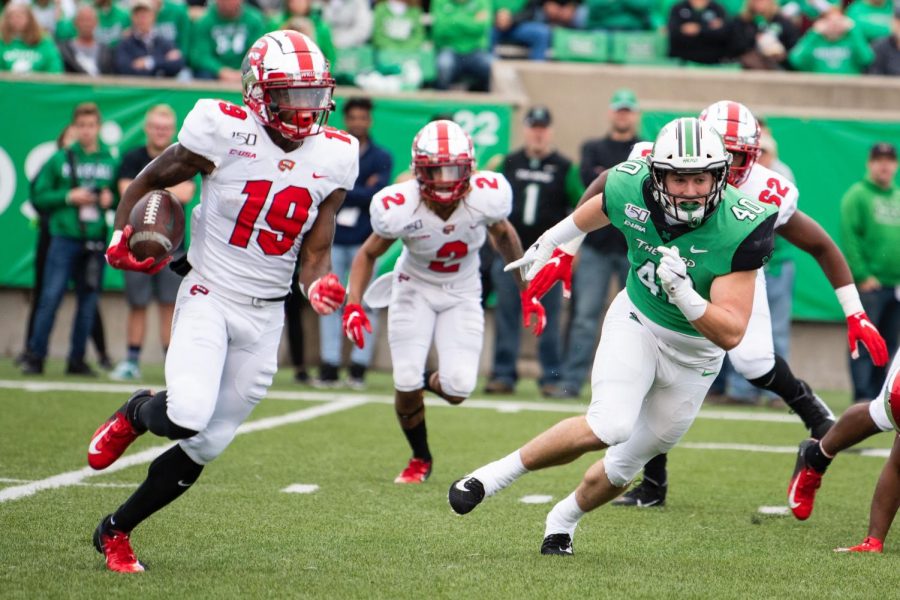 With six seconds left in the game, the score was knotted 23-23. WKU had battled back from a 17-0 hole early in the second quarter and looked poised to drag the contest into overtime, but its fate ultimately rested on preventing another field goal after a late push by the Thundering Herd.

Marshall kicker Justin Rohrwasser — who’d already established a new career-long field goal after netting a 46-yard attempt earlier in the contest — had an opportunity to win the game for the Thundering Herd with a 53-yard field goal attempt as time expired.

Head coach Tyson Helton called two timeouts in an attempt to ice the redshirt senior, forcing Rohrwasser to boot two successful attempts before his third and final kick. With no timeouts left to call, the Hilltoppers could only watch as Rohrwasser officially put WKU away for good, 26-23.

As the kick sailed through the uprights, the Hilltoppers had their four-game winning streak snapped and ceded some of the ground they’d claimed in the C-USA East Division race.

Helton said it was a hard-fought game his players battled hard to win, but WKU came up just short.

“I expect nothing less,” Helton said about the comeback. “We have a great group. They’re always going to battle. There’s no quit, no getting down. We went in the locker room at halftime, and you wouldn’t know whether we were up or down. Guys regrouped, talked about the adjustments we needed to make, came out here and battled in the second half.”

The loss was a shocker for WKU. The Hilltoppers lost a shot at securing bowl eligibility before the calendar turned to November, and the red-hot WKU defense looked vulnerable again after weeks of posting absolutely dominant performances against opposing offensive units.

The WKU offense seemingly found its stride, as offensive coordinator Bryan Ellis’ group scored 23 points, which was its second-best outing in C-USA play, and posted 426 yards of total offense, which was the most the Hilltoppers have posted in any conference game yet.

Although two early turnovers were very costly and immediately translated to points for the Thundering Herd, WKU put together one of its best offensive performances in 2019. Unlike in the previous conference games, a surging offense picked up the slack for a struggling defense.

Helton said he was proud of the effort his offense gave against Marshall.

“I thought Ty battled extremely hard, sat in the pocket really well, took some hits, kept his eyes downfield,” Helton said. “Just did a great job of leading the team. Lucky made a lot of great catches, and all of our guys did some great things. Thought Gaej made some really nice runs when we needed it down there. There’s a lot of good ball being played, the guys are battling hard.”

Jackson caught a WKU-record 16 passes for a career-high 168 yards from Storey, including multiple gains of 20-plus yards. Jackson also became the first Football Bowl Subdivision receiver with 16-plus receptions in a game since SMU’s Trey Quinn on Oct. 21, 2017.

Jackson credited solid play calling with helping the offense get into a groove.

“It was big for us — coach made some great play calls and we were able to connect,” Jackson said. ‘We were on the same page the whole game, so definitely good that it happened for us. There’s always opportunities, but we just kind of take advantage of what they give us.”

Junior safety Antwon Kincade said the WKU offense absolutely made the necessary plays to win, and the defense will have work to fix its mistakes.

“It was a good job by our offense — they had our back this game,” Kincade said. “Seeing Ty Storey and Lucky Jackson and Gaej Walker in the fourth quarter, it came down to the wire. They were very clutch for us and everything like that. Defensively, we fought our butts off. We’re a great defense in the fourth quarter. I just felt like we should have pulled that one out. But we’ll come back to work tomorrow and we’re going to grind.”

The Hilltopper defense gave up 26 points after only allowing 11 points per game against league foes, and the 401 yards of total offense Marshall racked up throughout the afternoon was by far the most yardage defensive coordinator Clayton White’s group has allowed in C-USA play.

The defense didn’t force a turnover, registering only one sack on just four quarterback hits.

The WKU offense put its defensive unit in a tough spot with back-to-back turnovers to open the game, but the defense couldn’t get off the field throughout the matchup.

The 17 unanswered points Marshall posted early on proved to be too much for WKU to overcome in the end.

Kincade said the defense failed to overcome a slow start, but the unit will work to improve.

“In practice we always talk about it — we go through four phases — first quarter, second quarter, third quarter, fourth quarter,” Kincade said. “Unfortunately today we started slow, but we know we have a great team. We have a great defense, we all play as one, we don’t point fingers or anything like that. Next game we’re going to come out, start fast and finish.”

The Hilltoppers will host head coach Lane Kiffin and the FAU Owls in Houchens-Smith Stadium on Saturday for another matchup that’ll be integral to the ongoing C-USA East Division race.

Kickoff is set for 3 p.m. The game will be streamed live for ESPN+ subscribers.