Underdogs no more: WKU football 2 wins away from bowl eligibility after rough start 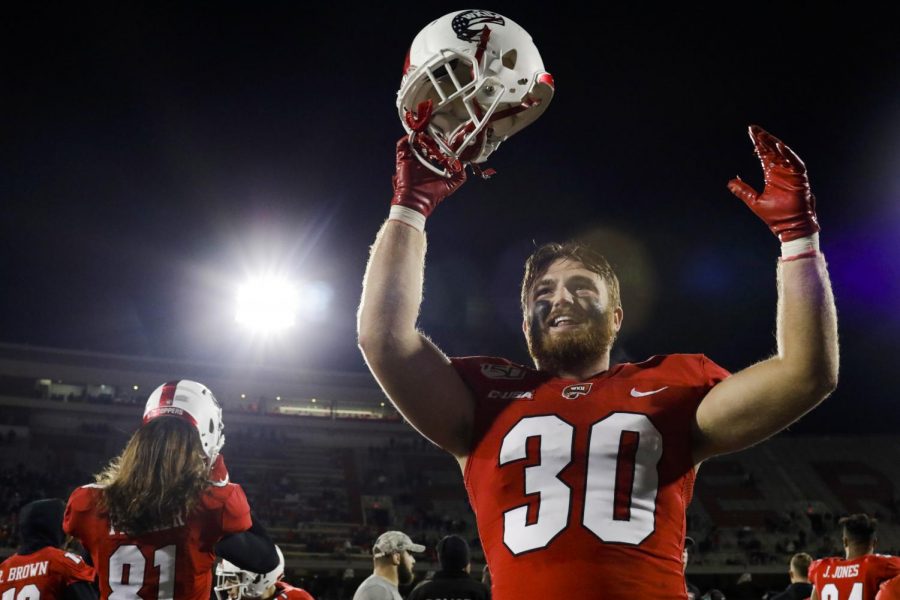 WKU’s linebacker Clay Davis celebrates his team’s win against the Army Black Nights after the game in Houchens-Smith Stadium on Saturday, Oct. 12, 2019. This is the third win in a row for the Hilltoppers.

After a miserable 3-9 record in 2018, first-year head coach Tyson Helton was hired to replace former head coach Mike Sanford. Helton was tasked with guiding WKU to a rebound season, but early on it seemed like the WKU football team was headed for a similar fate in 2019.

Inconsistent quarterback play also plagued the WKU offense, as redshirt junior Steven Duncan threw five touchdowns and four interceptions in the three games he started prior to his season-ending foot injury against Louisville on Sept. 14.

When Helton announced he would be looking for a new starting quarterback, the WKU football team sat at 1-2 and entered its first bye week of 2019 with more questions than answers.

Just four weeks later, the Hilltoppers’ outlook for the 2019 season has completely changed.

So far, the differences have been a lights-out defensive unit and a Hilltopper offense — guided by Arkansas graduate transfer Ty Storey — that can effectively manage the game.

The WKU defense has been nothing short of incredible since the first bye week. The unit has only given up 24 total points in three wins, good for just eight points per game. Additionally, no opponent has topped 300 yards of total offense against the Hilltoppers in that span.

The WKU offense hasn’t scored more than 20 points in any of the team’s four victories, but the Hilltoppers have managed the game by chewing clock and limiting turnovers.

Storey became the starter after Duncan went down, and he’s embraced his role as a game manager. The former SEC starting quarterback has posted 522 yards through the air, 100 yards on the ground and five total touchdowns compared to just one interception.

“With our defense, it’s our job to control the game,” Storey said. “That’s what we have to do. Obviously everyone wants to put up points, wants to go light up the scoreboard. But at the end of the day, if we’re winning, everyone is happy. It doesn’t matter. What we’re trying to do is continue to put up points but to limit the turnovers as much as we can. Obviously they’re going to happen, but we got to just keep driving — long drives and let our defense rest.”

A new-look offense and red-hot defense were both on full display in a 17-8 statement win against Army on Saturday night.

The team’s newfound offensive philosophy worked to perfection, as the Hilltoppers didn’t turn the ball over and won the time of possession battle 38:07 to 21:53 against a Black Knight offense known for its ability to sustain long-winded drives.

The Hilltoppers also won decisively in the trenches on both sides of the football, as evidenced by the game’s rushing totals — WKU outgained Army’s triple-option offense 225 yards to 137.

Redshirt senior defensive lineman Jaylon George said the offense and defense fed off each other during the dominant victory.

“It was definitely a team win,” George said. “They helped us out, and we helped them out. Us getting the three-and-outs and them driving the ball and basically Army-ing Army. That was really good to see.”

“The offense, in my opinion, is getting better and better,” Helton said. “They’re really starting to gel. Gaej ran the ball well tonight. The offensive line did a fabulous job in the run and passing game. Ty handled and managed the offense extremely well. Four or five times you saw Ty break out and run with it. He really put us in a position to move the chains. I thought we did a lot of great things offensively.”

The defense completely manhandled the Black Knights for a majority of the game, forcing a three-and-out on most of their offensive possessions. WKU even carried a shutout into the late innings until Army was finally able to hit paydirt on its final possession of the night.

Junior safety Antwon Kincade said the difference between this year’s defense compared to last year’s is the commitment to the job at hand.

“Last year, defense was under the rug,” Kincade said. “Giving up a whole lot of passing yards and rushing yards and everything. The key this offseason was to lock in and key into our 99%. There’s 11 guys on the field — 99%. One percent are the coaches — makes 100%. So, we just all had to lock in on our job, read our keys, make plays — for us. Don’t try to do too much, don’t try to be the bigger person out there, because everybody’s equal out there.”

The Hilltoppers have embraced their role as an underdog after their early season struggles, and that mentality was apparent against Army. But after the big win, Kincade thinks it may be time to put the underdog narrative to rest.

“Like coach Helton said at the beginning of the day today, ‘We’re tired of being the underdog coming into games,’” Kincade said. “So tonight was a statement — we had to make a statement to the world and everything. We know Army played good teams like Michigan really well, so we were going to come out, be the big dog and delete the underdog status.”

Even with a promising first half of the season in the books, Helton and the rest of the Hilltoppers know there is a lot of football left to be played — six games, to be exact.

Just two wins away from clinching bowl eligibility, a trip to a postseason bowl game is very much a possibility after WKU was left sitting at home during the 2018 postseason.

The second half of the schedule sets up well for WKU, as the Hilltoppers’ final six opponents have a combined 17-19 record. But the team’s five remaining C-USA opponents have posted a solid 6-4 record in league play to this point, and several of those opponents are also rivals.

Helton said the win over Army is a huge confidence boost to his team, but there’s much more for the Hilltoppers to conquer beyond a single game in October.

“I think it puts us on a path to where our team probably finally realizes that we can be a really good football team,” Helton said. “There’s a lot still ahead of us to accomplish, but it says to us you can go out there and be a very special football team. You have to keep working hard, you have to have an edge, and you have to do all of the right things. It makes a statement about our team and what we’re trying to accomplish.”

The Hilltoppers will look to move their winning streak to four straight against Charlotte (2-4, 0-2 C-USA) on Saturday afternoon. Kickoff in Houchens-Smith Stadium for WKU’s Homecoming contest is set for 3 p.m. The game will be streamed live for ESPN+ subscribers.