‘Great to be 21’: What it’s like to be a Bowling Green bar hopper 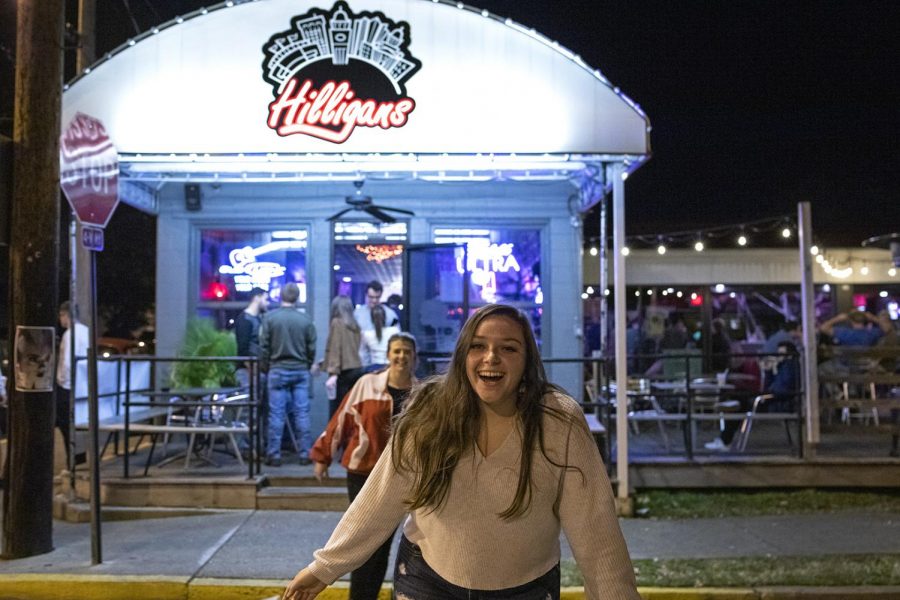 Julie Sisler goes bar hopping at Hilligan's and Hideout for her 21st birthday on Thursday, Oct. 24, 2019.

I’m standing outside the promised land.

I’ve walked and driven past Hilligan’s Sports Bar multiple times a week since freshman year, always hoping to catch a peek past the security guards into the wonderful world of alcohol and … and what? I have no idea. It’s like the “cool kids club” everyone talks about but nobody outside is allowed to know about.

But now, as a newly christened legal drinker, I’m prepared to learn what all the hype is about. It’s time to get to drinking — I mean, working.

Even before I stepped foot on Hilligan’s property, I was nervous. I texted my guide for the night, my friend Tyler, confirming and re-confirming the plan. We would meet up with Herald photographer Reed Mattison, who would photograph the occasion, for the night at Hilligan’s, then make our way to Hideout bar and eventually see where the night took us.

I got dropped off at Hilligan’s shortly after 10 p.m., and when Reed, who also happens to be a bartender, got there, I asked if he had any last-minute advice. His thoughts were simple: Get the true bar experience, which can only happen when you’re not sober.

Tyler backed this up as soon as we got inside, saying it’s a must to “pregame” — begin drinking prior to a social event where further drinking will ensue — before you even get to the bars. This is to save your money and your sanity, since bars are fun but not exactly somewhere you want to be while sober. I can attest to this.

The second I stepped inside Hilligan’s, I was both overwhelmed and underwhelmed. The floor was a little sticky, and there was a strange humidity in the air even though it was inside and the place was not particularly packed aside from a mass of people huddled around the bar.

As the bouncer checked my ID and scanned me over, I was strangely nervous. Despite knowing I was 21 and legally able to be there, there was something intimidating about the fact I was suddenly there when just a few days prior I couldn’t be.

The room was dimly lit, which is somehow comforting. The only way to be heard is to shout, so Tyler, Reed and I stood in a circle shouting in each other’s ears.

I couldn’t stop looking around, trying to take in every detail. But as I did, I became aware of how much I was hyping the place up as I stood there. I was in the cool kids club, only it’s not really that … cool?

It occurred to me the details of the building would seem much cooler if they were a little blurry, maybe even tilted a tad. I decided I needed a drink (or two) before I could properly make an assessment.

Tip #2: Know your deals or prepare to pay dearly

I turned to Tyler and asked what drink he recommended me getting to start off my night. His answer was simple: Whatever is cheapest.

Tyler explained bars will suck you dry, so it’s important to know what the deals are. This is even more important if you didn’t pregame but intend to get fully drunk. He said to find these wherever they’re posted throughout the bar, on social media or just by asking the bartender (if you can shout loud enough).

We made our way to the bar, where Tyler flagged down the bartender and asked for the deals. We each got a drink, myself following Reed’s lead and getting a double vodka cranberry. The drink was about $5, but while I expected it would be cheaply made and watered down, the bartender just kept pouring in the vodka. As a “lightweight,” I began to wonder if this was going to be a very good or very bad night.

We grabbed our drinks, and Tyler gave a grand tour of the building. I was surprised to find out how big it was and that there was a solid number of people eating full meals at the tables inside. I was informed Hilligan’s has the best pizza, which is a must-have when wrapping up the evening. The atmosphere wasn’t the crazy one I expected — one with dancing on the bar and fist fights breaking out every few minutes. It was lighthearted and relaxed.

We found a spot along the second bar in the back, and Tyler gave me a rundown on the bar scene while downing a pitcher of beer.

I had no idea how many things I didn’t know. Where do you leave your cups when you’re done? Anywhere, but preferably on the bar or in a trash can. How do you tip the bartender? At least $1 per drink, but more if it’s multiple drinks or complicated drinks. How do you stay standing when everything is blurry? Hold onto whatever stranger is closest or just dance and hope you don’t drop it too low.

I was nursing my drink but felt encouraged to throw drinks back like Tyler. It’s all for the sake of the college experience, right?

I finished my own drink and even chugged a glass of beer with Tyler, hoping the alcohol kicked in quickly. To my pleasant surprise, it did.

Once we finished our drinks, and I seared the image of Hilligan’s into my brain, we decided to head for Hideout.

Stepping out into the chilly night air admittedly sobered me up a bit. Not enough for me to walk completely straight, but a bit. We made the conveniently short walk to Hideout, and once again, I held my breath as the bouncers checked my ID.

We stepped inside, and everything was, simply put, more. The floors were stickier, the bar was more crowded, the atmosphere was livelier. It felt like a college bar.

My friend Erin joined us, and we saw some people we knew against the bar, so we chatted with them, and I drank in the secondhand drunkenness I got from my obviously twisted friends.

Tyler informed me it was my turn to belly up to the bar and get drinks. I nervously looked around, unsure where I could break into the pack.

Tyler urged me to press forward, telling me it’s OK to be aggressive. Tyler, who’s well over six feet tall, didn’t have to try and be noticed. But for five-foot-four-inch me, catching a bartender’s attention seemed impossible.

I took a deep breath and edged my way in, learning that leading with my shoulder was the way to go. I got to the bar and debated how to call over the very busy bartender without being rude.

I laughed to myself, thinking about the movie trope of flirting with the bartender. It was worth a shot, right?

I leaned forward and gave my best smile, playing with my hair. A few moments later, the bartender and I made eye contact, and I raised my eyebrows, smiling more. He smiled and made his way to my end of the bar. I blushed instantly, a little shocked by how I’d acted. But as I quickly realized, there are no rules when you’ve had enough to drink — or in this case, when you need more to drink.

It occured to me that at this point, we stopped checking prices and looking for deals. We wanted our alcohol no matter the cost.

I got our drinks, this time a double whiskey and coke for me, and we stood on the outskirts of the crowded room.

After a while of dancing, Erin and I took a seat at a hightop table to chat. I looked around and took in the clientele, realizing the people there seemed more concerned with being in large groups and being seen as opposed to Hilligan’s more intimate vibe.

Tyler finished his drink and declared it was time to tap out. We encouraged him to keep up and rally, but he became our first fallen soldier of the night.

At Reed’s suggestion, we decided to take the party in a completely different direction: Rocky’s bar. This time, I don’t feel the cold as we make our way down College Street, falling into the stereotyped image of drunk girls holding hands as they twirled their way down the street.

Whereas earlier I had been self-conscious of Reed photographing me, uncomfortable with the camera pointed in my direction as I chugged a beer, I didn’t even feel the camera as it captured me parading down the street.

We stumbled our way into Rocky’s, and I was immediately struck by how incredibly different this bar was from the other two. The walls are covered in graffiti, which seemed to glow in the dim lighting. The floor was less sticky, and the clientele was less preppy.

We got to the bar and managed to snag free drinks — one of the top victories of the night (probably right up there with making it home safely). Erin and I find ourselves sitting at the bar next to two guys playing video games on a TV mounted on the wall.

I don’t know how to play video games while sober, but while drunk I decided I was up to the challenge. When offered the controller, I took a long drink and accepted. To my surprise, my random button pushing proved successful, and I won the first match, followed by a second.

At this point, my confidence was sufficiently boosted, and I bet one of the guys drinks that I could beat him. Thankfully, I did not let myself down.

I soon went to the bathroom and became mesmerized with the colorful graffiti all over the walls. I rushed back out and was informed that if I was nice to the bartender, he might give me a marker so I too could leave my mark. Sure enough, I secured a marker and dragged Erin into the bathroom so I could ponder how to immortalize my night.

First I was playing video games, now I was getting to draw on the wall of a public building? I was loving every second of it.

During this trip to the bathroom, in between me steadying myself on the wall and struggling to spell words, I managed to achieve yet another Hollywood cliché. As a girl came out of a stall, we had a quick life talk, complete with hyping her up and talking about how much we love women.

We stumbled out of the bathroom and realized it was getting close to closing time. I couldn’t believe it: Did I really just spend a whole night at the bars?

As Erin and I twirled ourselves through the streets to get home, the journalist in me tried to think of the bigger picture. What did I learn here? What’s the main message?

But as I giggled and danced in the streets, the only message I needed was this: It’s pretty great to be 21.