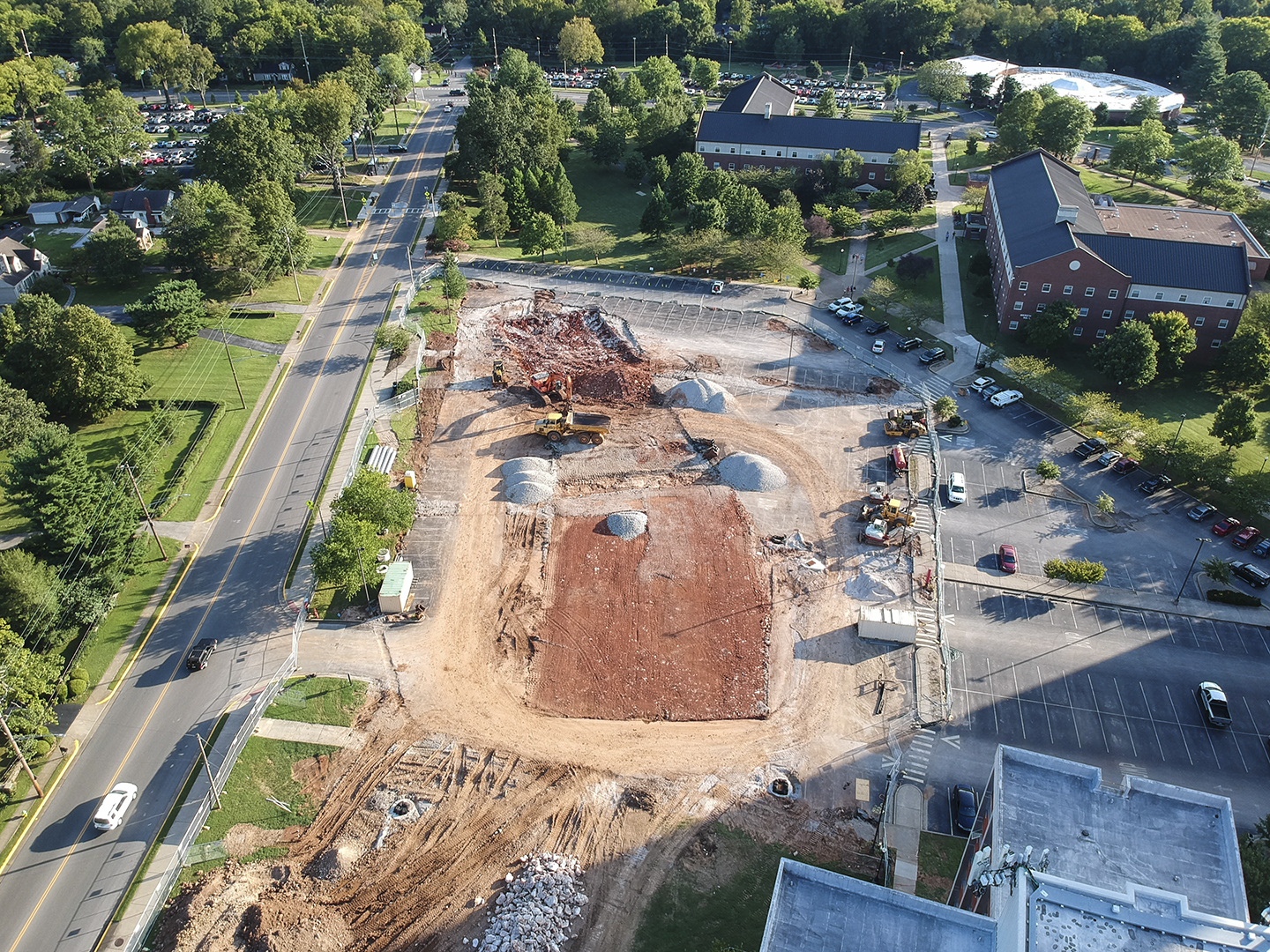 Construction equipment on the site of construction for what will be the First Year Village by Bemis Lawrence hall on Saturday, Aug. 24, 2019.

WKU’s under-construction First Year Village will include new Living Learning Communities in an effort to create student relationships. However, the dorms will also include communal bathrooms, as opposed to private bathrooms that are shared between 1-4 students, seen in high-end dorms at other schools, including the University of Kentucky.

Construction of the First Year Village has been a constant for those living at the bottom of the Hill since June 2019 and will continue to be until August 2021, according to the timeline detailed on Housing and Residence Life’s “Future of Housing” page.

“We are hoping it is going to increase our ability to recruit first year students and to retain students that we currently have,” Reagle said. “We know that students who have a good experience during their first year are much more likely to come back for their second year.”

Reagle said the freshman village is designed around living learning spaces, which are communities where HRL plans to incorporate faculty members and academic programs.

“It will engage students outside of the classroom within their particular hall,” Reagle said. “That’s the interest behind it — to create those learning communities.”

Reagle said the buildings in the First Year Village will be organized by coed “pods” of 25 students, with each pod designed to be self-contained and help students get to know each other in a smaller group.

“What we’re trying to do is to try to bring the density of students down to 25, which is kind of like a classroom size,” Reagle said. “The 25 students in each of those pods would have a much better chance of getting to know one another and be able to develop a relationship with a faculty member or a couple of faculty members from specific academic programs.”

Plans for Building One include 12 student rooms, an RA room, a common space and four bathrooms, two of which will be gender-neutral, the other two will be male and female. Reagle said there will be approximately three toilets and three showers in each of those male and female bathrooms.

Reagle said the factors that went into the decision to make the bathrooms within the pods communal were the cost, the goals of the project and the industry standards of what other institutions around the country were building.

Reagle said that when factoring in the cost of individual bathrooms and the fixtures and extra plumbing necessary for those rooms, it took the price of the project beyond what the university could afford.

Another issue with individual bathrooms was the tendency for students not to go out into the common areas when those bathrooms were within their rooms, Reagle said.

“We want students to get to know each other, and we want to add as many new beds as we can,” Reagle said.

Brian Kuster, Vice President for Enrollment and Student Experience, stated in a previous Herald interview in Summer 2019 that the project had evolved over time from when it was first envisioned.

News reporter Abbey Nutter can be reached at 270-745-6011 and [email protected] Follow her on Twitter at @abbeynutter. Lily Burris contributed to reporting on this story.