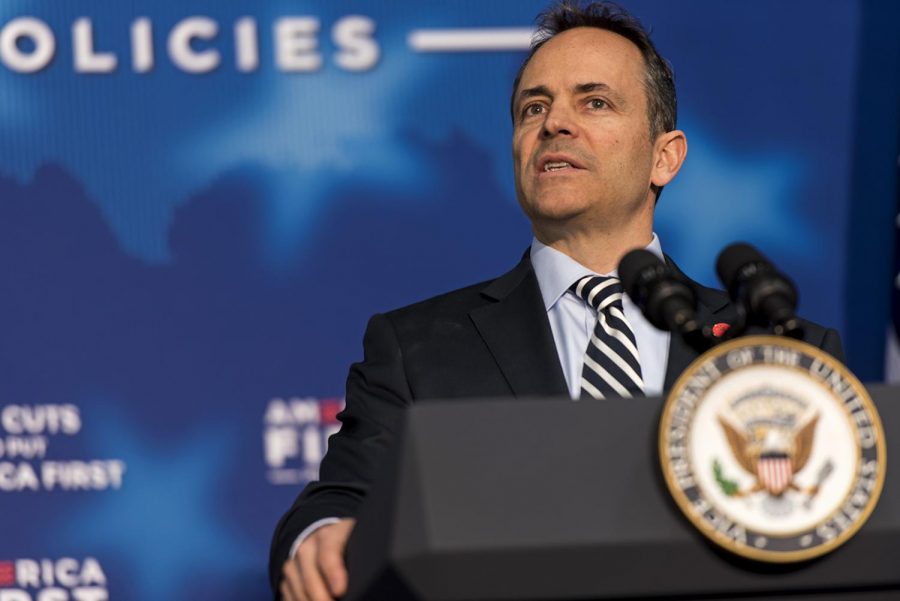 Gov. Matt Bevin introduces Vice President Mike Pence. "He was a man that was supportive of me because we shared certain core values," Bevin said about Pence, "Things that we believe the principles of America were founded upon."

With less than four weeks to go until Kentucky’s gubernatorial election, Gov. Matt Bevin addressed issues specific to WKU at the Bowling Green Rotary Club on Wednesday, including the university’s budget concerns and his message to student voters.

Bevin on the budget: WKU must prioritize its expenses

Bevin noted WKU’s budget issues and said that it is a “microcosm” of what the rest of the state is dealing with. He said he thinks the solution is deciding what the university must fund.

“That’s what happens when you only have so much money, and if there’s not enough money to pay for the things you want, you have to decide what you’re going to do without,” Bevin said.

He said WKU is going to have to prioritize its operations in order to give students the best return on investment. He noted that this would force the university to cut some of its offerings

“I’ve talked to them about this,” Bevin said. “To Dr. Caboni and others, I’ve said ‘listen, prioritize, find where you truly must invest in order to give the best return on investment to students for their tuition dollars.’ And other things have to play second fiddle, not because we wish they couldn’t all be on the front, but there just isn’t enough money for them.”

Bevin said his message to student voters is to be informed and know what they find important before they go to the polls and to vote on those values rather than their party.

“Be engaged, do your homework, understand what are your values,” Bevin said. “You know, every student, and every adult, people of any age, all have values that motivate them. And the values that a person uses to inform their vote should transcend their party.

Above all else, Bevin wants people to get out and vote, he said.

“I would sooner you go to the ballot box and vote against me, and everything I believe in, than not vote,” he said.