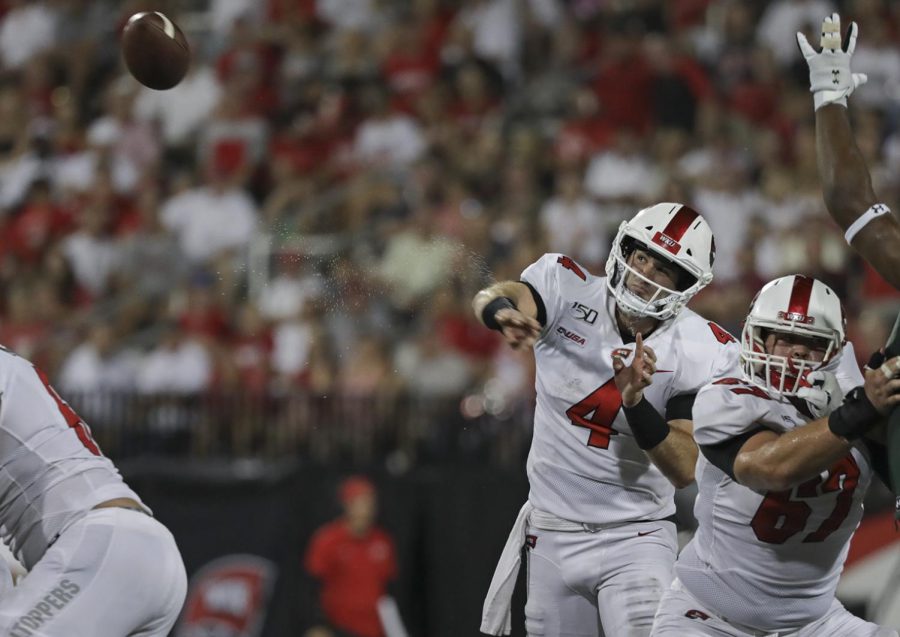 The WKU football team (3-2, 3-0 C-USA) completely shut down Old Dominion (1-4, 0-1 C-USA) on Saturday night, as the Hilltoppers only allowed the Monarchs to collect 160 yards of total offense.

“Again just outstanding by the defense,” head coach Tyson Helton said in a postgame press release. “I mean I can’t say enough about it. Really was a great team win, to be quite honest with you. The offense did some really good things overall. We struggled in the first half, not necessarily moving the ball but just doing the right things. We came out in the second half and I thought offensively really answered the call. Had a long drive for over seven minutes when we needed to get it. So I was really proud of the offense and how they responded. But again, defense was outstanding, can’t say enough about them.”

ODU quarterback Stone Smartt struggled, completing only 11-of-27 passes with an interception. Running back Kesean Strong ran the ball nine times for 40 yards. Nigel Fitzgerald led ODU in receiving with 29 yards on just one catch.

Junior safety Harrell Blackmon picked off one pass for the Monarchs.

Pearson got the WKU offense going with a couple of catches on the Hilltoppers’ opening drive, including a 21-yard reception on a third-and-10 play. The drive came to an end shortly after following two straight incomplete passes intended for Quin Jernighan.

WKU punter John Haggerty sent the ball sailing, and ODU got started at its own 12-yard line.

Washington got the Monarchs moving on offense with his legs, picking up solid gains on his first couple of rushes. The Monarchs’ ground attack continued to impress, getting the offense into WKU territory.

Malone ended any hope of a scoring drive for the ODU offense with a tackle for loss on third down. ODU punted and WKU then took over at its own 11 yard-line.

The next possession didn’t go well for the Hilltoppers — Storey threw an interception to Blackmon, who returned it to the WKU 14 yard-line.

ODU was looking poised to put up the first points of the game after Washington ran it in from 15 yards out, but a holding call moved the ball back to the 25-yard line.

Malone came up with another huge play, knocking the ball out of Smartt’s hands. The ball appeared to have popped out before Smartt was down, allowing Jaylon George to run the ball in for a scoop-and-score touchdown.

After further review, the play was overturned and ODU maintained possession. Malone was credited with a sack for a loss of 11 yards.

After being knocked out of field goal range on Malone’s sack, ODU punted and WKU took over at its own 7 yard-line.

The WKU drive would end as fast as it began — Walker fumbled and linebacker Lawerence Garner recovered for the Monarchs.

ODU took over at the WKU 12 yard-line, but the Monarchs could not cash in and faced a fourth-and-5 play at the end of the first quarter.

The Monarchs drew first blood, opening the second quarter with a 24-yard field goal from Nick Rice. ODU then led 3-0 with 14:56 left in the second frame.

Pearson got the WKU offense back on track with a chain-moving catch to begin the drive. Walker rebounded with a 8-yard run on a second-and-6 play and the Hilltoppers were in business.

Jernighan caught the longest pass of the game to that point with a 29-yard reception that kept WKU driving. Freshman Tyler Smith later got in on the action with a 10-yard catch.

The WKU stalled out shortly after, and Cory Munson was called upon to convert a 31-yard field goal. The kick was good, and the Hilltoppers evened the score at 3-3 with 9:42 left in the half.

The WKU defense came up huge with another turnover on the next ODU possession.

Darden picked off Stone after his pass deflected off the intended ODU receiver, and the Hilltoppers then took over at the Monarchs’ 32-yard line with another chance to score.

An ODU personal foul moved the ball up to the Monarchs’ 13-yard line and WKU was in the red zone once again. Jacquez Sloan picked up a first down to get WKU inside the 5 yard-line.

Walker would then punch the ball in from one yard out to score the first touchdown of the game for either squad. WKU took a 10-3 lead with 4:50 left before the halftime break.

The ensuing ODU possession went nowhere, as the Hilltoppers forced a quick three-and-out. WKU would take over on its own 28-yard line after a 41-yard punt from ODU.

Sloan came up big again, with an 18-yard reception to midfield. The Monarchs collected both a roughing the passer penalty and an offside penalty on the next play, moving the ball up to the ODU 35-yard line. Walker kept the ball moving with a 10-yard run for another WKU first down.

After Storey fumbled in the process of taking a costly 14-yard sack, the Hilltoppers were essentially knocked out of field goal range. Munson came on to try a kick anyway, but the freshman missed a 51-yard attempt with 0:14 left to play in the half.

ODU ran just one play for no gain, and the Hilltoppers took their 10-3 lead into halftime.

The WKU offense struggled, only managing 135 total yards and turning the ball over twice.

Storey completed 13-of-19 passes for 103 yards and an interception. Pearson caught five passes for 32 yards. Jernighan made his only catch count, going for 29 yards. Walker ran for 36 yards on 11 carries with a touchdown rush and a fumble lost.

The WKU defense was stellar yet again, allowing only 59 total yards and four first downs.

Malone had a sack and two tackles for loss. Darden picked off the only pass of the half for WKU.

Smartt struggled, completing only 2-of-6 passes for 28 yards. Washington led ODU in both receiving and rushing, with 14 and 16 yards, respectively.

Garner led ODU in tackles with seven, along with a forced fumble and tackle for loss.

The Monarchs got the ball to start the second half, opening play at their own 25-yard line. Smartt got the ODU drive going with a 16-yard pass completion to Strong, but the Monarchs were eventually forced to punt and WKU took over at its own 24-yard line.

Walker opened WKU’s first possession of the second half with 15 yards on a couple of carries to move the sticks for the Hilltoppers early on.

Storey completed his first two passes of the half to Kyle Fourtenbary and Pearson to get WKU well into ODU territory. Walker then ripped off a 25-yard rush to get WKU inside the ODU 10-yard line. WKU could not score from the 8-yard line, and had to settle for a field goal.

Munson came on and knocked in a 20-yard field goal attempt to extend the WKU lead to 13-3 with 10:07 left to play in the third quarter.

Smartt started the drive strong with a 29-yard pass completion to Fitzgerald to get the Monarchs in WKU territory. A pass interference call on WKU defensive back Dionté Ruffin gave ODU another first down at the WKU 35-yard line.

Washington later converted a fourth-and-1 play at the WKU 26-yard line to extend the drive for the Monarchs once again. However, a personal foul call on junior tight end Marcus Joyner moved the ball back to the 40-yard line.

After failing to convert a third-and-23 play at the WKU 38-yard line, Rice came up short on a 51-yard field goal attempt. WKU still led 13-3 with 5:31 left in the third quarter.

The Hilltoppers could not capitalize on the missed field goal, going three-and-out on their ensuing drive. The Monarchs took over at their own 36-yard line after a 29-yard punt.

The Hilltoppers suffered a loss on the defense side of the ball the next possession. Redshirt junior linebacker Damon Lowe was disqualified from the game after being called for targeting on a second-and-10 play at the ODU 36-yard line.

WKU’s next drive started at its own 14-yard line. Lucky Jackson converted a third-and-10 play with a key catch to keep WKU on the field. After a string of penalties from both sides, Storey kept up the offensive surge with a 15-yard rush that got the Hilltoppers another first down.

Pearson got WKU to the ODU 33-yard line with a 25-yard reception, and Walker followed up the chunk gain with a 19-yard rush that got WKU down to the ODU 14-yard line.

Freshman tight end Joshua Simon capped off the drive with a 12-yard touchdown to put WKU up by 17 after Munson’s PAT was good. The Hilltoppers led 20-3 with 7:58 left in the game.

ODU had no answer to WKU’s scoring drive, as the Monarchs turned it over in four plays after failing to convert a fourth-and-1 attempt at the ODU 34-yard line.

The Hilltoppers took over, and proceeded to milk the clock with Walker and Storey on the ground. Munson later missed a 36-yard field goal attempt wide left, and ODU would take over at its own 20 with 3:17 left to play in the game.

The Hilltoppers defense would get the Monarchs off the field on fourth down once again, and Storey took a knee to run out the rest of the clock. WKU won the game by 17 points.

Following the win, WKU will play another non-conference game against Army (3-2) next weekend.

The Hilltoppers will be back in action against the Black Knights in Houchens-Smith Stadium next Saturday.

Kickoff is set for 6 p.m. on Oct. 12. The game will be available for streaming on Watch Stadium.