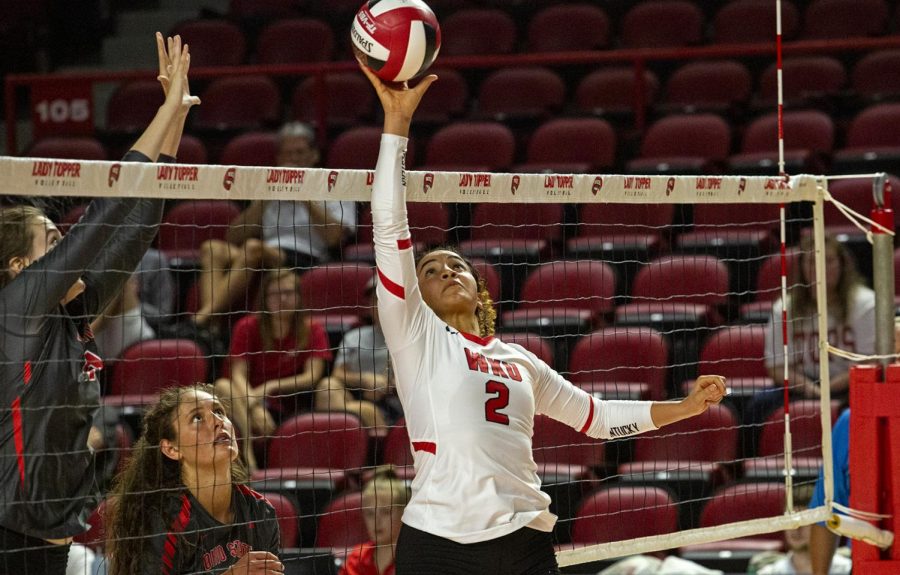 Nadia Dieudonne (2) taps the ball over the net in a win over Ohio State. WKU would later go 3-0 in the Holiday Inn University Plaza Invitational after a win against Tulane.

The WKU volleyball team (23-1, 9-0 C-USA) continued its streak of weekly honors on Monday afternoon, as the Lady Toppers maintained their No. 23 ranking in the AVCA Division I Coaches Poll and a pair of newcomers received weekly awards from Conference USA for the second week in a row.

The Lady Toppers lead the nation in winning percentage at .958, and WKU has continued to add upon the best start in program history by giving up two sets in C-USA play this season.

Stellar performances from both Dieudonne and Briggs helped the Lady Toppers keep their nation-leading statistical marks intact for another week.

Dieudonne and the Lady Topper offense connected for kills on 52.8% of the junior transfer’s sets as the team registered a season-best hitting percentage at .458.

She followed that up with a 49-assist performance in WKU’s sweep at Charlotte. Her 49 assists tied for the most across the NCAA in a three-set match this season, as WKU operated at a .315 clip on the match.

Dieudonne averaged 12.83 assists per set along with 2.00 digs per set, as WKU pushed its sets-won streak to 18.

Briggs delivered an eight-kill, seven-dig outing at UAB on Friday night, then had her 11th double-double with 15 kills and 12 digs in WKU’s second sweep of the weekend against Charlotte.

The Lady Toppers have now collected 15 C-USA awards through the first nine weeks of distribution, and they’re the only team in the league that has earned an award each week.

WKU is also the lone squad to have players recognized for each of the four C-USA weekly awards — Offensive Player, Defensive Player, Setter and Freshman of the Week.

Following another dominant weekend, WKU will return home for a one-game pit stop in Diddle Arena. The Lady Toppers will take on Texas-El Paso (10-11, 3-5 C-USA) for the only time in 2019 this weekend.

Game time on Friday is set for 6 p.m.