WKU to be tobacco-free, smoke-free campus in 2020 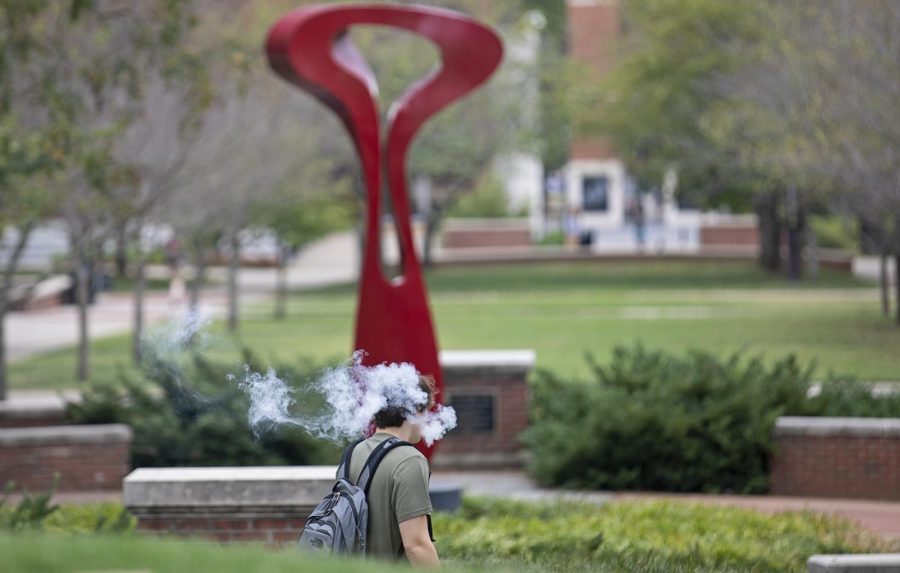 A student walks through Centennial Mall exhaling smoke from a non-THC vape pen on Monday, Sept. 23, 2019. Seven people in six states have died recently due to e-cigarette related pulmonary illnesses.

WKU will become a tobacco-free and smoke-free campus on Jan. 1, 2020. Any type of tobacco products, except for cessation products such as nicotine gum, will be banned from the main campus, as well as any property controlled by the university.

The Office of the Dean of Students sent out an email Monday morning detailing the new policy.

“At Western Kentucky University, we strive to provide a safe and healthy environment, promoting a culture of wellness for our students along with faculty, staff and all visitors,” Lynn Holland, WKU’s dean of students, said in the email. “In addition, we strive to support research, which continues to conclude that tobacco use, as well as second-hand smoke exposure is a significant health hazard and a serious safety concern.”

WKU’s university policies webpage was updated Monday with the new addition. The policy has been authorized by WKU President Timothy Caboni and the university’s cabinet.

“Research findings show that use of tobacco products in general constitutes a significant health hazard,” the website listing the policy stated. “In addition, tobacco use is a serious safety concern and has been specifically listed as a contributing factor in a number of university facility fires across the nation, many of which have resulted in fatalities or major damage.”

“As long as you’re not blowing smoke in my face or intentionally trying to bother people with it, just do what you want,” Malies said.

WKU is following in the steps of 28 Kentucky colleges and universities which have declared their campuses as tobacco and/or smoke-free.

As of Oct. 1, there are at least 2,469 U.S. college campuses that have become smoke free, according to the American Nonsmokers’ Rights Foundation.

“Respect and accountability by the University community to this policy will be primarily achieved through education, awareness and support to those who desire to stop using tobacco products,” the website stated. “With the pas- sage of time, a tobacco-free campus will become the norm.”

In response to this new policy, WKU is providing faculty and students with smoking cessation information and advice.

Located on WKU’s tobacco-free webpage, are resources for students, including websites and applications. Alongside these student-focused resources, faculty are given options for health coaching as well as information on purchasing smoking cessation products through insurance.