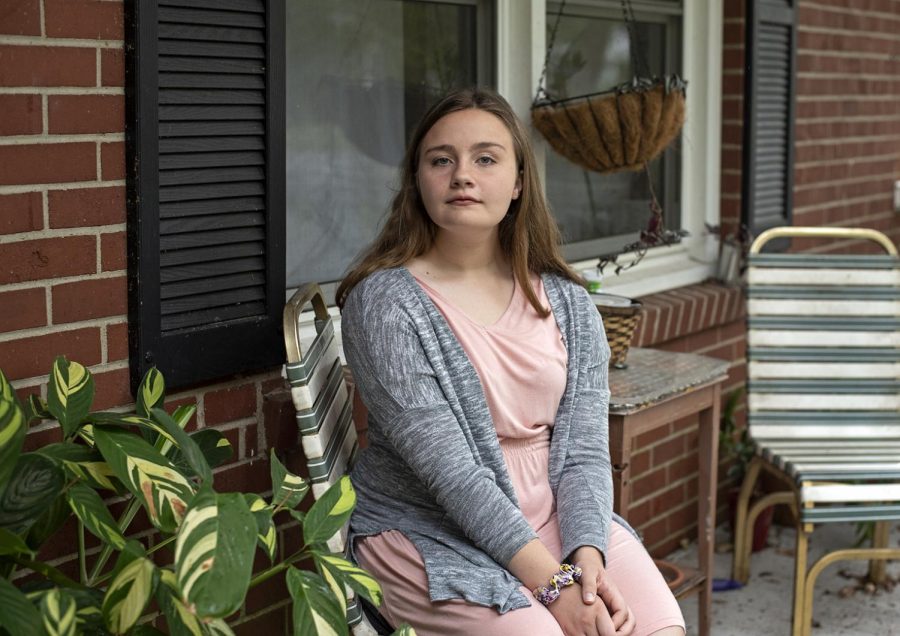 As dark clouds filled the sky, strikers gathered in Centennial Mall to stand in solidarity with other climate change activists across the world.

Rain began to pour, but a little harsh weather couldn’t scare them away, as people continued to fall into the crowd on Sept. 26, well into the afternoon. Couples crouched under signs reading funny yet poignant remarks about our changing climate such as being a “fossil fool” and having a literal “hot girl summer.”

Senior Lauren Morris, president of the Wildlife and Conservation Club, took to the microphone to tell the crowd about a person without whom the climate strike wouldn’t have happened, calling her WKU’s own version of Greta Thunberg, a Swedish 16-year-old who broke the internet last month for her pointed comments at the 2019 U.N. Climate Action Summit.

Losekamp is majoring in agriculture and minoring in nonprofit administration, Spanish and geography. If her academic life doesn’t sound hectic enough, she is involved in several clubs and organizations as well, including the SGA Sustainability Committee, Top Crops and the Citizens’ Climate Lobby, just to name a few.

Taking inspiration from Thunberg, Losekamp and her co-leader for the strike, Florence junior Jessica Williams, searched throughout the Bowling Green community to see if a climate strike would be held locally. They discovered there wasn’t one and decided to organize their own.

“Climate change is extremely important, because it is impacting our life right now and in the future,” Losekamp said. “When I was a kid, for example, I don’t remember it ever being this hot in October.”

The co-leaders split the work, with Williams focusing on student involvement and Losekamp organizing community involvement. Losekamp said she was happy and impressed with the turnout, especially because of the weather.

“Climate change is kind of something that everyone thinks about a little bit, but most people don’t really connect with it on a personal level,” Losekamp said. “And I thought one of the good things about the climate strike was it forced people to connect with it. People striking connected with it, people who walked by saw that it matters, and globally, I think 4 million people participated.”

In reality, 7.6 million people participated, according to the Global Climate Strike website. And WKU students are part of that number.

This isn’t the only way Losekamp engages with Bowling Green’s community, as several of the clubs and organizations she’s involved in deal directly with it.

One example is WKU’s food recovery program, a program of which Losekamp is particularly proud. Started in 2012, the Food Recovery Network is an organization with ties to 230 different college campuses across the U.S.

Its goal is to fight food waste by recovering and donating food which would otherwise be thrown away. Losekamp is president of WKU’s network organization, which encourages volunteers to pick up food from Einstein Bros. Bagels and DaVinci’s.

“On campus, Einstein doesn’t resell bagels the day after they’re made, because they get kind of stale, but they’re still perfectly edible,” Losekamp said. “Volunteers go and pick up all that extra food that is going to be wasted and bring it to nonprofits and churches in the community that feed people in need.”

The organization recovers food every weekday and brings it to the community, so far recovering 1,000 pounds of food in its second semester on campus.

Losekamp said she found out about the network at a sustainability conference about a year ago. When she came back to school, she spent a couple months trying to get it started and officially began operations on the first day of the 2019 Spring semester.

Elizabeth Gafford, coordinator of resource conservation in facilities management, served as the network’s adviser last year. The department hired Losekamp in December 2019, and together the two worked to bring food recovery to WKU.

“We sought guidance from other campuses who were already successfully recovering food and achieved the ServSafe Certification for Managers,” Gafford said in an email. “Elaine applied for funding, established relationships with community partners and began building a broad volunteer base for daily recoveries.”

Gafford revealed just how important food recovery is. She shared a Food Waste Hierarchy graphic published by the U.S. Environmental Protection Agency in 2015 about good, better and the best ways to eliminate food waste. Some practices in the best category were source reduction and food recovery.

Losekamp said she has many goals for her long-term future, including plans to go into environmental law with a concentration in sustainable agriculture. For the short term, she wants to expand food recovery and get more people involved.

No matter what, she said she will always continue fighting against climate change.

Morris compared Losekamp to Thunberg because she sees them both as people with powerful voices, she said.

“Elaine is the voice for everybody,” Morris said. “She stands up for people, and that’s what Greta does.”