Hilltoppers to be featured on ESPN, CBS Sports, Stadium and more this season 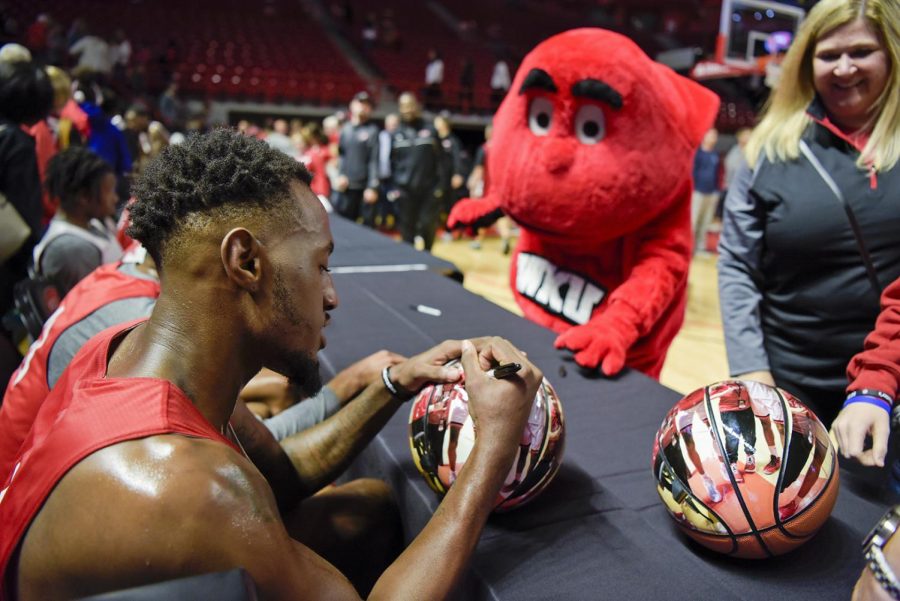 Josh Anderson(4) signs a fan made basketball after playing in scrimmage match on Thursday evening during the Hill Topper Hysteria event which offered appreciation to Hill Topper fans free autographs for all.

Fans of the WKU men’s basketball team will have multiple platforms to watch the Hilltoppers throughout the 2019-20 season, as the team’s initial broadcast schedule will feature 24 games tabbed on national or digital streaming platforms, the Conference USA office announced Monday.

While WKU’s opening exhibition game against Kentucky State will not feature a live broadcast, the Hilltoppers had 24 games selected for national broadcast or digital streaming by six different providers throughout the upcoming season.

The Hilltopper Sports Satellite Network will produce six games streaming on ESPN3. Those six games will air locally on WKU PBS in Bowling Green and regionally on WBNA in Louisville.

All six of WKU’s games aired on ESPN3 will be home games for the Hilltoppers. WKU’s first ESPN-broadcasted game will be its season opener against Tennessee Tech on Nov. 5.

Following WKU’s first regular season contest against Tennessee Tech, the Hilltoppers will also have five more live ESPN3 coverage games against Austin Peay on Nov. 9, Campbellsville on Nov. 18, an exhibition game against Kentucky Wesleyan on Dec. 17, Rice on Jan. 4 and Charlotte on Jan. 18.

WKU will also have its Jan. 2 home game against North Texas telecasted live on ESPNU, a new league partner for five games for C-USA this season.

The Hilltoppers also have a trio of broadcast games inside Diddle Arena against Arkansas on Dec. 7, Old Dominion on Jan. 16 and Louisiana Tech on Feb. 6. Those three games will air on CBS Sports Network along with WKU’s road game against Middle Tennessee State on Jan. 11.

WKU will have two games broadcasted through CBSSN on Facebook — both games are produced by CBS and will broadcast exclusively on Facebook. Those two games include the Hilltoppers’ neutral-site meeting with Louisville on Nov. 29 and their trip to Texas El-Paso on Feb. 15.

Stadium will broadcast the Hilltoppers’ home contest against Belmont on Dec. 28, as well as their road game at Alabama Birmingham on Jan. 9 and will also have six broadcasts exclusive to Facebook.

Those games six games exclusive to Facebook are scheduled for Jan. 22 at Marshall, Jan. 25 vs. Marshall, Jan. 30 at Florida Atlantic, Feb. 1 at Florida International, Feb. 8 vs. Southern Mississippi and Feb. 13 at UTEP.

Future road game broadcasts and WKU’s final four games of the regular season under C-USA Bonus Play have yet to be announced.

TV information for Bonus Play matchups will be available following the conclusion of C-USA games on Saturday, Feb. 15.

You can find a full schedule with TV broadcasts and times below.