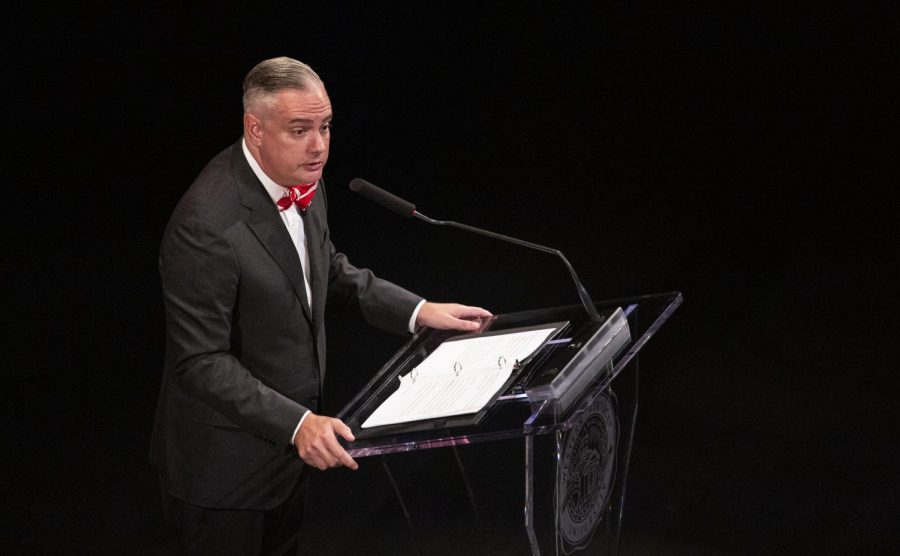 President Timothy Caboni speaks about the upcoming academic year during the 2019 faculty convocation ceremony in VanMeter Hall on Monday, Aug. 19, 2019.

Two years removed from his entry into a “tumultuous” situation, Timothy Caboni begins his third year of presidency with all eyes on him.

Caboni came into his presidency with issues already prevalent at WKU. Larry Snyder, dean of Potter College of Arts and Letters, described it as a “very difficult time” in WKU’s history.

“The waters had been choppy when he arrived on the ship, and that has nothing to do with him or his style, that’s just where we are,” Snyder said.

One of the biggest issues WKU was facing when Caboni arrived in July 2017 was balancing a budget riddled with debt. The debt service total from the 2017-18 WKU budget books indicates that WKU had to deal with $17.3 million of debt during Caboni’s first year alone.

Dean May, a social work professor, said Caboni may not have known what he was getting into when he arrived.

“He, probably once he got here, realized it was probably worse than what he may have realized or what may have been discussed when he was interviewing,” May said.

One of the ways WKU has dealt with its budget issues under Caboni is with tuition increases. During Caboni’s first year, tuition was $5,101 per semester. That has increased to $5,401 per semester. Tuition increases are a part of the way WKU is combating a large budget deficit that’s increasingly complicated due to declining enrollment and lessen- ing state appropriations.

Students provide another perspective on Caboni altogether. It would be hard to claim that students evaluate every administrative move made by WKU’s president. Some students like

Kennedy Palmer, a nursing sophomore from Memphis, Tennessee, are more interested in Caboni’s demeanor on campus than his actions taken.

“I think [Caboni’s] good spirit helps us want to be better students, because if he wants to put on a good face for the school, then so should everybody else,” Palmer said.

Julie Shadoan, paralegal studies professor and Faculty Senate chair, said the circumstances under which Caboni assumed the role of president were challenging. She described the culmination of issues as “the ball has been kicked down the road” to get into this tragic financial situation.

“I don’t know that President Caboni can be blamed for that necessarily, but I think a lot of people are resentful of the administration generally, including the board, for allowing that situation to get to the point that it got to,” Shadoan said.

All of these issues are causing problems that have hit the academic side of WKU very hard. WKU has just gone through the Comprehensive Academic Program Evaluation process, known as CAPE, which decides what programs need to grow or go. During Caboni’s first year, the University College was reorganized to put its programs in other colleges.

Corinne Murphy, dean of the College of Educational and Behavioral Sciences, said she believes Caboni realizes WKU’s faculty and staff have the “grit” to get WKU through this period that many colleges and universities are facing.

“Institutions of higher education are experiencing challenging times,” Murphy said. “They are being forced to revisit their missions; manage unprecedented changes in public, private and federal funding, and think critically about how their programs and infrastructure serve their students.”

Amid all the issues WKU was facing before Caboni became president, the past two years couldn’t be described as smooth. Kirk Atkinson, information systems professor and 2018 University Senate chair, has seen this period up close.

“He was handed a pretty tough task, but I would say at least so far he’s had his ups and downs,” Atkinson said.

Under Caboni, WKU has gone through three provosts. There have been three new deans hired. A new strategic plan has been announced. Advising has been centralized across the university. A dorm was evacuated due to mold. Instructors were given dismissal letters at the wrong time in the year. A student-favorite dean was fired and rehired. A provost resigned mid semester.

However, one of Caboni’s biggest projects outside of dealing with the budget has been focusing on increasing retention. This summer, the Summer Scholars program was implemented to give students who wouldn’t have been admitted into WKU regularly a chance to transition into college more easily to increase their odds of making it through college.

Gil Johnson, chair of WKU’s Board of Regents, pointed to the Cynthia and George Nichols Intercultural Student Engagement Center and the Burch Institute as other programs that have helped retention.

“The new dynamics in higher education require visionary thinking, strategic planning and change,” Johnson said in an email. “The president has embarked on that change, and the early indications are that he is successful.”

Caboni himself is confident in WKU.

“As we begin the academic year, I am confident that WKU will continue its institutional climb,” Caboni said in an email. “As a university community, we have completed much of the challenging work that ensures we are able to pursue the goals in our strategic plan. Our efforts already are producing positive results with increasing student retention, growing out-of-state recruitment, record fundraising totals and many other indicators of our successes.”

There are people who appreciate Caboni’s efforts. Kelly Madole, psychological sciences professor and department head, appreciated Caboni’s efforts to learn WKU when he started and acknowledged that not everything is his fault, especially the budget.

David Brinkley, director of public broadcasting, said that he believes Caboni appreciates the effort faculty and staff put forward to help students. He hopes to see continued progress from Caboni in the coming year.

“Personally, I admire his tenacity and resolve to help WKU through the many challenges we are facing,” Brinkley said in an email. “In my dealings with him through our division, he has been fair, thorough and given second chances. More importantly, I have observed that he has given additional clarity when he has seen the need for a second chance.”

Jennifer Miller, internal audit director and Staff Senate chair, said she believes in Caboni’s vision and that he has used the past two years as time to learn about WKU.

“I expect him to continue empowering our staff and faculty to make appropriate decisions for the good of the university and our students,” Miller said in an email.

Other people are skeptical of Caboni and the events that have unfolded during his presidency. Claus Ernst, math professor and faculty regent, pointed to all the changes in the upper levels of the university, including the fact that Snyder is the only remaining dean who was in his position prior to Caboni taking office.

Shadoan said she empathizes with the unpopular decisions Caboni’s had to make but said that faculty members feel like they have been asked to give the “rationalization of our existence” in the midst of everything.

“I think as far as what he’s had to do just to try and balance the budget, I understand those are very difficult decisions,” Shadoan said. “And they have had very negative impacts on both the faculty and staff at WKU.”

Atkinson described this year as “pivotal” for Caboni and pointed to recruitment efforts as an example of what needs attention.

“There’s gotta be some sort of clear cut plan that I think we all need to sort of understand what that plan is, and I don’t know that many faculty can tell you what that is,” Atkinson said.

Shadoan emphasized this point when she said she thought faculty were divided on the issue of faith in Caboni. This point is furthered by the results from the 2018-2019 Faculty Work-Life Survey, which indicates that 43.51% of the faculty at WKU believe the morale is very poor.

Despite the concerns from faculty, other students have feelings similar to those of Palmer, seeing Caboni’s positive demeanor and characteristics as the important parts of his performance.

Shelby Triplett, an economics sophomore from Louisville, said she has faith in Caboni and thinks he’s a nice guy.

“He’s very unique,” Triplett said. “He has a lot of like individualistic qualities, so he’s always well-dressed and he’s always really smiley. I feel like people really like that.”

Riley Montague, a pre-pharmacy junior from Owen County, said debt is an issue that most can’t get away from, including WKU. However, he feels that Caboni has gotten better as a president over time.

“He’s been a lot more laid back than he was before, kinda reminds me of when [former WKU President] Gary Ransdell was here, and I think that’s really neat,” Montague said. “I like how he’s really involved.”

Catherine Sheffield, a creative writing freshman from Clarksville, Tennessee, said she almost feels like Caboni is nonexistent, but she doesn’t dislike him when she does see him.