‘What a brotherhood and sisterhood is all about’: Step show sets out to highlight NPHC history 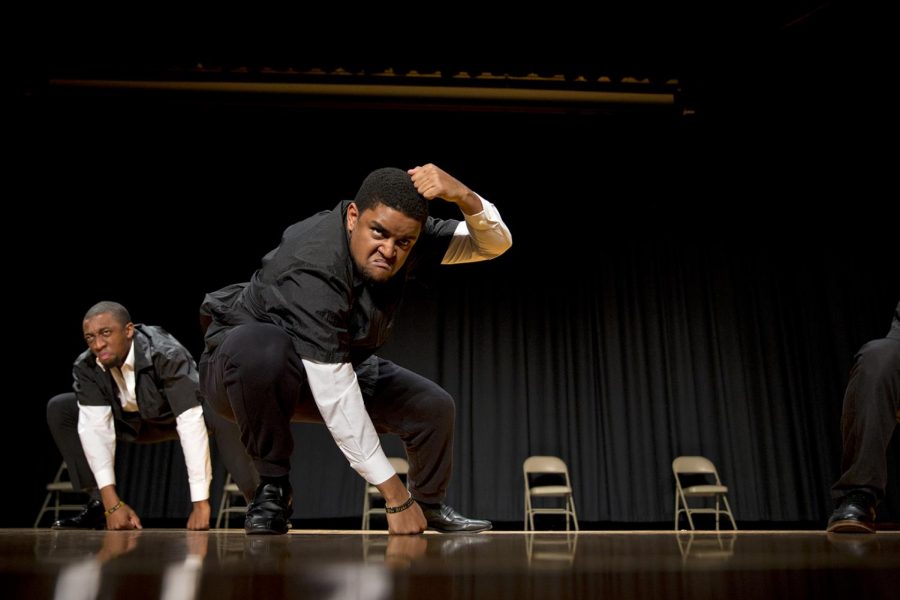 Louisville senior Harrison Hill, left and Ft. Lauderdale senior Brent O'Connor, right, perform during the 2017 Yard Show. The yearly performance is one of the many events associated with the National Pan-Hellenic Council (NPHC), the governing body of WKU’s nine historically African-American fraternities and sororities.

Kiara Holloway of AKA said yard shows have long been a tradition at WKU.

“It’s my second year doing this,” Holloway said. “I’m just a performer, and I have a fun time doing it.”

Yard shows are well known for their exciting nature, featuring choreographed performances characterized by a form of percussive dance called “stepping.” The shows are a staple of NPHC organizations, maintaining roots as far back as the beginning of the 20th century.

“It’s a very hyper energy, and I think it’s a very important part of black culture simply because it allows us to bond and get together even if we’re not in a sorority or fraternity,” sophomore Kendra Stevenson said.

“It’s fun and exciting to see the fraternities come together and just put on something for the community,” Burrus said. “It shows what a brotherhood and sisterhood is all about for all the freshmen who want to see it.”

As the lights in the DSU auditorium dimmed and the crowd began to settle, the two hosting organizations announced the show and introduced all chapters part of the Divine Nine, the nine historically African American sororities and fraternities. Each responded with its respective chant.

Performances served to entertain as well as call attention to each organization’s pride and overall mission. Whereas the Omega Psi Phi Fraternity brought an element of comedy to its performance, most organizations kept their stepping intense, focusing on hard-hitting movements to engage and impress.

This was particularly true with the Iota Phi Beta Fraternity, which commanded its performance with riotous chanting. Despite being one of the smaller organizations on campus, its synchronized roaring sounded like a mass of fans on game day.

Such excitement was only equaled during one of the night’s final performances — a fierce showing by Delta Sigma Theta Sorority. The Deltas moved with attitude, showcasing a unity between members inspiring enough to incite the Zeta Phi Beta Sorority to action.

During the middle of the Deltas’ stepping, the Zetas fired up their own chant, setting a tone of sisterhood the AKAs soon took advantage of when performing next.

As AKA was the first established African American sorority, featuring a history of over 110 years, the sorority made sure everyone knew it would always be an original.

With the night capped off by a powerful performance from Alpha Phi Alpha, the step show revealed an all-encompassing passion shared among the entirety of NPHC. Despite the head-to-head nature of the show, it’s apparent the Divine Nine revolves around unity.