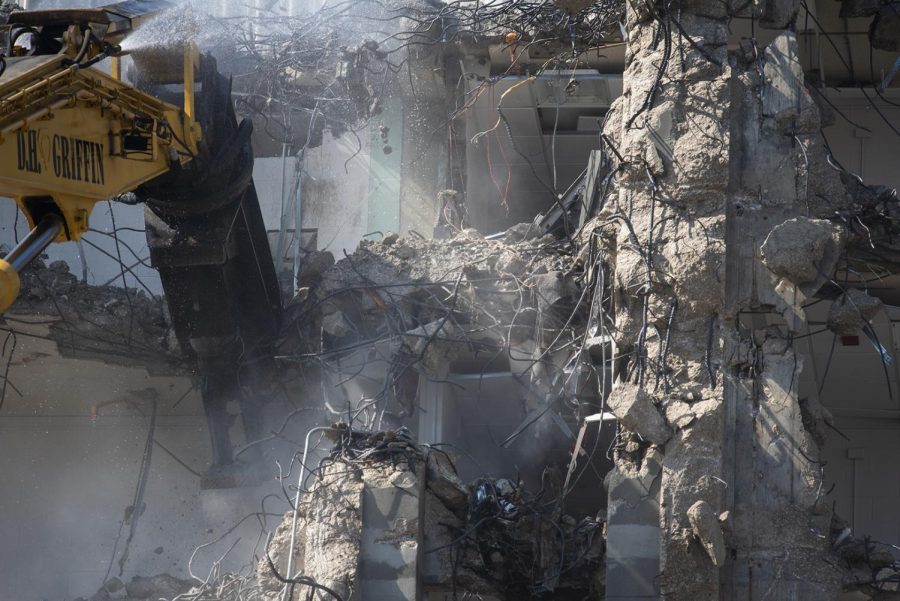 Bemis Lawrence Hall saw its last day standing on Friday, Sept. 6, 2019. The dormitory was torn down in preparation for a new "Freshman Village," a new plan for dorms at the bottom of the hill, expected to be finished in 2021.

Members of the WKU community came out Friday morning to watch the “first bite” come out of Bemis Lawrence Hall, a dorm that has been standing since 1966.

At 9 a.m. a long arm excavator hit Bemis as a part of the hydraulic clam shell demolition of the building. In other words, there was no implosion

Donald Stoneburg, owner and chief engineer of SE Engineering, the company on this project, said that the process “chews away” at the building to demolish it. He said that the contract for this is about $420,000 and that it would have been about $75,000 more to implode the building.

“We expect it to take three months to demo and be all cleared out and gone from the site,” Stoneburg said.

Noise concerns are low, and there should not be any real safety concerns for the students living in Barnes Campbell Hall due to the position of the fence, Stoneburg said.

Alicynn Delancy, special and elementary education sophomore from Mount Vernon, Indiana, lived in Bemis during her freshman year and came to the event. She described living in Bemis as being a part of a community. Even though Delancy didn’t know everybody, she said the resident assistants made it feel like home.

“It needed to come down, but it’s also sad because it was my first home on the hill,” Delancy said. “I’m just really happy they didn’t start with my half of the building.”

Delancy’s friend Andrea Toby, an advertising sophomore from Somerset, didn’t live in Bemis, but spent a lot of time in the residence hall with Delancy.

“It’s just really weird seeing the place that I spent a lot of time in, like it’s not gonna be there anymore,” Toby said. “It’s kind of sad.”

Devin Watson, a musical theatre sophomore from Lewis County, lived on the ninth floor of Bemis during his freshman year. Watson said he didn’t spend a lot of time in Bemis other than at night, but that it was “always nice to come back to and relax” after rehearsals.

Watson said he’s OK with the building coming down, although he was hoping there would be a little explosion. Watson thinks the demolition method is really cool to watch, even if it’s going to take a while to complete. Watson also said he has questions about the upcoming First Year Village that is replacing Bemis.

“I feel like we already have one valley; why do we kind of need a freshman valley?” Devin said. “Why do we need to spoil the freshman, kind of?”

The First Year Village is a new project by the Student Life Foundation that will create community style living for first-year students.

“If I’m a student looking to go to college in Kentucky with this new First Year Village and how it’s going to be tied in with the living learning communities, what a great opportunity,” Kuster said.

Kuster said the new First Year Village will help with retention and persistence.

“Housing has always been more than a place to live, and this project is an example of that,” Kuster said.