Road to recovery: WKU tasked with recovering from another FCS loss 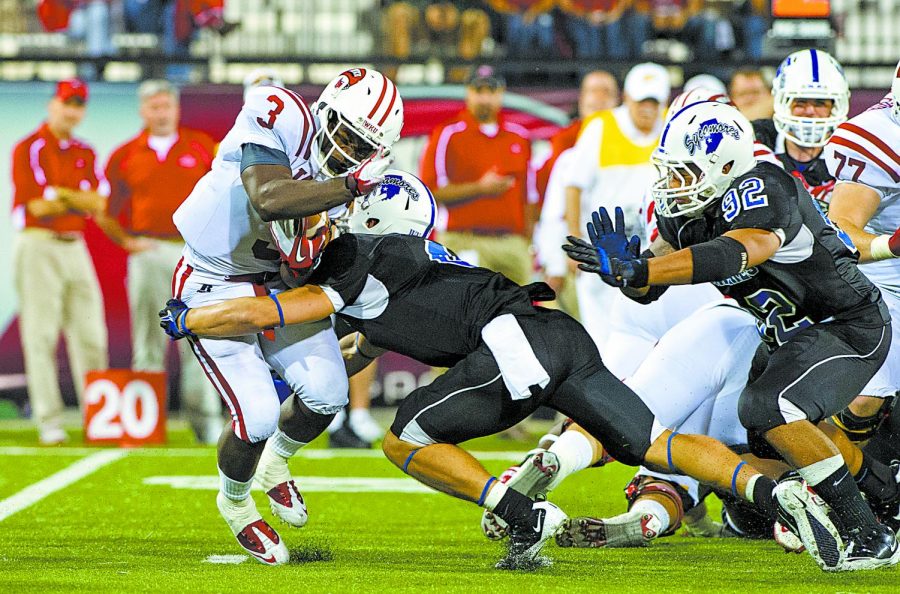 Before even reaching the line of scrimmage runningback Bobby Rainey is hit hard by ISU's defensive Alex Sewall during a run for a loss in the third quarter at Smith Stadium during WKU's 44-16 loss. (CHRISTIAN RANDOLPH/Herald)

The WKU football team repeated history last weekend, but not in a pleasant way. For the second straight season, the Hilltoppers (0-1) dropped their home opener to a Football Championship Subdivision program.

Last year, WKU blew a 21-point lead to Maine under the direction of former head coach Mike Sanford. With a new head man at the helm, Hilltopper fans hoped to keep the sting of that loss in the past.

But the beginning of the 2019 season rang in more of the same. The Hilltoppers dropped their season opener 35-28 against Central Arkansas (1-0) on Thursday, as the Bears tallied three unanswered touchdowns in the fourth quarter to vaporize a 14-point Hilltopper lead.

To make matters worse, WKU paid UCA $325,000 to come play the Hilltoppers at Houchens-Smith Stadium, according to figures reported by both The Courier-Journal and the Bowling Green Daily News in the aftermath of the contest.

These disheartening losses have become a troubling trend for the Hilltopper football program. WKU has lost to an FCS school just four times since 2009 — the program’s first year as a full-fledged member of the Football Bowl Subdivision.

But with two of those FCS losses coming back-to-back during the 2018 and 2019 seasons, Hilltopper fans have been left wondering just how far the program has fallen since winning back-to-back Conference USA championships in 2015 and 2016.

First-year head coach Tyson Helton hopes the fanbase appreciates the hardworking nature of his team regardless of the final score.

“You either win or you don’t,” Helton said postgame. “Hopefully they see a team that’s out there that’s trying to compete as hard as they can to go win a game. We may not make every play, but at the end of the day, those kids battled hard. Both sides of the ball, special teams, there was a lot of things I’m proud of with our kids tonight.

“Hopefully our fanbase sees that. I would be disappointed too as a fan if we lost. I’m not worried about FCS, Division I — a game is a game, and we’ll wake up in the morning and get ready for FIU and try to go win our first conference game.”

Helton is not the only WKU head coach forced to bounce back from an FCS loss. Three other coaches have faced the same challenge, and each turned in different results.

UCA not only gave Helton his first FCS defeat, it also took down WKU in the Hilltoppers’ first season at the FBS level. The Bears traveled to Bowling Green and routed WKU 28-7 on Sept. 19, 2009. The head coach of the Hilltoppers at the time was David Elson, who seemed optimistic in a recap vlog posted two days after the loss.

“First of all, we had a great crowd, a great game day environment, and our guys played hard,” Elson said in a video posted on the InsideWKUFootball YouTube channel. “Unfortunately didn’t come up with the W, but we are still improving and ready to get this thing going.”

WKU didn’t fare well the rest of the year. After dropping to 0-3 with the loss to UCA, the 2009 Hilltoppers lost their final nine games and finished with an 0-12 record. Although he was allowed to finish out the year, Elson found himself without a job at its conclusion — he was fired on Nov. 9, 2009, after the team’s 0-9 start.

Willie Taggart also suffered a loss to an FCS program during his three-year tenure as head coach on the Hill. The Indiana State Sycamores came to town and crushed the Hilltoppers 44-16 on Sept. 17, 2011, dropping the squad to 0-3 on the year at that point.

“I just told them we’re not going to put our head down and just call it the year,” Taggart said postgame. “We don’t work that way. That’s not the way I’m molded. We’re gonna roll our sleeves up, and we’re gonna keep working because we know we have a good football team. We gotta do things that winning football teams do.”

The 2011 Hilltoppers fared much better following the heartbreaking loss. WKU put an 0-4 start in the rearview mirror, went 7-1 in its final eight games and ultimately finished the season with a 7-5 record. Although the Hilltoppers were bowl eligible, they weren’t invited to participate in a bowl game at the conclusion of the year.

The most recent loss to an FCS opponent prior to Thursday came last season. Sanford hoped his squad would rebound after a 34-3 loss in the opener at No. 4 Wisconsin one week prior, but the Hilltoppers instead blew a 21-0 lead in the first quarter and lost 31-28 to Maine — a team WKU reportedly paid $300,000 to play — on Sept. 8, 2018.

“I fully do expect us to bounce back from this loss — I do,” Sanford said postgame. “I know nobody else out there does right now, but I feel like the WKU football program that took the field and exploded in that first five minutes like we haven’t seen probably in quite some time, I think that’s who we are. We gotta maintain that and channel that and keep the gas pedal down for four quarters.”

After dropping to 0-2 with the loss to Maine, the 2018 Hilltoppers managed only three wins the rest of the season and posted a 3-9 mark overall. Sanford was fired in November following the conclusion of the Hilltoppers’ first losing season since 2010.

The WKU football program now finds itself in a similar make-or-break situation after a critical upset defeat, but the fate of the 2019 Hilltoppers is hardly sealed.

The players could use this loss as a wakeup call to practice and perform better, which could lead to a winning season much like 2011. If the players allow the loss to linger and continue to dig themselves further into a hole, results like those turned in by WKU’s 2009 and 2018 teams won’t be far behind.

While Helton clearly has his work cut out for him, there were still positives to take away from the opener. Redshirt junior running back Gaej Walker exploded for 153 yards and two touchdowns in his first start after moving from defensive back during the offseason.

Helton said he was very pleased with his running back’s performance.

“Thought it was really good,” Helton said. “Thought he made a lot of good tough runs. He really stepped up.”

The offensive and defensive lines also stepped up in a big way for WKU. Helton said that the offensive line gave redshirt junior quarterback Steven Duncan plenty of time to make reads and throws.

“I didn’t feel like there was much of a pass rush,” Helton said. “The offensive line did a great job up front. There was plenty of time to make reads. I thought they did a nice job.”

The defensive line, led by anchors DeAngelo Malone and Juwuan Jones, was a brick wall all night. UCA only mustered 20 rushing yards on 29 carries, while Malone and Jones combined for 4.5 tackles for loss.

Helton has talent to work with heading into C-USA play this week, and he’s sure his squad will respond the right way after its difficult start.

“I think they’ll wake up tomorrow and be ready to go to work,” Helton said. “I expect nothing less out of them and I know that’s how they’ll respond.”

WKU will have its first opportunity to bounce back on Saturday at Florida International (0-1), a team that fell 42-14 at Tulane (1-0) in its season opener. Kickoff is set for 6 p.m. The game will be streamed live for ESPN+ subscribers.