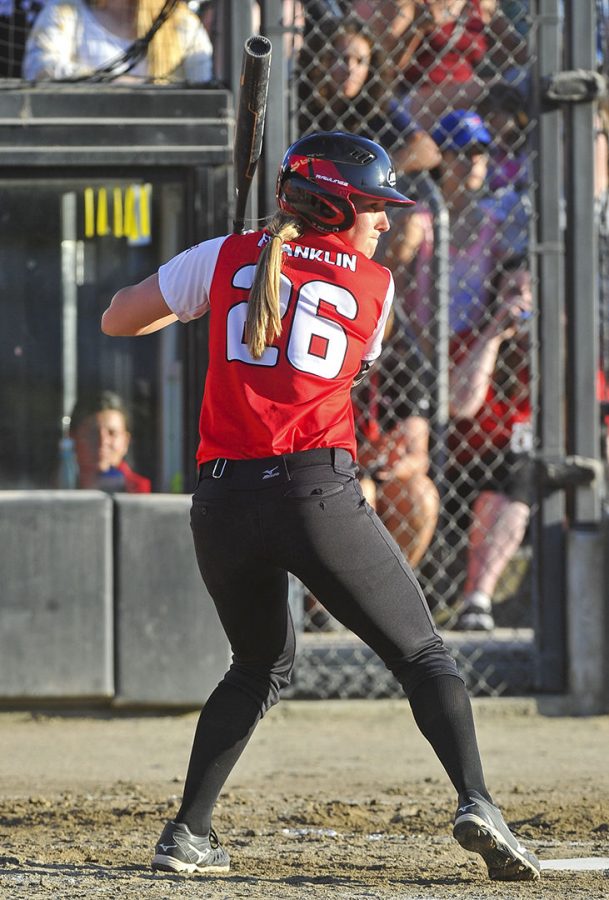 The Maple Ridge, British Columbia, native helped Team Canada become the fifth qualified team for the Olympic softball competition by scoring a run and slashing for two hits, a triple and three RBIs in just two at-bats during the team’s five-inning win.

Franklin, a 2015 WKU graduate, was on deck in the fifth inning when her teammate Kaleigh Rafter hit a walk-off home run to center field. Rafter’s mercy-rule shot ended the game early, sending Franklin and Team Canada to the pinnacle of the sport for the fifth time in history.

“I knew as soon as the ball left her bat that it was going over,” Franklin said. “After she did that, we just were able to celebrate knowing that we would be going to the Olympics.”

The 26-year-old’s road to the Olympics began in 2011, when Franklin saw her first action with the national team at the World Baseball Softball Confederation Junior Women’s World Championship. The team finished fifth in the event.

Franklin joined the senior team in 2013, assisting her country in the World Cup of Softball and the WBSC Americas Qualifier, where Canada won a silver medal.

The outfielder has done more to solidify her spot on the national team over the last six years.

“As a group, we have a pretty cool confidence,” Franklin said. “Before big games, like when we played the U.S. at the Pan [American] Games, we had a good feeling. I felt we had the same feelings before our game with Brazil, and there wasn’t much being said about the outcome. We were just focused on the present moments that would be at hand for us.”

But before Franklin could dream of donning her country’s colors in the Olympics, she was recruited to play college softball by current WKU head coach Amy Tudor, who was head coach at Indiana-Purdue University Fort Wayne from 2010-2013.

Tudor coached Franklin as a freshman in 2012 and a sophomore in 2013 before leaving IPFW for a job on the Hill. Franklin played under head coach John Bassett as a junior in 2014 before following Tudor and transferring to WKU for her senior season in 2015.

During her junior season at IPFW, Franklin led the Mastodons with a .459 batting average, a school-record 84 hits, 106 total bases, 19 stolen bases and a .515 on-base percentage. Franklin also set IPFW school records in stolen bases (71) and hits (207) in just three years.

In Franklin’s lone season at WKU, she started all 50 games in center field. Franklin smacked the softball 70 times, posted the team’s second-best single-season batting average at .417 and tallied 39 runs, 22 RBIs, 18 walks and 19 stolen bases for the Hilltoppers.

Tudor had high praise for her former player, who tied the WKU program’s longest hitting streak at 15 games in 2015 and helped the Hilltoppers pick up wins over North Carolina and No. 16 Georgia in the Athens Regional during the 2015 NCAA Division I Softball Tournament.

“This has been her dream since freshman year,” Tudor said. “She competed with her country and made time to come play with us as well. Her work ethic is unreal, and she is a real special player. She has great instincts on the field as a player and good power. Not only that, but she is a great teammate. She’s a super talented person.”

Tudor said Franklin has always dreamed big and has consistently put in the work to make her dreams come true. As long as Franklin continues to be herself and competes hard during both games and practices, she will showcase the Canadians in a very positive way at Tokyo 2020.

Franklin has been representing Canada on the field since her WKU career ended, but the 2020 Olympics will give the softball standout a chance to shine on the world stage in a way that hasn’t been possible since the 2008 Beijing Olympics — baseball and softball were last contested in 2008, but both sports were reinstated for the 2020 games.

The softball tournament at the 2020 Olympics will showcase a single round-robin competition between the six qualifiers, followed by bronze and gold medal games, which means 17 contests in total will be played from July 22, 2020, through July 28, 2020.

Canada, Japan, the United States, Mexico and Italy are the nations already set for Tokyo 2020. The sixth and final Olympic spot will be claimed by the winner of the WBSC Asia/Oceania Qualifier, which is to be held in Shanghai, China, from Sept. 24-28.

“We’re going to do what we can day-to-day to be prepared,” Franklin said. “Just making sure that we are putting 100% into what we are doing, and then everything falls into place from there.”

According to the Baseball Federation of Asia, a softball match will be held at Fukushima Azuma Baseball Stadium in Fukushima Prefecture two days before the opening ceremony, which will make softball the first official event of the 2020 Summer Olympics.

The WKU alumna will aim to play a key role during Team Canada’s quest for supremacy in 2020, especially because baseball and softball weren’t included among the shortlisted sports for the 2024 Paris Olympics, meaning Franklin may never get another shot at an Olympic medal.

Franklin said Team Canada is keeping its eyes on the immediate future it can control, which means many more months of preparation before a summer full of games and practices.