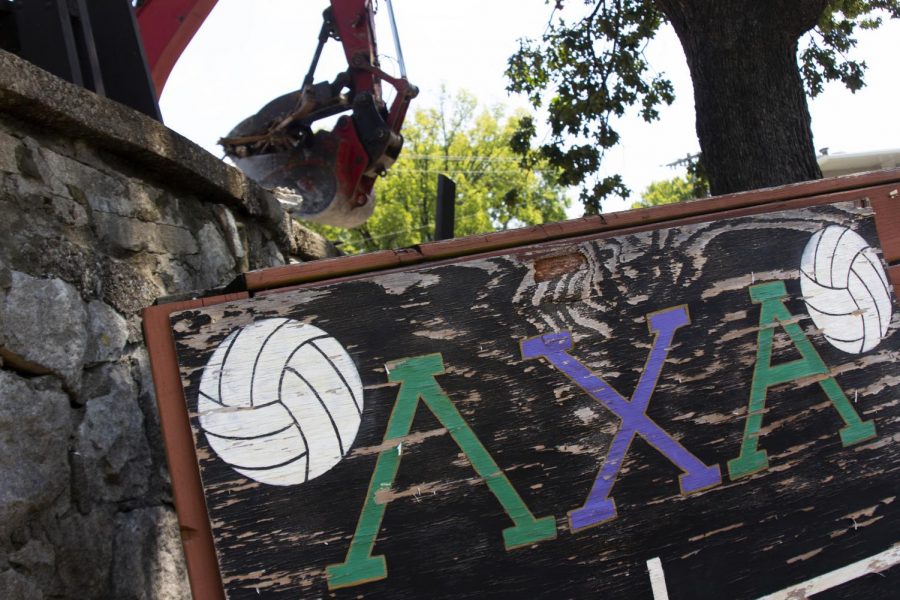 Lambda Chi Alpha’s volleyball scoreboard was among few things left in the wake of the destruction of their fraternity house on September 4, 2019.

Students who walked along Chestnut Street Wednesday morning would have noticed a pile of rubble in the place where the Lambda Chi Alpha fraternity chapter house once stood.

The members of Lambda Chi Alpha began planning the construction of a new chapter house on Chestnut Street in 2011, according to fraternity president Nathan Seged. Fundraising began in 2015, with plans to have the new chapter house built by 2020 currently underway.

The old chapter house was a familiar sight, serving the fraternity since its beginnings at WKU in 1965. First constructed on Chestnut Street in 1909, Seged said the house was in bad shape when the decision was made to tear it down and rebuild.

“Here at Lambda Chi Alpha, we’re trying to be the most competitive fraternity in every aspect,” Seged said. “We felt that the one thing holding us back was the house.”

Seged explained the house was hindering recruitment of new members due to many other fraternities having nicer houses, making competition difficult. He also said the “revampment” of the house was a project to be undertaken not just for the active members of the chapter but for alumni.

With fundraising efforts beginning in 2015 and earning nearly $1 million, the new chapter house will be valued at an estimate of nearly $1.2 million, Seged said.

Seged, a senior, recalled talk of a new chapter house dating back to his days as a freshman. This year, Seged said he’s seen a lot more excitement surrounding the new house.

“We’re the first guys in our chapter’s history to see another house, to see it get torn down, to see this pro– cess, and it’s just really cool,” Seged said.

This fall, Lambda Chi Alpha recruited out of Van Meter Hall with housing plans in hand and a demolition date set for the following week. On Chestnut Street, chapter houses are sprouting up like saplings after a storm.

Sigma Phi Epsilon’s old chapter house was demolished in 2013, and efforts to construct a new house have been underway since 2008, chapter president Clay Lilla said. The house on College Street the fraternity had been in since then was taken down Jan. 17.

“I think it’s great for the other organizations that are getting new houses,” Lilla said. “I know that having a good environment for your organization is a crucial part of being on campus these days.”

The new Sigma Phi Epsilon house is scheduled for completion in March 2020.