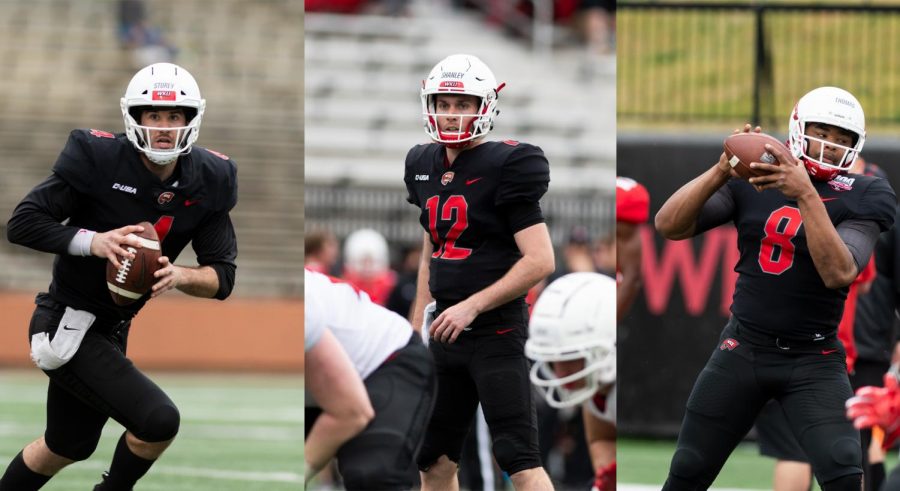 Redshirt junior quarterback Steven Duncan, the WKU football team’s starter through its first three contests, is out for the remainder of the year, head coach Tyson Helton announced on Monday morning.

Duncan had season-ending surgery to put pins in his injured left foot during the bye week, and now WKU (1-2, 1-0 C-USA) will need to find its long-term solution at quarterback.

The announcement came one week after Helton revealed Duncan had injured his foot in the third quarter of a 38-21 loss to Louisville on Sept. 14. Helton said then the injury would require surgery, but he only knew his first-stringer would be “out indefinitely” at the time.

Helton said Duncan is now looking toward his future, which will include studying film, embracing a role as an extra coach on the field and a medical redshirt that would help him recoup eligibility.

“Steven has a redshirt year still available,” Helton said on Monday. “It actually would give him two years and make him a sixth-year senior if he decided to go through that. I remember Brandon Doughty doing that, and that was extremely beneficial for Brandon Doughty with his development in the program.”

With the offense’s initial leader scratched from the depth chart for the final nine games of the 2019 season, the Hilltoppers are taking a thorough look at who will be the “next man up.”

“A lot of times there’s guys that are in practice, and they’re OK, and then all of a sudden they get in the game — the lights turn on and they’re a totally different guy,” Helton said. “I think you try to put a plan together that allows one guy to really play a lot, and you might — I’m not there yet — but you might just say, ‘Hey, let’s try to get these other guys in there too.’ Maybe they can bring something to the table.”

Offensive coordinator and quarterbacks coach Bryan Ellis said last Tuesday, Sept. 17, all three of the team’s scholarship quarterbacks would get equal reps early in the bye week, but such equality would dwindle as the competition played itself out and the coaching staff made its decision.

“We said when we named Steven it was a tight race — Ty was there,” Ellis said. “Experience is obviously a huge factor. Getting to go out there and play live-game reps and having done that is a big thing … I think we’re in a good situation. There’s a lot of teams that would be lucky to be in the situation we are when your starting quarterback goes down.”

The starting job was left vacant during the bye week, and Helton said he hasn’t yet made a decision regarding the new signal caller ahead of WKU’s game against Alabama-Birmingham.

“We’re still working through that,” Helton said. “I have an idea about how I want it to go, but I don’t think it’s going to be a one-man show.”

Helton said all three options are “similar,” because “they all can run” and “they all can throw,” which means packages won’t change much no matter which quarterback is running the show.

“You could see multiple guys out there,” Helton said. “The biggest thing for us is finding the balance, finding the rhythm — offense is flowing. So if it takes multiple guys to do that, that’s what we’ll do. If one guy has the hot hand and he’s got the rhythm, we’ll stay with that guy.”

The first signal caller to trot out as WKU’s new starting quarterback will likely be a “game-time decision,” Helton said.

But Storey — who transferred to WKU in February — is the likely choice since the former SEC starting quarterback finished as runner-up to Duncan in the initial race, which spanned from spring practice in March through fall camp in August.

“I felt it was a very close battle,” Helton said about the quarterback race on Aug. 20. “Both [Steven Duncan] and Ty Storey were pretty even, to be honest with you. Told both of those guys I’m going with my first instinct, and that was to run out Steven out there.”

Following one of the team’s practices last week, Storey said he’d be lying if he said it wasn’t tough to sit behind Duncan during WKU’s first three contests, but the veteran knew he had to stay ready, because he couldn’t predict when an opportunity to play would present itself.

“Ever since I’ve been in college, it feels like we’ve been competing,” Storey said. “It’s always a competition no matter if you’re the guy or not. Every day you’ve got to go in like it is a competition. Whatever happens, happens.”

Storey was on campus in Fayetteville, Arkansas, from 2015 until 2018. The 6-foot-2-inch, 225-pound passer finally got his shot last season, appearing in 10 games and starting nine as a junior for the Razorbacks, who finished 2018 with a 2-10 overall record.

Storey also rushed 67 times for 146 yards and a touchdown as a junior at Arkansas, which is noteworthy considering Storey’s only regular-season game action as a Hilltopper thus far came on a designed running play for no gain inside the red zone at Florida International on Sept. 7.

Outside of a single rush earlier this season, Hilltopper fans haven’t seen Storey take the field since the annual Red vs. White Spring Game on April 13.

Storey wasn’t particularly sharp in the 15th and final practice of spring ball, as the White team’s starter threw a pair of interceptions in the opening quarter before tossing a 29-yard touchdown to redshirt junior Jahcour Pearson just before halftime during a 28-21 win for his squad.

Since then, Storey has had more time to adjust to being on the Hill. Storey said last week the biggest thing he’d bring to WKU as its starter would “definitely” be “knowledge of the offense.”

Shanley and Thomas don’t possess nearly the same amount of starting experience Storey does. But Shanley did start four games and appear in nine for WKU a season ago, while Thomas played in three and maintained his redshirt status during his first year on the Hill.

“You know, having Ty and Shanley, I think that’s huge,” Ellis said last week. “And don’t count KT out — I think he’ll compete over the next two weeks.”

In just five days, a new starter will be tasked with leading the WKU offense against reigning Conference USA champion UAB (3-0, 0-0 C-USA) and its stout defensive unit.

The Hilltoppers and Blazers haven’t met since Oct. 4, 2014. On that date, UAB traveled to Bowling Green and defeated WKU 42-39 during the Hilltoppers’ first season in C-USA.

WKU and UAB also haven’t met since UAB closed down its football program during the 2015 and 2016 seasons before reinstating the Blazers prior to the 2017 football season.

WKU tallied back-to-back C-USA titles during UAB’s two-year hiatus, but the Blazers won their first conference championship and also their first bowl game in program history one year ago.

“I do think we’ve learned a lot about our football team,” Helton said. “I do think we’ve taken a lot of good steps to get better. I do think it is time for us now to take a big step and go get a big win against a really good opponent to get the momentum throughout the rest of the season.”

Kickoff for the Parent & Family Weekend game is set for 6 p.m. in Houchens-Smith Stadium. The game will be streamed live for ESPN+ subscribers.