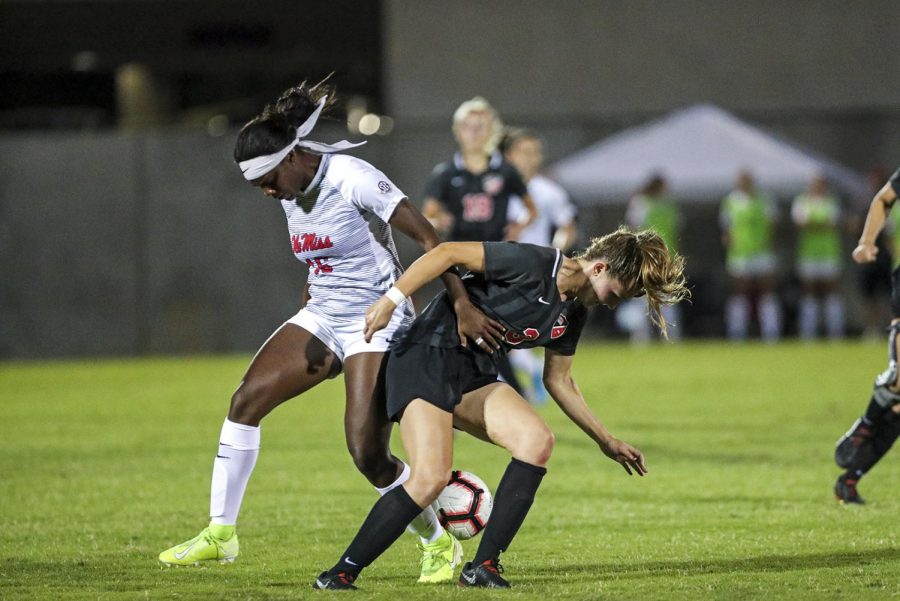 After five matches to start the 2019 regular season, the WKU soccer team has quickly grown accustomed to playing past the full 90 minutes of a game — the Lady Toppers have already played three double-overtime matches so far this season.

WKU’s (2-2-1) most recent double-overtime contest came on Thursday night at the WKU Soccer Complex against Mississippi (5-1-0). The Rebels defeated the Lady Toppers 1-0 after a foul in the box that led to junior forward Channing Foster scoring the game-winning penalty kick for Ole Miss in the 108th minute.

Just a week before WKU’s loss to Ole Miss, the Lady Toppers suffered a 3-2 loss to Samford (2-2-2) — a double-overtime decision that handed WKU its only other loss of the year. The Bulldogs overcame WKU in a match where junior defender Grace Sommi scored her first goal of the season with 34 seconds left in the decisive overtime period.

While double-overtime hasn’t exactly been kind to WKU this season, the Lady Toppers did manage to hold Kentucky (4-0-2) to a scoreless 0-0 draw on Aug. 25.

WKU’s draw against the Wildcats earned the Lady Toppers their first point against an SEC program since also drawing 0-0 against Tennessee on Sept. 15, 2013.

Although WKU has gone wire-to-wire against two SEC opponents — Kentucky and Ole Miss — already this season, head coach Jason Neidell and the Lady Toppers are not pleased with just being “close” against Power 5 counterparts.

“I think we’re at the point in our program where you look at our kids after a match like this and there’s a real sense of disappointment,” Neidell said. “There are no moral victories anymore. Unless we get wins against teams like Kentucky and Ole Miss, it doesn’t mean anything. We’re disappointed. We felt like tonight we could have at least gotten a tie. Like I said, that says a lot about our kids and their character. Close isn’t good enough, and we want to keep pushing to win these matches.”

Despite not getting wins against Kentucky, Samford and Ole Miss, redshirt senior goalkeeper Anne-Marie Ulliac said she believes these double-overtime games are only a positive for the Lady Toppers moving forward.

“This is incredible practice for us,” Ulliac said. “It’s like bonus soccer. We’re out of conference, we’re trying to play teams like Ole Miss and see what we can do against them. We’re building something great this year.”

Neidell, in his 19th season as the head coach for the Lady Toppers, thinks these early challenges will only help his 2019 team when Conference USA play rolls around.

“These four games are among the hardest stretch that we’ve put together for our kids in a long time, and to come out of that with some results, we’re feeling pretty good about ourselves still,” Neidell said. “I think these games are going to do tremendous things in the learning process, but also learning how to play with grit and learning to how to finish these games off when it comes crunch time in Conference USA.”

Before WKU’s match against Ole Miss, the Lady Toppers were off to their best four-match start since 2014. WKU’s defense has been the main contributing factor to the team’s early success — as a team, WKU has shut out three of its first five opponents and allowed only four goals total against some stout competition.

Neidell is thrilled with how his team is coming together defensively.

“We’ve been tremendous,” Neidell said about his team’s defense. “For us to take two SEC opponents wire-to-wire and not really give them a good sniff at the goal says a lot about our backline. But it’s a total team commitment. It’s not just the backline, it’s the goalkeepers, every player positionally being sound defensively and being in the right places.”

Junior defender Avery Jacobsen and senior defender Christina Bragado have been the leaders in the backline through the first five games, as they have both claimed the first two C-USA Defensive Player of the Week honors.

While WKU’s defense has been the focal point of conversation for most of the season, the Lady Toppers have had six different players get into the attack and score.

The Lady Toppers are led in scoring by freshman forward Ansley Cate and junior forward Ashley Leonard. The duo has scored two goals each through five matches.

The Lady Toppers will return to the WKU Soccer Complex for the second game of their program-record seven-match homestand on Friday evening at 6 p.m. when Southern Illinois makes its first-ever trip to Bowling Green.

WKU and the Salukis have never met before, as Southern Illinois is in its first season as a program. The Salukis are coached by Grant Williams, who began his collegiate coaching career with the Lady Toppers as a volunteer assistant from 2006-2009.

The Lady Toppers will finish its weekend of matches on Sunday afternoon when Alabama A&M travels to the Hill. Neidell said he and the Lady Toppers are looking forward to taking full advantage of their seven-game homestand.

“It’s fantastic,” Neidell said. “The fact our kids get to go to class, sleep in their own beds and play in the friendly confines of the complex for six more home games — we need to get some W’s and start taking care of this home field again.”