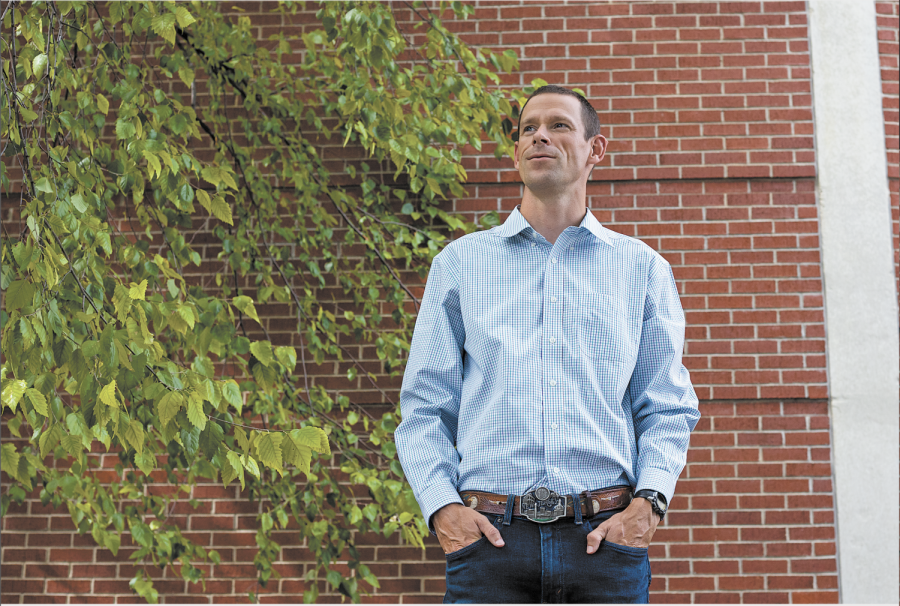 Eric Knackmuhs, a professor of recreation at WKU, cycles or hikes around Bowling Green in his free time outside of the classroom. Knackmuhs, a New Jersey native, came to WKU in order to teach after working in national parks.

A vast canyon with mountains rising in the distance provide the view for Eric Knackmuhs as he sits in his office. This is ironic for the former national parks ranger-turned-professor considering his office is in the interior of Diddle Arena and has no windows.

It is a fold-out photograph of Canyonlands National Park from a magazine. Knackmuhs first pulled it out and taped it to a small wall in a California office cubicle over a decade ago. He then worked as a customer service representative, but he longed to be out in the canyons in the picture.

Knackmuhs began volunteering at Alcatraz Island as a night tour guide while he was studying for his master’s degree at Stephen F. Austin in Texas.

“I told myself I couldn’t do it,” Knackmuhs said as he remembered his plan to quit his first day on the job.

He wanted to challenge his public-speaking skills, but his naturally quiet demeanor kept him back. He said he planned to back out when he arrived to work the first day, but he never had the opportunity. Knackmuhs said as soon as he got to work, his boss introduced herself and took him on a boat headed directly for Alcatraz Island.

“He doesn’t like to stay still,” Katie Knackmuhs, his wife and a professional counselor at WKU, said.

Knackmuhs, who is only 38, has lived and worked in many places.

Born in New Jersey, he got his bachelor’s in English in Maine. He lived in San Francisco before volunteering at Alcatraz Island, becoming a park ranger and historical interpreter while he was earning his master’s degree in resource interpretation.

He served as a park ranger at Cape Hatteras National Seashore in North Carolina and as a park guide at Death Valley National Park before moving to Blooming- ton, Indiana, where he met his wife while earning his doctorate in leisure behavior from the University of Indiana.

Since 2017, Knackmuhs has worked as an assistant professor at WKU. He and Katie married the next year in December 2018.

“I think he’s a good example that just because you get a degree doesn’t mean it’s your entire life,” Katie said.

The National Park Service celebrated 103 years on August 25. According to the service’s website, they serve over 330 million visitors annually. Such numbers rise each year, Knackmuhs said.

He acknowledged there is still a lot of growing left for the service, however. Knackmuhs said the service is working to better represent the full story of America by focusing on the stories of minority groups.

Katie said he has been an outdoorsman and history buff all of his life. He grew up with his parents taking him to national sites, and he loves a good book.

A tall and thin man, many might be surprised to know Knackmuhs is a frequent trail biker and a half Ironman triathlon trainee.

Katie said her favorite and least favorite qualities of Knackmuhs are the same: his dedication.

“When he does something, he gives it one hundred percent,” Katie said.

She added that she loves his intense commitment to everything he does, but it can be frustrating when she wants to enjoy a restful night at home. She said Knackmuhs won’t sacrifice a single night if training’s on his mind.

Knackmuhs said working full time at Alcatraz Island is probably his dream job, but he loves his job as a professor and “interacting with people and teaching.”

As he and Katie are expecting their first child in February, they’ve planned ahead — a national parks-themed nursery is a first order of business.

Features reporter Katelyn Latture can be reached at 270-745-6291 and katelyn. [email protected] Follow on her on social media at @katelynlatture.