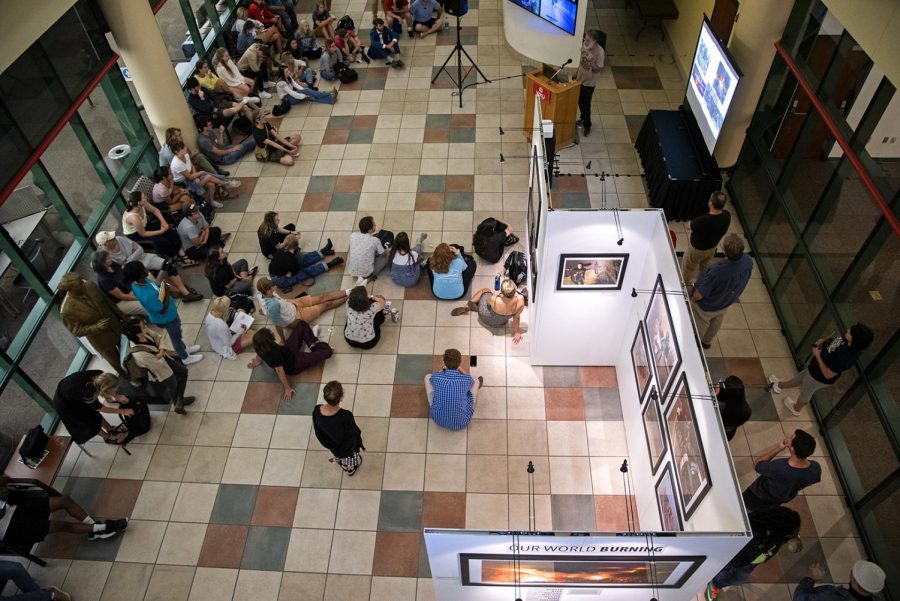 Students and faculty attend the opening of “Our World Burning,” a photo exhibition featuring a curation of work from the visual journalists who covered the California wildfires in Jody Richards Hall on Tuesday, Sept. 24, 2019.

The WKU School of Media opened a photography exhibit Tuesday night with the theme of the exhibit called “Our World Burning,” organized by WKU photojournalism student Tyler Sanders.

Sanders said “Our World Burning” was inspired by his own experiences with a forest fire in New Mexico, which consumed around 30,000 acres.

“It made me experience displacement and some of the trauma,” Sanders said. “But on the other side, too, I got to work with people to help prevent fires like this from happening.”

The exhibit features work from eight photographers who covered several forest fires in the western United States, with the exhibit mainly focusing on the Camp Fire in California. The images show burning forests, fire crews and residents of the areas who were affected by the fires.

The exhibit, Sanders said, could have been done on a historical, global or national scale. Ultimately, Sanders said the decision was made to focus on the Camp Fire due to the humanitarian impact of the fire.

“That’s why we went with Camp Fire, because it was so prominent,” Sanders said.

Tim Broekema, a photojournalism professor, outlined his hopes for his students with the exhibit.

“Photojournalism students are looking at this from the perspective of how the image was taken and the experiences the photographers went through,” Broekema said. “These fires are ravaging. They burn you, they kill you and they’re very difficult to cover.”

Broekema also said he hopes visitors to the exhibit understand the importance of forest fires.

“Our takeaway is nature versus us,” Broekema said. “And mother nature likes to do things her way.”