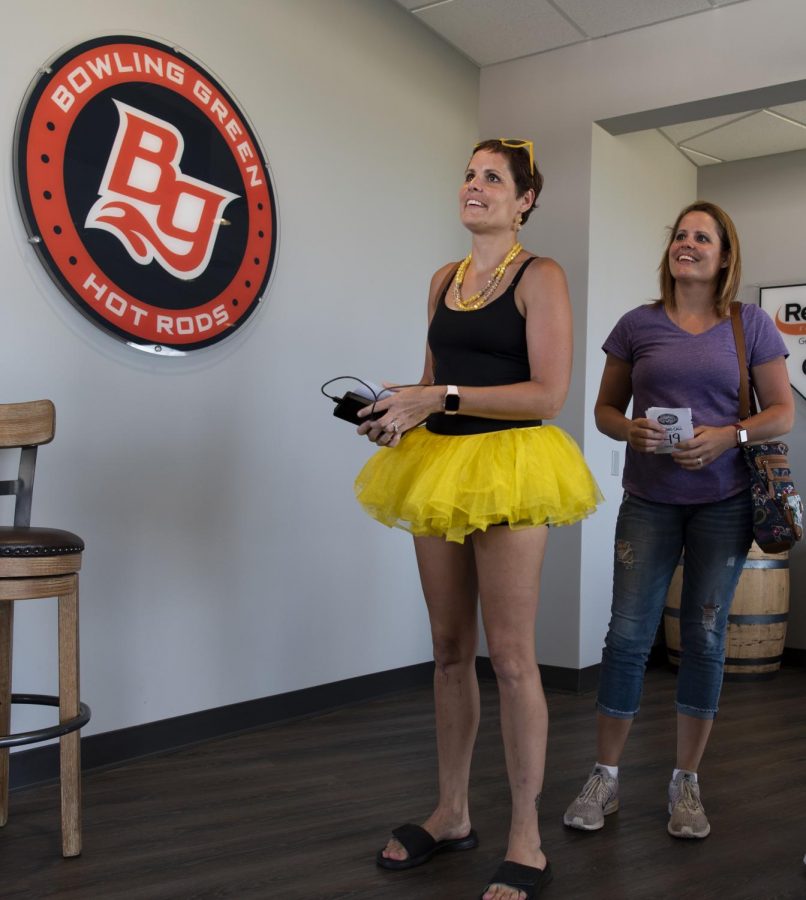 Twins, Katie Schohn and Peggy Manning anxiously await their interviews for the reality T.V. show Survivor, on Friday Sep. 20th 2019, inside Bowling Green Ballpark. The twins traveled to Bowling Green to audition for Survivor for a second time.

CBS’ mega series “Survivor” first premiered nearly 20 years ago on May 31, 2000. Now approaching its 39th season, which will debut Wednesday, Sept. 25, the show shows no signs of slowing down.

That fact alone is what inspired me to audition to “outwit, outplay, outlast” the competition for the show’s 40th iteration. Plus, it didn’t hurt that auditions were basically in my backyard, held at Bowling Green Ballpark last Thursday from 3-8 p.m.

Tack on a chance to win a $1 million prize for winning the thing — not to mention the bragging rights — and I couldn’t say no.

“Survivor” tryouts, known formally as the “Survivor Casting Call,” were hosted in Bowling Green last year for the first time since 2008, drawing a total of 556 auditioners. Of those 556, one actually made the cut — a Rockholds resident named Elaine Stott, who will be featured on the show’s upcoming season.

Atlee McHeffey, manager of digital content and promotions at television station WNKY 40, which hosted the second annual event, said Stott’s selection to the show proves anything can happen.

“After last year, we’ve proven that that’s a possibility here,” McHeffey said of Bowling Green’s status as a place where auditioners’ wildest dreams might come true.

The station hosted auditions for CBS series “Big Brother” at the ballpark earlier this year, so the venue was an obvious choice. Milam said it’s amazing to host such an event.

Fulton resident Pete Morgan, a tax assessor with the Kentucky Department of Revenue, said it’s been his dream to play the game since “day one.” He drove three hours to audition.

“We all think of this,” Morgan said of his fellow “Survivor” diehards.

At 63 years old, he believes he’s exactly what show producers are looking for — “an oddity.”

“How many 65-year-olds you see?” Morgan said, motioning to the inside and outside of a ballpark congested with tons of people much younger than himself.

Don’t let this fool you, though. Among the hundreds of people who lined outside the park, glued themselves to its seats as if ready for a Hot Rods game and prayed their audition would seal the deal, there was no shortage of businessmen, students and everything in between.

Traveling far to be a star

Twenty-seven-year-old Julia Udick hailed all the way from Fort Collins, Colorado, to test her luck. A cheap flight to Indianapolis and a three-hour drive to Bowling Green was all the convincing she needed.

Elizabeth Orr, 21, of Des Moines, Iowa, is a senior in college. She missed a class to make the audition, leaving Iowa at 5 a.m. and driving eight hours to Bowling Green.

“There’s always a million excuses to not do something,” Orr said, noting she’s been a dedicated fan of the show for 15 years. “You just got to do it.”

My shot at the spotlight

“Survivor” superfan or not, auditions are nerve-wracking. I found myself internally rehearsing answers to imaginary interview questions, envisioning how I’d respond if chosen for the show and wondering how I’d look on TV as I waited for my audition number — 262 — to be called.

The butterflies in my stomach fluttered as if trying to start a tornado. Alex Huffer, an employee at the University of Kentucky, auditioned earlier in the day. Though he said the prospect of trying out “gets the heart pounding,” he admitted the actual process wasn’t rocket science.

“I didn’t really think much of anything,” Huffer said of what crossed his mind while auditioning. “I just went in there, and I did it.”

No matter, my brain couldn’t stop moving. Despite never knowing much about the show besides its name and the tiki torches, the competitive side of me — the same one responsible for my muscular demise after working out with WKU Police Department officer Tim Gray earlier this semester — wanted to show I’d be a fearsome contestant.

Flash forward to me just moments before entering one of four isolated rooms in which the interviews took place: With no more than 90 seconds to make an impression or not, what did I really have to lose?

Turns out, not much.

Upon walking into an interview room, I was asked to stand in front of a nearby video camera — footage of the interview would be sent to show producers, who would then decide if I was worth any buzz or better left on read.

First question: “How do you survive daily life?”

Thrown for a loop, I interpreted the question a tad literally, noting I tend to avoid walking in front of the train near my apartment before heading to class.

Next question was what past contestants I liked. I said I had never watched the show, but I used this as an opportunity to play devil’s advocate: “Wouldn’t it be interesting to see how a total rookie plays the game? How long before he does something dumb?”

And just like that, it was onto my last question.

“What makes you a good choice for ‘Survivor’?”

This one was easy. Before I could even turn my head and point to the bunned mass of hair I’ve trimmed only twice since 2016, I said, “Because I’m a weirdo.”

From auditioning in an oversized tank top to smiling at the camera with thumbs-up at either side of my chin for at least two seconds until footage stopped rolling, I’m sure this wasn’t too hard to believe. Needless to say, I’d likely entertain some people.

Though I left the tryout realizing I neglected hours of homework to do something I had no business doing, I couldn’t complain. Maybe I’d get a call back, maybe I wouldn’t.

What mattered to me was waving goodbye to my comfort zone for just a while. Try surviving that.