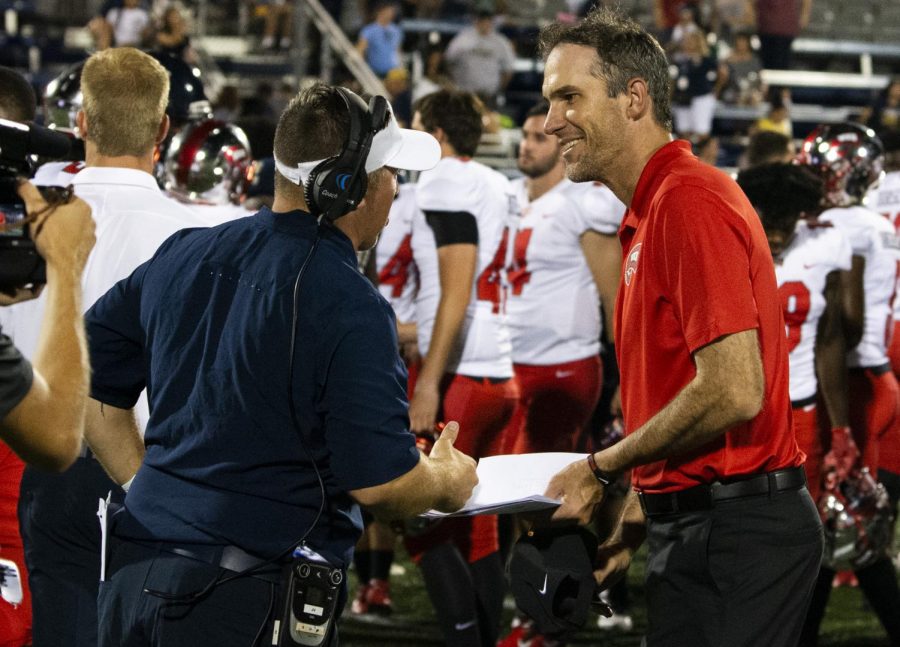 After losing the first game of the Tyson Helton era in gut-wrenching fashion to an FCS opponent the Hilltoppers should’ve hung 60 points on, WKU regrouped Saturday. The football program earned what has become a rare accomplishment over the last two seasons: a Conference USA victory.

WKU looked somewhat improved in Saturday’s 20-14 victory over Florida International. The team still has a long way to go, though, especially offensively.

On defense, Clayton White’s unit figured it out. It came through with key stops in key moments, something it was unable to do in the team’s 35-28 loss to Central Arkansas.

Here’s the thing: this is a great win for the Hilltoppers. It also comes earlier in the season than the team’s first win last year against Ball State, which came late in September after the 2018 team’s confidence was already shot.

However, FIU is not a good football team.

According to the USA Today college football re-rank released on Sept. 3, WKU was dead last in the FBS rankings at No. 130, which was probably low, considering how many truly terrible teams exist. Those rankings, though arbitrary, ranked the Panthers No. 81 overall after the team got scraped 42-14 by No. 58 Tulane in week one.

After barely getting by the Panthers, it’s clear the Hilltoppers’ future will be determined by the defense. This should come as a surprise to no one, as White’s tenure on the Hill is much further along than Helton’s, and players might be arriving at where they need to be by now.

Despite the win, it might be nearing time for Tyson Helton to consider whether Steven Duncan is really the answer at quarterback.

Without him throwing two interceptions, the team might have cruised to an easy win instead of forcing the defense to bail out what was supposed to be an improved offense.

Duncan fits the mold for a quarterback in the offense Helton said he wanted to implement. He’s got a strong arm, he’s tall enough to see receivers down the field, and he’s mobile enough to take off and gain five yards if his protection breaks down.

But Duncan’s lapses in accuracy just can’t be overlooked.

Arkansas transfer Ty Storey is the obvious next choice at the position, but he looked atrocious in the spring game. If he didn’t make significant enough improvements in his game to be “the guy,” redshirt sophomore Davis Shanley has a lower ceiling than Duncan—but also a much higher floor—due to his better accuracy.

Moving on to the Louisville game, the Hilltoppers will have a very slim chance at victory. Scott Satterfield’s squad is much different than the one coached by Bobby Petrino last season — the one the Hilltoppers lost to 20-17 after squandering a fourth-quarter lead.

The team looked much better than in the first game, but Power 5 wins don’t come easily. In order to pull off the upset, WKU will have to have its best game in the last two seasons, and the Hilltopper offense will have to resolve its issues.

Sports Columnist and News Editor Matt Stahl can be reached at 270-745-2653 and [email protected] Follow Matt on Twitter @mattstahl97.