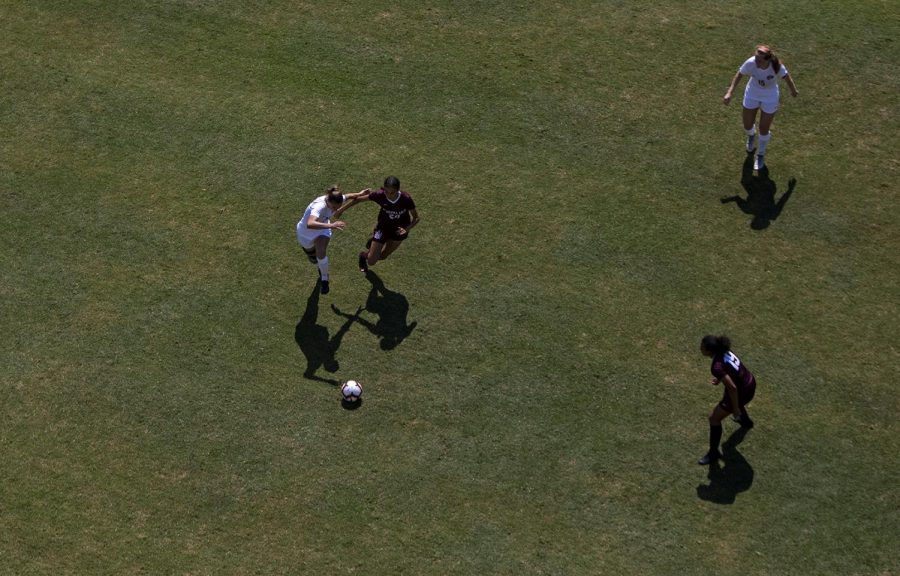 WKU redshirt junior Aleksandra Kozovic fights for control of the ball against Alabama A&M Bulldogs during their game at the WKU Soccer Complex on Sunday Sep. 15, 2019.

The WKU soccer team (4-2-1) closed out its non-conference slate over the weekend, as the Lady Toppers earned back-to-back wins for the first time this season by defeating first-year Division I program Southern Illinois 3-0 and Alabama A&M 7-1.

Head coach Jason Neidell said Sunday that his team has grown a lot mentally during its seven-game non-conference slate.

“We’ve come a long way over the course of this three or four week stretch of doing a better job with being thoughtful with what we’re doing in the game of soccer,” Neidell said. “I think that’s something as getting into critical games and conference play, not only take care of the soccer ball, not only play with relentlessness, but being able to play smart and thoughtful soccer.”

WKU welcomed SIU (4-4-1) on Friday. The Lady Toppers outshot the Salukis 29-4 without allowing a single shot on goal during SIU’s first-ever trip to the Hill.

Sophomore duo Ambere Barnett and Deven Jackson led the Lady Toppers to a win. Barnett had a goal and assist, and Jackson notched the first two goals of her career.

Jackson received her second start as a Lady Topper on Friday night, as she was sidelined for the entire 2018 season after injuring her hip in the preseason.

Jackson started at the centre-midfield spot in place of Barnett, who started at centre-forward. WKU’s pregame adjustment worked out for the Lady Toppers, as they controlled the pace of the game and had more solid chances at goal against SIU.

The Auckland, New Zealand, native said she thought the Lady Toppers came into Friday night’s match with a great game plan that led to a 3-0 shutout win.

“I think, honestly, we had the mindset to play the ball up and knock it back,” Jackson said. “I think that having our fast attackers that we have really helped us out in our attack and just over our mindset. We’re going into conference next week and we’re really trying to get our confidence up, playing like the way we want to attack as a team.”

WKU scored its most goals of the 2019 season, and the team’s seven goals were the most against a Division I opponent since the 2016 season opener against Tennessee-Martin.

Before WKU’s games against SIU and Alabama A&M, the Lady Toppers had only scored eight goals through five matches. WKU combined to score 10 goals over the weekend, bringing its total number of goals for the season to 18.

Barnett, who leads the Lady Toppers with eight points (three goals and five assists) said the team played off one another in both games, leading to many chances on goal.

“Playing off each other and getting to the seven-11’s,” Barnett said post- game on Sunday. “Trying to work together from midfield, getting it out, getting it back in.”

With non-conference play wrapped up, the Lady Toppers must now focus their attention on Conference USA play starting against Southern Mississippi on Saturday evening.

Last season, the Lady Toppers finished 10th overall in C-USA play with a 3-5-2 record and failed to reach the C-USA Tournament for the second consecutive year since only the top eight teams in the league make the postseason tournament.

WKU has only made it to the conference tournament three times since joining C-USA in 2014. Each year the Lady Toppers reached the tournament field, they were eliminated in the first round.

WKU’s most recent visit to the conference tournament came in 2016, when the Lady Toppers were upset by Charlotte in a penalty kick shootout.

The C-USA league office announced on Aug. 12 that the WKU soccer team was picked to finish 10th out of 14 teams in the 2019 preseason C-USA coaches’ poll.

Neidell said he doesn’t believe much in preseason polls because they’re based on last year’s successes and his team is totally different than a season ago.

“I think it gives us some motivation and fuel for the fire,” Neidell said about being picked 10th in the preseason. “But at the end of the day, it’s irrelevant and all that matters is where we’re at in November.”

Junior forward Ashley Leonard leads the team with four goals, all while coming off the bench. WKU has 20 assists through seven games, ranking third overall in C-USA in that category.

Barnett leads the Lady Toppers with five assists and she also leads all C-USA players in assists per game at .714.

Neidell said his team is looking forward to getting conference play start- ed this weekend.

“It’s one game at a time,” Neidell said. “So hopefully we’ll be out on our front foot against Southern Miss on Saturday and put on an entertaining game for the fans and get a W.”