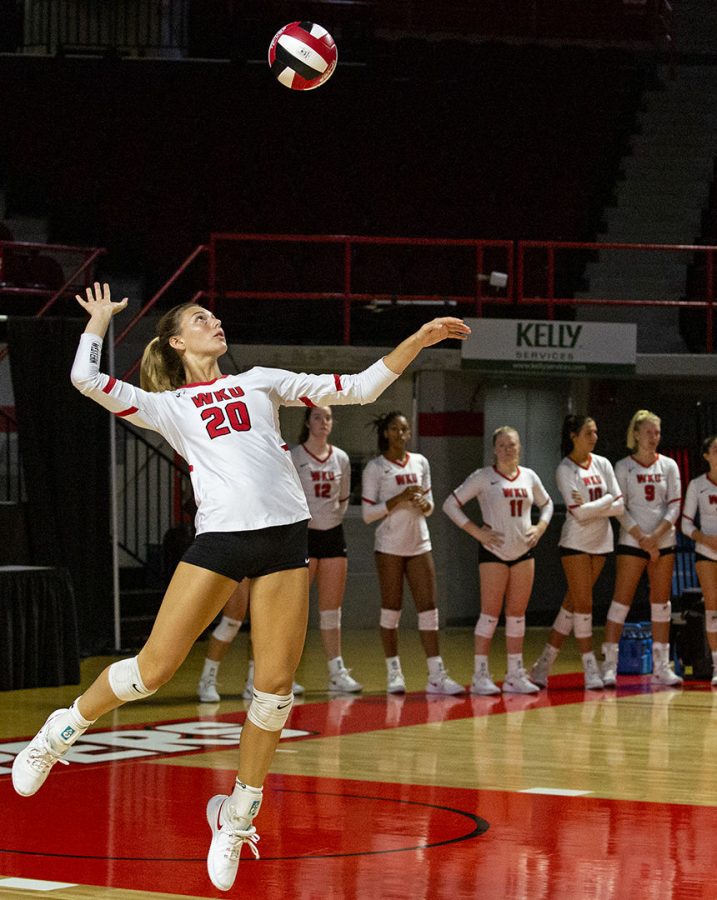 WKU's Kate Isenbarger (20) serves the ball to the opposing Ohio State team during a home game on Friday, Sept. 13, 2019.

The WKU volleyball team (14-1) defeated Austin Peay (2-12) in a clean 3-0 sweep, as the Lady Toppers claimed their final non-conference game on Tuesday night in Diddle Arena.

WKU also extended its win streak to 10 games in a row.

“I wasn’t really happy with set one,” head coach Travis Hudson said postgame. “I told our team I felt like we were scoring all the points — all of ours and most of theirs. A lot of unforced errors early on. I thought we cleaned it up a lot as the match went on and certainly played much better in the second set.”

Freshman Paige Briggs set the tone for WKU in the opening set, as the reigning Conference USA Freshman of the Week started the game 7 for 7 in total attacks for the Lady Toppers.

The first set was a back-and-forth affair, as both teams traded the lead five times. But the Lady Toppers took over towards the end of the set, scoring the last six out of eight points to win the set 25-21.

WKU came out with more fire power to start the second set. The Lady Toppers jumped to an early 6-0 lead with sophomore Lauren Matthews getting three of those points from blocks.

WKU dominated the whole set, as the Lady Toppers systematically broke down APSU and kept the pressure on the Governors.

“I think we played really clean that set,” senior Sophia Cerino said postgame. “I think that was a really good set as far as us taking care of business and taking care of our job and focusing on what need we to do without a lot of errors.”

The Governors had a better third set than the second, as ASPU was competitive early and even tied the game at 8-8.

WKU then proceeded to score the next 10 out of 11 points to extend its lead to nine points. APSU would eventually pull within single digits, but WKU ultimately won the last set 25-15 and secured a sweep for the match.

Cerino — the Division I women’s volleyball leader in both service aces and aces per set as of Sept. 23 — finished with five kills and added four more service aces during the match.

Briggs had 11 kills and 13 digs, marking her eighth double-double on the season, while sophomore Katie Isenbarger finished with seven kills, two assists and three digs for the Lady Toppers.

Following the win, WKU will start C-USA play on Sunday against Southern Mississippi (0-12).

Last year, the two teams split their two matchups, with WKU taking the regular season win and Southern Miss taking the win in the C-USA Tournament.

WKU had a 2-0 set lead against the Golden Eagles before dropping the next three sets to lose in the first round of the conference tournament in 2018. The first-round loss was WKU’s first since their inauguration into C-USA.

“I think we’re going to come out with a competitive edge against them,” Isenbarger said postgame. “It’s game one of conference play so there’s always going to be that determined mindset.”

Southern Miss’ record this season is a complete turnaround from last year when they only lost 15 games total. Out of the 38 sets the Golden Eagles have played in 2019, Southern Miss has only won two sets total — one against Seattle and one against Tulane.

Game time in Diddle Arena is set for noon on Sunday.