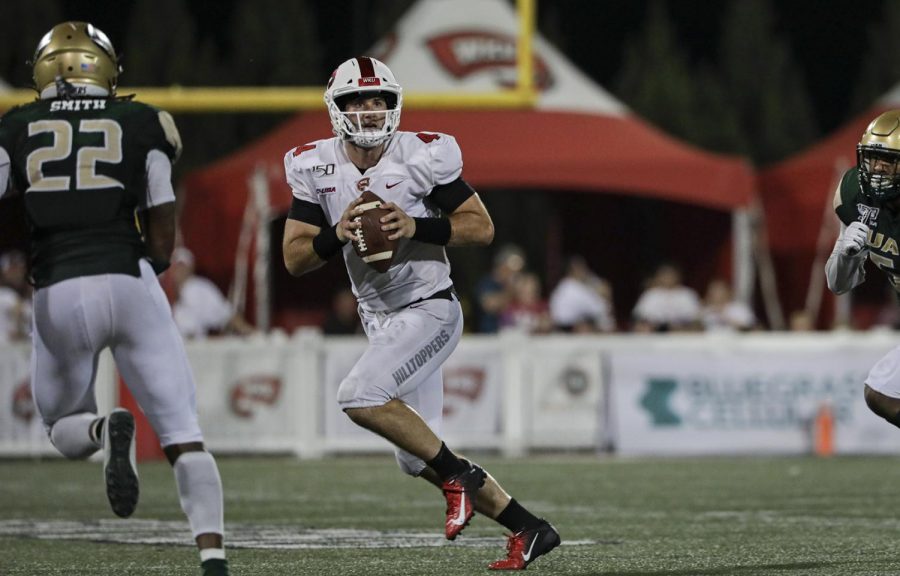 WKU quarterback Ty Storey (4) runs downfield with the ball against UAB at Houchens-Smith Stadium. Storey rushed for 26 yards during the game.

First-year head coach Tyson Helton said he thought the victory over the defending C-USA champions was a “great program win” his team really wanted and fought hard all game long to obtain.

“Just felt like our kids really wanted this one really bad,” Helton said postgame. “To be 2-0 in conference, it gives us a lot of momentum moving forward. We needed to get this one, and I’m really proud of our team. I thought they battled hard and fought hard.”

Graduate quarterback Ty Storey — a transfer from Arkansas — had a solid outing in his first start at WKU, completing 15-of-24 passes for 189 yards and two touchdowns.

Storey also led WKU in rushing with 26 net yards on 13 carries, while redshirt senior wideout Jahcour Pearson led the team in receiving with five catches for 94 yards and a touchdown.

While evaluating his play postgame, Storey said there’s still a lot of room to get better.

“Definitely some area to improve,” Storey said. “But I feel like that’s a good thing because we know if we get to work tomorrow, see the mistakes and fix them — who knows how far we can go? We just got to get back to work and continue to get better.”

Darvin called the win over UAB one of the most fun games he’s been a part of during his long tenure with the program.

“It was amazing,” Darvin said postgame. “Probably the most fun game I’ve ever played. This was just amazing. Everyone was flying around making plays. That’s what we expect coming into the season. Hopefully we can carry that on.”

Storey started the game at quarterback for the Hilltoppers, but he first play from scrimmage didn’t quite go his way — UAB defender Starling Thomas V recovered a backwards pass intended for Walker and the Blazers took over at the WKU 19 after recovering the fumble.

UAB got nothing going on its first possession, and the Blazers later settled for a 31-yard field goal from kicker Nick Vogel. The Blazers led at the 12:54 mark, 3-0.

WKU got moving on its second drive. Storey completed his first pass of the game to Pearson and moved the chains himself with a 1-yard rush.

However, the drive stalled out not long after that due to a holding penalty and a sack from UAB defender Adrienne Talan. The Hilltoppers then punted the ball back to the Blazers, who took over at their own 24.

UAB converted its first third down on its second drive. Johnston III ran for a first down on a third-and-2 play.

On the very next snap, the WKU defense came up big — Bailey picked off the first pass for the Hilltoppers this season and returned it 13 yards to the UAB 39. WKU then took deep over in UAB territory.

Walker soon converted a third-and-2 play and the WKU offense was in business. Senior receiver Lucky Jackson followed it up with a first down reception that got WKU in the red zone.

Storey put his shoulder down and ran for another first down to get within the 10-yard line. Walker had a touchdown wiped off the board by a facemask penalty and WKU was forced into a long third-and-goal play at the UAB 18. WKU gained just a yard and had to settle for a field goal.

Freshman kicker Cory Munson came on and converted a 35-yard kick, knotting the game at 3.

Johnston III got it going through the air on UAB’s next possession. Johnston III completed a pass to Myron Mitchell to get the Blazers’ offense moving again on first down.

Another completion from Johnston III to Kevin Davis got UAB a second first down before a Spencer Brown put UAB deep in WKU territory for the second time at the end of the first quarter.

Johnston III ran the ball 6 yards to the WKU 38-yard line on a third-and-7 play, bringing up a key fourth-and-1 play at the WKU 33 for the Blazers with 13:26 left in the quarter. Johnston III converted the fourth down and the UAB offense stayed on the field for another series.

Brown continued to run well on the Hilltoppers, notching another first down on a 7-yard rush. A pass interference call on Devon Key later put the ball on the WKU 5. Brown punched it in from two yards out and UAB took a 10-3 lead over the Hilltoppers with 10:21 left in the first half.

Storey got the next WKU drive going with his legs. A 15-yard facemask penalty on Storey’s first-down run put WKU in UAB territory. Another penalty committed by the Blazers, this one being a 15-yard roughing the passer call, gave WKU a first down at the UAB 20.

Pearson converted a big third-and-8 play with a 10-yard reception. The completed pass set up an 8-yard touchdown pass from Storey to freshman tight end Joshua Simon. Storey’s first touchdown as a Hilltopper tied the game 10-10 with 7:03 left to play in the second quarter.

Jonathan Haden got the UAB drive going with a pair of solid rushes. Johnston III made his second mistake of the game with another interception, this time tossing an errant pass into the hands of Darvin. WKU then took over at the UAB 27-yard line.

Jackson made a big grab to put WKU inside the red zone for its second straight possession.

After a holding penalty on second down backed up the WKU offense, the Hilltoppers had to settle for a 28-yard field goal from Munson. WKU then had its first lead of the game, 13-10.

Johnston III seemed to get back on track at the beginning of UAB’s next possession, as Kendall Parham and Watkins both caught passes for first downs. Malone got his first sack of the game, which soon led to a fourth down for UAB with just 20 seconds left in the half.

Bailey got his second pick of the game on a fourth-and-13 play at the WKU 43. The Hilltoppers took a knee with 12 seconds remaining in the half and WKU took its 13-10 lead into the break.

Storey was more than serviceable in his first half as a starter — 77 yards, one touchdown and no interceptions. Storey also led the team in rushing with 19 yards on eight attempts. Jackson led the team in receiving with 44 yards and Simon snagged the only WKU touchdown.

Johnston III struggled mightily in the first half, as the Blazers’ starter tossed three picks and just 84 yards. Brown ran for 32 yards and a touchdown.

Mitchell led UAB in receiving with 23 yards on a couple catches. Talan forced the only WKU turnover with an early fumble recovery.

Despite trailing on the scoreboard, UAB won the yardage battle 138-103. The first down battle was near even in the first half, as UAB edged WKU 10-9.

Mitchell started off the half with a first down reception for UAB. Watkins kept up the momentum with a reception of his own for a first down.

Johnston III pushed UAB deep into WKU territory with a big 19-yard rush before Brown ripped off a first down run to get UAB in the red zone.

After a false start and a tackle for a loss of four yards, UAB was forced to try a field goal at the WKU 20-yard line. Vogel knocked in the 38-yard attempt to knot the score yet again, 13-13.

WKU got nothing going on its next possession and the Hilltoppers were forced to punt after a quick three-and-out. John Haggerty punted it 48 yards, and the ball was downed at the UAB 21.

Mitchell made a huge catch on a third-and-6 play to extend the drive for the Blazers. Brown kept the drive going with a couple of solid runs. An illegal block penalty nullified a Brown catch-and-run later in the drive.

Johnston III rushed for four yards to the WKU 49 on a second-and-11 play after the flag. WKU defender Trae Meadows then picked off Johnston III for the fourth time, halting the UAB drive.

WKU couldn’t capitalize on the turnover, tallying another three-and-out drive. The Hilltoppers were then forced to punt it away, and Haggerty booted it 58 yards for a touchback.

UAB followed it up with a similar result. Johnston III couldn’t escape the grasp of Malone and faced a fourth down at the end of the third quarter. The score was still tied after the punt, 13-13.

Pearson finally got the Hilltoppers’ offense moving after an 18-yard reception on third down. Simon followed that up with a first down reception of his own.

Quin Jernighan got WKU in the red zone after his first reception of the contest. Pearson capped off the drive with a 7-yard touchdown reception from Storey. WKU then led 20-13 with 11:17 left in the game.

The WKU defense held strong on UAB’s subsequent drive and got off the field on third down. The Hilltoppers started their next possession on their own 25-yard line with 10:24 left to play.

Pearson continued his success with another catch that got the Hilltoppers all the way to the UAB 35-yard line. The drive would stall out after a holding penalty and a sack for a loss of seven yards to the UAB 37.

After a solid punt, UAB took possession at its own 5 with a chance to tie.

Watkins picked up 15 yards on the opening play of the Blazers’ next possession to get UAB to its own 20-yard line.

The Blazers kept going on offense, as Watkins would make another catch for a first down just one play later. Mitchell converted a big third down to keep the Blazers offense on the field. Later, Johnston III converted another third down with his legs.

UAB had a first-and-10 play at the WKU 38, but Darvin got in the backfield and sacked Johnston for a loss of nine yards to the WKU 47-yard line with just 2:22 left in the game. UAB took its final timeout with 2:11 remaining in the game facing a fourth-and-19 play.

Johnston III tried to buy time on UAB’s final play from scrimmage, but Malone sacked the Blazers’ signal caller for a loss of five yards to the UAB 48 and WKU took over on downs.

The Hilltoppers took over on the UAB 48 with 2:07 left in the contest. WKU ran out the rest of the clock by taking knees and took home its second C-USA game of the year by seven points.

Following the win, WKU will continue conference play against Old Dominion (1-3) next weekend.

The Hilltoppers will be back in C-USA action against the Monarchs in S.B. Ballard Stadium in Norfolk, Virginia next Saturday. Kickoff is set for 5 p.m. on Oct. 5.