‘Resident Alien’ Showrunner on the Finale’s Crazy Cliffhanger, and What’s in Store for Season 2 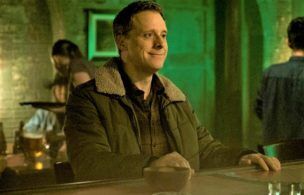 Syfy’s delightful, demented Resident Alien just wrapped its freshman season with some bonkers developments and life-changing twists for the folks of Patience, Colorado. Instead of eradicating humanity with his device, the alien inhabiting the body of Dr. Harry Vanderspeigle (the fabulous Alan Tudyk) decided to just head for the exits and fled the planet.

Unbeknownst to him until the final seconds, young Max (Judah Prehn) had stowed away on the ship while Harry’s bestie Asta (the equally awesome Sara Tomko) fought off the government goons trying to catch him. At the same time, another one of the town’s docs fell prey to a misguided alien hunter and Mayor Ben (Levi Fiehler) and his wife (Meredith Garrettson) showed two pesky agents what was up in a Mr. & Mrs. Smith-level smackdown.

See Also‘Resident Alien’ Renewed for Season 2 at Syfy
Alan Tudyk’s Harry tries to be human for a little longer.

So what’s next for Harry and our favorite small-town weirdos? Here’s the scoop, straight from showrunner Chris Sheridan.

So this show premiered, in a way, at New York Comic-Con in 2019, then it finally aired this year and audiences really embraced it.

Chris Sheridan: It’s insane. The whole process has been just incredibly long. I’m really happy for the actors who just did such an incredible job, and happy for the crew who worked so hard. And you know, a lot of them had never even had a chance to see the pilot, so with the show finally coming out, the crew finally got to see the stuff that they were laughing at all year while shooting.

Was this finale already written and in place before you got the renewal?

Oh yeah, I finished writing the finale a little over a year ago. We were up in Vancouver, we shot the pilot in October of 2018, started episode 102 in November of 2019, and we were maybe two or three weeks away from finishing the whole thing in March of 2020 when the show shut down. We were so close, we were actually in the crevasse stage shooting stuff from episode 108 and we realized that we had to shut down. I flew back when things got a little bit better in August, quarantined for a couple of weeks, and then the actors all came back and we shot for maybe five weeks to finish up between August and October.

So your cast knew all this time about how the season ended and had to sit on it.

[Laughs] I know! The original plan was always to put Max on the ship going home.

If you hadn’t been picked up…

Yeah, I know. [Laughs] That was a question someone asked me, “Wouldn’t it have made more sense to just wrap everything up just in case you don’t get picked up?” And I was like, “No, I don’t want to wrap things up.” If you can really wrap things up, [the network] can be like, “OK, this is done. Let’s move on to something else.”

I knew it worked and I made a decision early on that I was never going to hedge my bets. From a creative standpoint, I felt like I should just keep moving forward. Aside from the cliffhanger of Max being on the ship, what do you see Season 2 looking like?

Well, you know where it’s going…Harry’s going to have to come back. So it’s less of a cliffhanger and more of a joke, you know? It’s more of a “No, Harry can’t catch a break.” It’s a button on the season.

I always wanted there to be an alien story and then a town story. I felt the show would work the best if I could make the town’s story compelling enough that if the alien never even came down, there’d still be a show. That way, when Harry comes down, he has something three dimensional to observe as an alien thing, trying to figure out humanity. So the town story in Season 1 was always going to be taken from that really brilliant starting point that Peter Hogan and Steve Parkhouse came out with in the comic, which is kind of “Town doctor dies, who did it?” I always felt like the second season would be “Why?’

Season 2, we’ll look at what the original Harry Vanderspiegel involved in and who was he involved with that put him in a place where he felt like he had to kill Sam Hodges. So in Season 2, there’s a handful of people who know what Harry really is and he’s got his alien leaders expecting him to destroy mankind.

Right. There’s Max and Sahar [Gracelyn Awad Rinke]. There’s Asta and her father Dan [Gary Farmer]. The advantage of that going into Season 2 is there’s actually people Harry can talk to. So now, what does that Harry-Dan relationship look like, what is his relationship with Asta like? He has her as an ally now. She doesn’t think he’s perfect, but knows he’s an alien and maybe Asta can help run interference for him.

And his failure to pull off his mission, does that mean more aliens coming to town?

That’s a very good question. He didn’t do his mission and the nature of this show is that he probably can’t, because then what’s the show? Harry by himself on earth. That’d be that fun. [Laughs] So he’s clearly not going to kill everybody on Earth at this point, right? So yes, that is an open thread. The alien’s on his planet, at what point do they know he didn’t do it? And when they find out, what are they going to do about it?

That is a bit of a tightrope walk because I feel the balance of the show is working pretty well right now. If we get to the point where there’s spaceships coming in to Patience shooting laser beams at each other, then the guts of the show start changing drastically. So I wouldn’t expect to see that. But I would expect that the aliens on Harry’s  planet are not going to be happy. And if Harry can’t get the job done, maybe someone else will.

Oh, and you do have Dr. Stone, who has been kidnapped by McAllister.

[Laughs] Oh yeah! Linda Hamilton now has this dude, Dr. Stone, played by Michael Cassidy, who’s hysterical. Yeah, she has Dr. Ethan in a fu**ing cage somewhere, so that’s definitely something to explore as well. Do you plan on keeping them Harry and Asta and presenting a relationship between a man and a woman that is not heading towards romance?

That is the plan. I explored that early on to see what would that look like, what would that be and it didn’t feel right. And now, it feels even less right after seeing this first season, seeing those two characters on screen, My goal was to get Harry throughout the season to learn a little bit about human emotions and start feeling the things that make us up as humans. I wanted to hold love until the end of the season. He hints at it along the way, like in episode five when Jay [Kaylayla Raine] comes into the diner and Dan says, “Family don’t pay.” In the voiceover, that’s when Harry says that maybe there’s something out there stronger than hate.

So he’s starting to explore what that might be and in the season finale, he discovers it with Asta. It makes him more open to people, feel a part of everything and connected to everything. He’s learning to love her as a person. It’s a love of friendship and of connection, and I wanted to explore the nature of love in that way, through all the characters.

Like the very strange love Ben and Kate rediscover while beating the snot out of the government agents?

[Laughs] I just love that scene. I spent probably more time editing and cutting that scene and the music and the sound effects and all that stuff than anything else. It’s a slow-burn, all season building up to that moment with them. And I think that’s a good payoff. They had a problem with intimacy. And beating the living out of two people connected them in a way that nothing else has. See Also‘Resident Alien’ Star Sara Tomko on the Joys of Playing a Woman Allowed to Get Angry
Plus, learning the truth about Harry, & showrunner Chris Sheridan on Alan Tudyk’s mind-blowing range.

Because so many of these characters actually have a shared past, have you considered doing an episode set solely in their high school years?

Not an episode, but some moments like that. I do want to explore that a little bit.

Your show’s incredibly diverse without hitting us over the head with it.

That was by design. And I wanted to give as much representation to the indigenous community as I could. For decades, that community has been rendered invisible on TV. We had a great Native American writer on staff and hired a separate casting director just to cast those parts. I have a consultant named Kenny Frost who’s part of the Southern Ute tribe, which is the local tribe that we use in the show. It was amazing.

What I wanted to do is instead of making a big thing about it, “Oh, here’s the native American character,” just have a part that could be played by anybody and cast a Native American actor. Trevor Carroll is an amazing actor, he plays Darcy’s, partner John who works up in avalanche control. He happens to be Native American. He could be white, Asian, he just happens to be Native. And you don’t have to comment on it because in real life, people don’t comment on it!