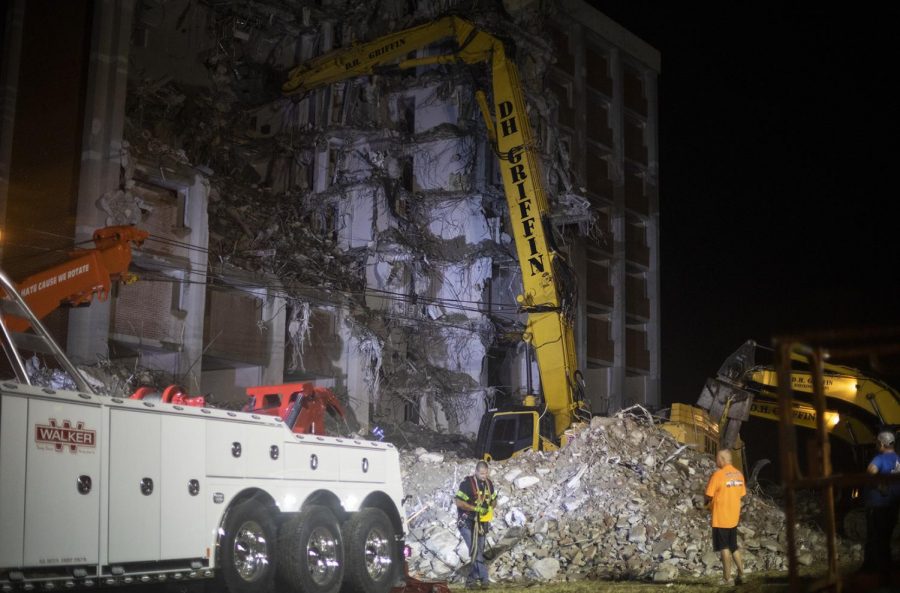 A demolition crew hired by Western Kentucky University work overtime to pull their long-armed excavator out of an unknown crawlspace at the demolition site of Bemis Hall late Friday evening, Sep. 10, 2019.

In the midst of the demolition of Bemis Lawrence Hall, the long arm excavator being used to tear down the structure partially sank into a crawl space at the foot of the building Tuesday.

Brian Kuster, vice president for enrollment and student experience and executive director of the WKU Student Life Foundation, said the excavator was inching toward the building when it suddenly tilted. The driver of the excavator stopped before the excavator could sink further.

“Some parts of buildings [have] space you can actually walk underneath, but it may not be a basement as such,” Kuster said.

Kuster said the crawl space was built into the plans for Bemis Lawrence Hall, and Barnes-Campbell Hall has a similar crawl space.

“That’s how you could get under that first floor for piping and things like that,” Kuster said. “That was a space you could walk in.”

The excavator was removed from the crawl space by a crane, and the space was then filled in. Kuster said WKU knew of the crawl space, but was unaware if the demolition crew knew of it.

“I have not had a conversation with them but they are familiar with the building,” Kuster said.

No one was injured. Kuster said the cost of lifting the excavator out of the crawl space will not come at any extra cost to the university.