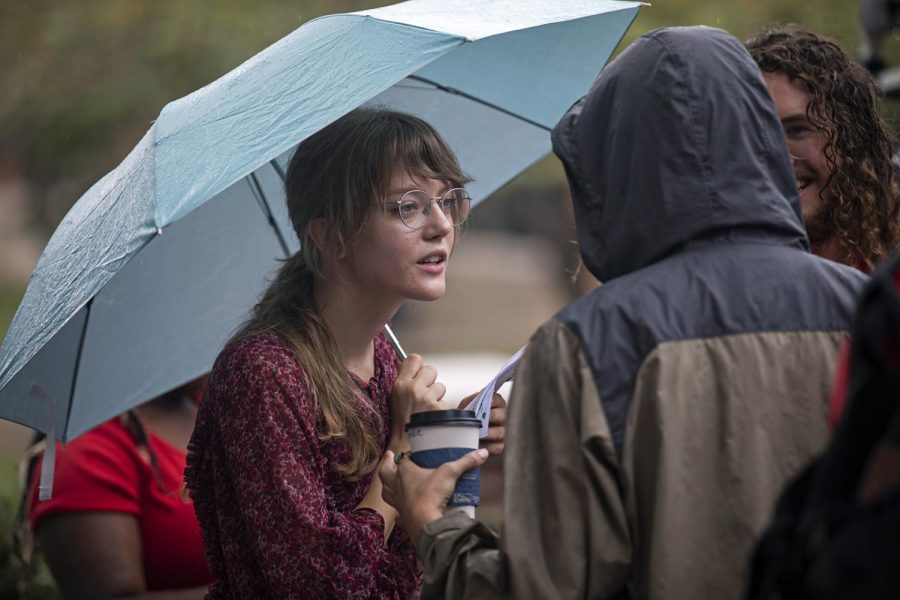 Students, dressed in red and black, gathered in Centennial Mall today to strike in solidarity with the climate-crisis movements taking place around the world.

From 11:30 a.m. to 2:30 p.m., students, faculty and community members stood together with cardboard signs in unified support of bringing awareness to climate change issues on campus and in the Bowling Green area.

The Bowling Green strike coincides with protests occurring in over 180 countries and several thousand locations in the past week. A report from the Guardian last week stated the movement is arguably the largest and furthest reaching demanding action against climate change.

It marks the first climate strike to happen on campus and is a continuation of last Friday’s Global Climate Strike, where millions of people broke away from their daily lives and walked out of school or their jobs to spread the word about climate change.

Junior Jessica Williams, of Florence, organized the climate strike to educate others on the effects of climate change.

“Climate change has a real impact on society,” Williams said to the audience. “How are we going to have a future if our world is burning?”

Her “call-to-action” was a plea for people to be active in saving the environment and not living as bystanders while the Earth slowly becomes an uninhabitable home for all living things. Some students dressed in black and delivered a eulogy for the earth, signaling that they thought things have already gone too far.

Recent demands for action against climate change can be traced in part to Greta Thunberg, a 16-year-old Swedish climate activist, who spoke in front of the United Nations Climate Action Summit in New York on Sept. 23.

“We will not let you get away with this,” Thunberg said. “Change is coming, whether you like it or not.”

Williams used the forest fires in the Amazon rainforest as an example which was a popular topic in the U.S. a little over a month ago. Many were outraged by the slowness of news outlets to cover the environmental disaster.

The series of climate strikes were initiated by the activists’ disapproval of the lack of commitment institutions and the government have about enforcing goals to reduce the emission of greenhouse gases, as well as deforestation.

Ebony Lee said she thinks the Amazon forest fires aren’t enough to get everyone to be involved in the conversation.

The Amazon fires were a point of emphasis for Williams as well.

“The whole world is suffering and we will eventually feel these effects.” Williams said.

Biology professor Albert Meier recalled his experiences of seeing the way the Earth is deteriorating and being destroyed.

A mutual desire among the many who participated in the strike is to see the government and businesses adapt their policies to be more eco friendly.

Alexa Salacer, of Franklin, Tennessee, said it was her purpose to be a part of the strike.

“Politicians, people in charge aren’t really doing anything about it,” Salacer said. “We need to bring awareness to them about the problem and how serious it is.”

In 2017, President Donald Trump announced the U.S. would withdraw from the 2015 Paris Agreement after contract obligations expire in November 2020.

The Paris Climate Agreement is a pact enacted in 2016 between more than 190 countries to decrease global warming by keeping the Earth’s temperature from rising above two degrees Celsius.

Heather Mullenax, of Paducah, said the decision upset her.

“I think it’s a terrible idea they withdrew last year,” Mullenax said. “I think the reason the UN had the Paris Climate Act is it’s supposed to help all the countries and all the nations. Us withdrawing from it, one of the largest countries in the UN. . . it’s almost like we’re not believing in science when science is the actual proof.”

America’s shortfall in fulfilling some of its climate goals resulted in the country’s prohibition from taking the stage at the Climate Action Summit on Sept. 23. Japan and Saudi Arabia were among those not given time on stage.

WKU has a growing number of student-led green organizations and are taking the steps to get younger generations more involved.

Kate Cobb, a geology major, said that she sees value in some of the things already being done.

“I do like the rule that for every tree that comes down, two tress have to be put up,” Cobb said. “Our campus versus other campuses in Kentucky have a lot more lush trees, and I think they do make an effort.”

Williams made sure to encourage students to get registered to vote, saying that politics plays a huge part in the laws and policies that are enacted in favor of combating climate change.

Reporters Michael J. Collins, Abbey Nutter and Matthew Williams can be reached at 270-745-6011.