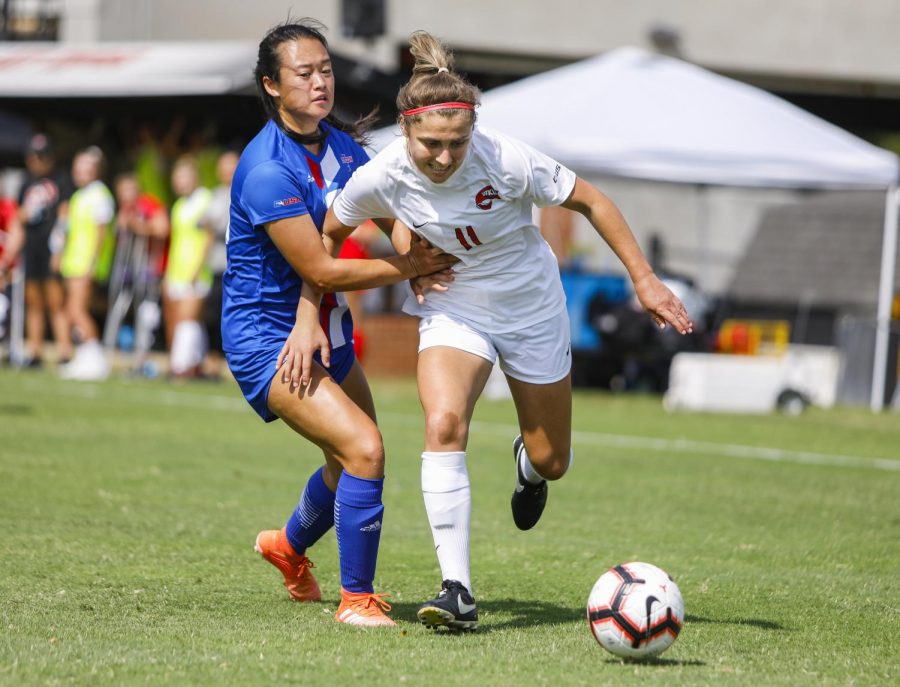 WKU redshirt sophomore midfielder Deven Jackson (11) advances the ball away from Louisiana Tech midfielder Stella Li (18) during a game against the Louisiana Tech Lady Techsters at the WKU Soccer Complex on Sunday Sept. 29, 2019.

The WKU soccer team (6-2-1) handed visiting Louisiana Tech (9-1-1) its first loss of the season on Sunday afternoon when junior forward Ashley Leonard scored a game-winning penalty kick goal to lift the Lady Toppers past the Lady Techsters in the 106th minute of double-overtime.

“Everyone was tired, everyone was fatigued,” Neidell said postgame. “I told them we knew we would find some physical reserve of energy, but I asked them to challenge themselves mentally to try stay mentally focused and mentally sharp. Obviously, when you get a penalty kick in this kind of game, that’s a real, real challenge. Ashley [Leonard] stepped up and put it away for us.”

Leonard’s golden-goal against LA Tech marked her fifth goal of the 2019 season.

“It felt pretty good,” Leonard said about scoring the game-winning goal for WKU. “I think that Ambere [Barnett] driving up the field with the ball was what did it and I just had to be composed and put the ball in the back of the net. It was important because of how hard we have worked for 90-plus minutes.”

The Lady Toppers ended the match with 24 shots on the afternoon. WKU’s 24 shots against LA Tech marked the team’s fourth straight match of 20-plus shots in game.

WKU was led in shots by Leonard and junior forward Victoria Mayo. The forward duo both had five shots in WKU’s win on Sunday.

Freshman midfielder Sydney Ernst gave the Lady Toppers solid minutes in the first half, winning nearly every 50-50 ball and getting WKU in the attack.

“Sydney has been spectacular,” Neidell said of Ernst’s overall development this season. “We recruited her as a defender, so she found a position on our team as a central-midfielder is huge. She has stepped her game up. She is a key component to what we’re defensively. She puts herself in good places to win balls, tackles hard and then she starts our attack by connecting to another player on the team. She has been tremendous.”

Redshirt senior goalkeeper Anne-Marie Ulliac didn’t see much action in the first half, as WKU limited LA Tech to only one shot during the frame. The Lady Techsters’ lone shot of the first half came from junior defender Klesha Darroux at the 17:20 mark.

After Darroux’s shot, the Lady Techsters went 41 minutes without a shot, tallying their next shot at the 58:24 mark of the contest.

Redshirt sophomore forward Deven Jackson made LA Tech goalkeeper Carlotta Cartelli work for her seventh save of the match at the 67:39 mark.

Jackson fired a right-footed shot just outside of the box to the top left of the goal, but Cartelli made a diving save to keep the match scoreless at that point.

Cartelli finished the match with 11 saves.

Jackson hammered another shot just two minutes later and this time, she netted a right-footed finish at the 69:08 mark. Jackson’s goal was her third of the season and it put the Lady Toppers in front 1-0.

Sophomore forward Autumn Woodward slid a shot around Ulliac, scoring her 13th goal of the season for the Lady Techsters and evening the score to 1-1 at the 82:33 mark.

The Lady Techsters’ late goal forced the game into not one, but two overtime periods, where WKU was eventually able to escape with its fourth straight win.

WKU had three shots in the first overtime period, but the Lady Toppers didn’t score until the second overtime period when Leonard netted her game-winning penalty kick.

Following the win, the Lady Toppers will continue Conference USA play on Thursday when they welcome Charlotte (6-3, 1-1 C-USA) to the WKU Soccer Complex.