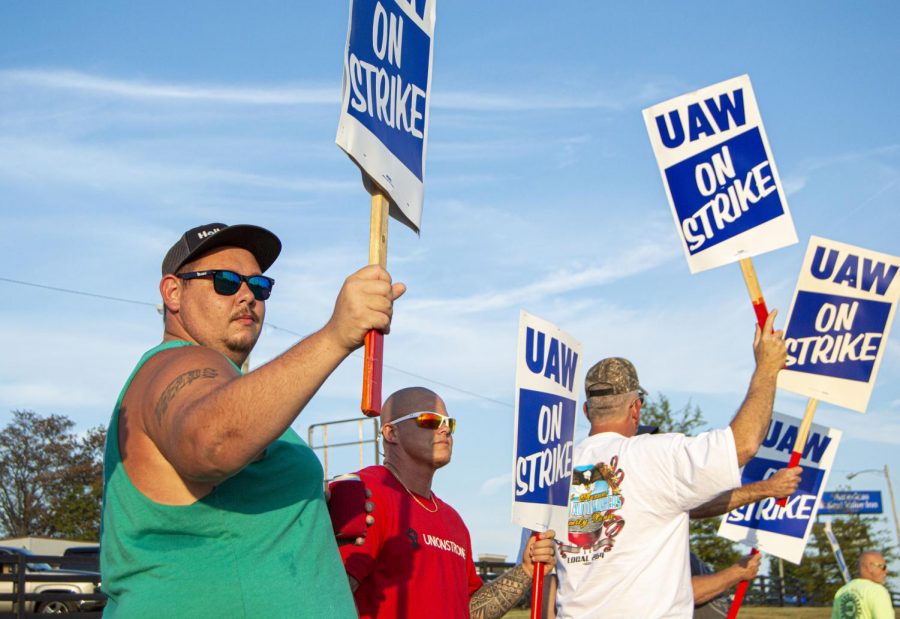 Line workers at General Motors Bowling Green Assembly on strike on Tuesday, Sept. 17, 2019. The workers have been on strike since Sunday, after talks between the United Auto Workers and GM ended with no new contract. Because of this, 49,000 line workers at GM plants across the country began a strike, with 900 workers at the Bowling Green plant joining in.

Since Sunday, 900 line workers at the General Motors Bowling Green Assembly plant have been on strike.

The strike comes after contract negotiations between GM and the United Auto Workers ended earlier this week with no deal. Jason Watson, UAW representative for the Corvette plant, outlined some of the goals of the strike.

“The language that we’re trying to attain covers people that are unfortunately on a tiered wage system,” Watson said. “It takes them eight years, currently, to reach full wages and benefits.”

Watson said that currently, workers in temporary positions will be “strung along” by GM for a number of years until they become full-time employees. After they become fully employed, they wait the additional eight years to receive full benefits.

For some temporary employees at the Corvette plant, Watson said, the wait to become a full-time employee has stretched to three years.

Watson said the strike at the Corvette plant began Sunday night at 10:59 p.m.

“I walked in, I got the [union] members who were on third shift, and I walked them out,” Watson said.

In addition to GM, negotiations have taken place with Ford Motor Co. and Fiat Chrysler Automobiles. Earlier this week, as the contract with GM expired, the UAW approved an extension of the contracts with FCA and Ford.

Even though the contract with Ford was extended, this did not stop several line workers from Ford’s Kentucky Truck Plant in Louisville from visiting the striking workers in Bowling Green in a show of solidarity.

According to a statement from GM on Sept. 16, negotiations with the UAW have resumed.

“Our goal remains to reach an agreement that builds a stronger future for our employees and our business,” the statement said.