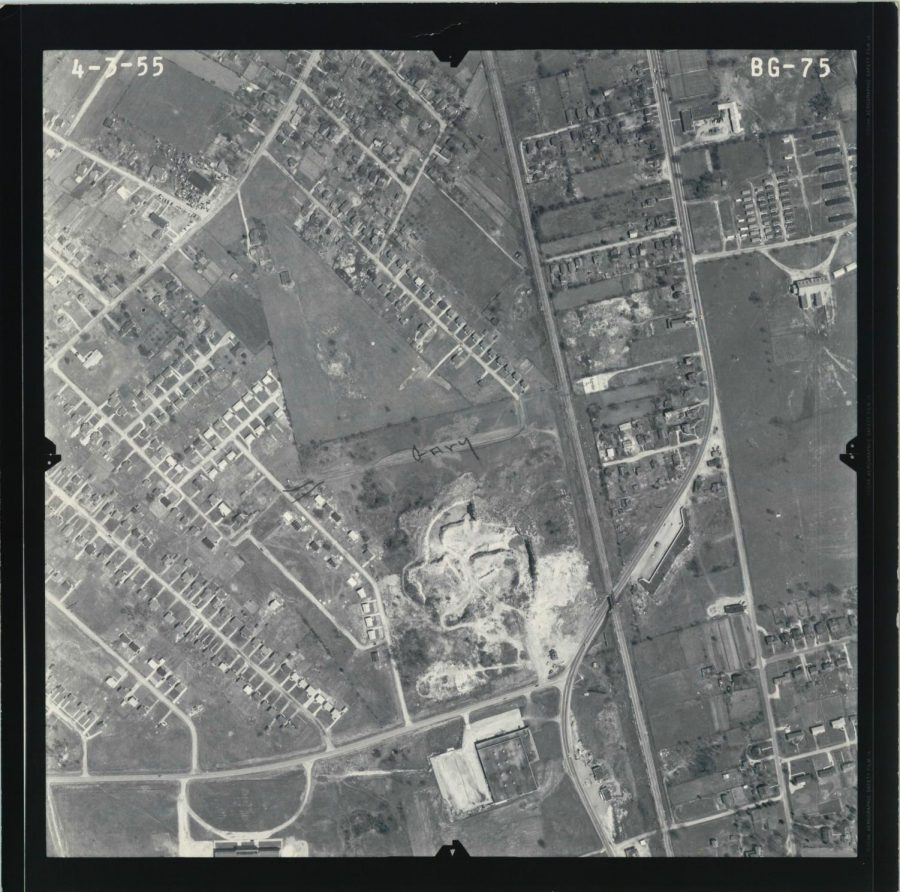 Photo of Jonesville from 1955. Courtesy of Tonya Colley.

Bowling Green’s history with development and gentrification is often forgotten.

According to the Urban Displacement Project, gentrification is neighborhood development that facilitates economic change by means of real estate investment, resulting in new higher-income residents movingin and demographic changes in education level or racial make-up of residents.

Shake Rag was a Black community with its own churches, businesses and stores founded in 1802 by former slaves, soldiers and their families who had fought for the Union during the Civil War.

The land was donated for use as an African American public square, named for the women who would shake their “rags” on laundry day.

Greta Fishback, a WKU alumna and former resident of the Shake Rag area, moved to Bowling Green from Rockville, Kentucky, when she was about four or five years old.

Fishback said she lived on Chestnut Street, and her mother still lives there, between third and fourth streets.

“Everybody knew everybody,” Fishback said. “Everybody was friendly. You could just go and do whatever you wanted.”

Fishback described Shake Rag as a “typical Black neighborhood.” She recalls her earlier childhood memories where her and fellow neighborhood kids would play around.

“There was a park, but my mother was so strict, so we had to sneak to the park,” Fishback said.

“I’m still a flower person now,” Fishback said. “I just always like to play in the dirt, plant stuff and watch it grow.”

Redevelopment in the 1960s displaced many families of Shake Rag. Fishback said they tore down the shotgun houses on Park and High streets and rebuilt them.

“They said they were going to build nice apartments with inside facilities and bring the community back,” Fishback said.

When they did not, families began to leave one by one until there were no more.

“Urban Renewal is what they called it,” Fishback said. “They were gonna fix it all up and make it better. The next thing we knew, they were building a hospital, and I heard that that was the intention all along.”

To her, Shake Rag was something that would always be there, despite the place where she was raised no longer standing.

“It was kind of heartbreaking to know that the community you were born and raised in no longer exists,” Fishback said. “I think growing up, I would have never thought that was going to happen.”

Jonesville, another Black community impacted by the Urban Renewal Project, was founded by free Black men and women from the end of the Civil War to the 1950’s and hosted businesses, churches and a school. In 1968, the state had acquired and sold the land to WKU, which stretched from Dogwood Drive to Russellville Road and was bordered by railroad tracks. The 33 acres of land now hold WKU’s sports facilities.

Angela Townsend was born in Jonesville and recalls multiple family members across the community.

“My grandmother owned property all the way back to the railroad tracks,” Townsend said. “I had relatives on both sides of the Avenue of Champions. I had relatives all over Jonesville.”

The Notable Kentucky African Americans Database states that approximately 70 families were in the community in 1950. The community was also home to many of the first Black students at WKU. Black students were not allowed to live on campus.

When Townsend looks back at Jonesville, she focuses on her father’s role as a business owner.

“My daddy had a store at the edge of our yard in Jonesville. We owned the house across the street and the store,” said Townsend. “My grandparents were on the street near Downing. My grandmother’s [house], where I was born, was on the other side of the street.”

She said the community was very church-oriented and most residents knew each other.

“It was a close-knit neighborhood,” Townsend said. “Everybody looked out for one another.”

According to the Top Scholar Digital Commons, the community was destroyed in the late 1950’s and early 1960’s to create space for an expanding WKU, fueled by urban renewal legislation under Kentucky Project R-31. An older issue of the College Heights Herald reported that the land was purchased for $200,000.

Townsend and her family moved in with one of her grandmothers after the property was bought only for a similar situation to occur on Canton Street.

“I’ve been here twice with that,” Townsend said.

Her grandmother was fortunate enough to own multiple properties, but many others did not have that luxury.

“They didn’t have anywhere to go. They had to move into the projects and things like that,” Townsend said. “Some of them were sick. A lot of them were old. It was just unexpected.”

The main thing Townsend would like for people to know about Jonesville is that it was a home for many Bowling Green residents.

“They tried to say that some of those houses were bad and that’s why they did what they did, but it wasn’t,” Townsend said. “It was home.”

Seventh Street Baptist Church is a local Black church that was founded on June 2, 1982, on Fair Street. The name of the church originally came from the location of the church, Seventh and Kentucky streets. The location is now home to the Bowling Green Ballpark Stadium.

William Carr, a deacon at Seventh Street Baptist Church, grew up in the church as well as in Shake Rag and Jonesville. He recalls the church being much smaller than what it is now.

“I remember there was a time at Vacation Bible School where we had as many as 100 kids a night and the teachers would have us all over the building from the balcony, in the sanctuary, the back and they even used a house that the church owned,” Carr said.

Much like the Black communities, Seventh Street was close-knit and many members did whatever they could to keep the doors open. Carr said that the one thing he could

say about the church’s past is that the members really loved it there.

“They would cook on Saturdays and bring food from their houses to sell plates to support the church,” Carr said. “One Sunday after service, some of the ladies were back there and I heard them talk about getting the money together because the lights might turn off. I saw them dig in the pockets to give more than they already have.”

The church soon after began to investigate new locations due to the impending ballpark stadium.

“The church itself was sitting on the corner of Seventh and Kentucky and that was one of the reasons why we were looking to move elsewhere,” Carr said. “We had heard there was a road coming through here, and the stadium.”

Carr was one of four people on a commission who oversaw finding a new location. With many members being older, they were looking for a place not too far away. They settled on a new three-story building on Fair Street.

Felicia Bland, Member Experience Coordinator for the Girl Scouts of Kentuckiana, helped fight against the process of gentrification by taking the issue to the courts.

The neighborhood that stood across from Bland’s property, along Kenton Street and Greenwood Alley, was a historically Black area, at one time being entirely Black-owned.

“As people began to die out, and some of their homes and other things, it became a rental property,” Bland said.

As properties changed owners over the years, homes rented to various people took a toll on their quality and value. Many properties were soon bought by Chris Robertson of CSR BG Investments.

The Bowling Green Daily News reported that Robertson first planned to build affordable residential units in the area, which Bland said residents were in favor of. Robertson instead sought rezoning to build contractor garages. All the houses were occupied when he purchased them, but he did not re-rent them when tenants moved out.

The City-County Planning Commission approved Robertson’s rezoning plan. It then went through the first reading of the City Commission, where it was initially voted against but passed in the second reading, according to Bland.

Bland and other residents teamed up to pressure the city into reversing the decision. With her family owning their home for fifty years, they found it important to help.

The group worked with the NAACP to file an appeal, which they were granted. Desmond Bell, owner of Bell Vue Properties, and his wife Rozalind Bell bought and began restoring many houses. According to Spectrum News 1, the homes are expected to be fully renovated and ready for renters by spring of 2021, with rent expected between $700 and $900.

“With the help of the NAACP, with the help of an attorney, we were able to save a neighborhood that we feel like would have been extinct,” Bland said.