Student exhibit finds extraordinary in the every day 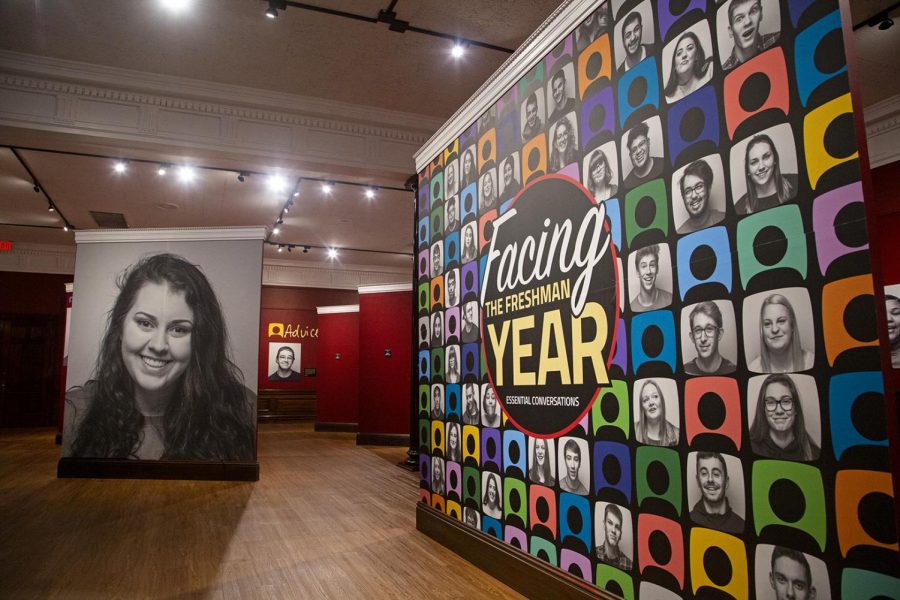 Every student has a story.

The Kentucky Museum’s newest exhibit, “Facing Freshman Year,” features black and white portraits of various students and includes personal quotes regarding advice to faculty, worst-day-of- freshman-year stories and even letters to their past selves. All these aspects are woven together throughout the exhibit, highlighting the story within every student and how it deserves to be heard.

The students featured in the exhibit are members of Freshman Guided Path- way, a student success initiative program intended to provide additional support and guidance for students from Bowling Green schools attending WKU. These students represent a typical WKU student in things such as academic performance and non-athlete status.

Daniel Super, director of the Burch Institute, said he imagines the student body to be like a bell curve: At one end, there are students that need more help academically. At the other, there are honors students and others who excel academically.

Students at either end of the spectrum receive the most attention and aid on campus although they represent the smallest parts of the student population. Freshman Guided Pathway caters to students that are at the middle of the bell curve, Super said.

“Based on their demographics, what they’re targeting is the typical Western student,” Kentucky Museum Education Curator Christy Spurlock said. “That’s what these students represent.”

Many of the students involved are locals who don’t live on campus, work part-time or even full-time jobs and represent the type of students WKU strives to retain, Spurlock said.

Students in the program go through freshman year with additional guidance from on-campus mentors and complete tasks such as designated study hours. If they complete all tasks and maintain a certain GPA by the end of the year, they receive tuition incentives.

The exhibit was created due to responses a portion of these students, now sophomores, gave after looking back on their freshman year.

“Being able to host this show conceived by our colleagues at the Burch Institute shares the intimate personal stories of what it is like coming to college through the eyes of the students experiencing Hilltopper life for the first time,” Kentucky Museum Director Brent Bjorkman said. “This ‘Facing the Freshman Year’ exhibit is an excellent example of an innovative collaboration dedicated to student success.”

The exhibit’s original purpose was to highlight the program, though it has grown into an exhibit that highlights not only the program but also what it means to be a student at WKU, Spurlock said.

For Spurlock, the evolution of the exhibit meant bringing her back to her own time as a WKU student.

Sophomore Canan Russell, one of the students featured in the exhibit, found that seeing the other responses empowered her own college experience.

“The similar responses let me know that I am not the only one going through these college struggles,” Russell said.

Though the exhibit is intended to be relatable, Super said each of these students has been through things most can’t relate to.

From moving across the world without notice to supporting their own siblings at an early age, the exhibit also examines the unimaginable.

Super said he sees each student has a story which deserves to be told, but it’s up to the institution and its faculty and staff to build relationships with students to find those stories.

“Everybody has that story in them, but we don’t illicit it or even become aware of it unless we try to get to know them,” Super said.

Super believes the stories and voices on display in the exhibit are representative of the rest of the WKU student body and should be treated as such. He said he hopes faculty and staff will see these stories and be reminded that every student is anything but typical.

“The students are special,” Super said. “Let’s treat them as such.”