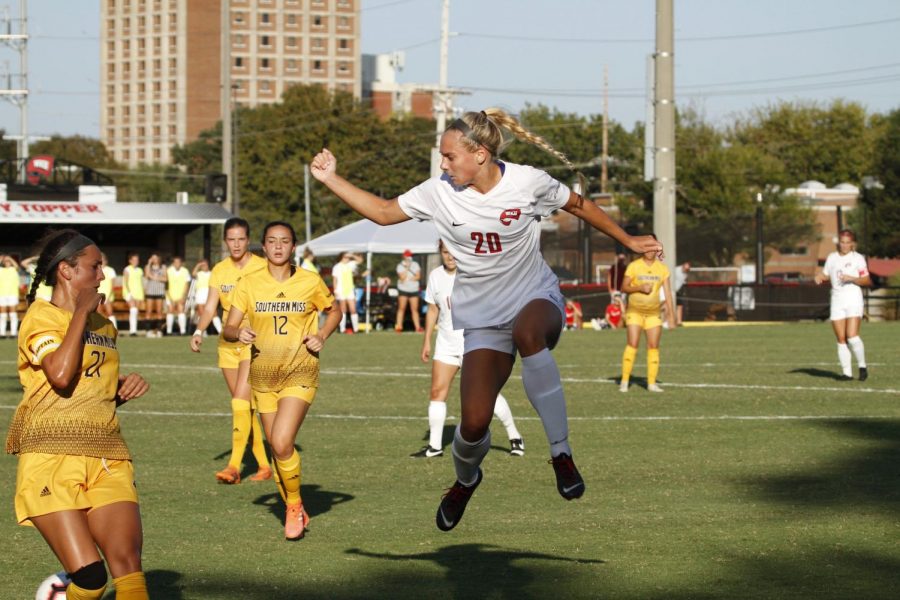 WKU forward Ansley Cate (20) jumps to play the ball during a home game against Southern Miss on Saturday, Sept. 21, 2019. The Lady Toppers won the game in a double-overtime thriller.

The WKU soccer team (5-2-1, 1-0 C-USA) kicked off Conference USA play with an emphatic win over the weekend, as the Lady Toppers netted a golden goal in the 104th minute of double-overtime to escape a tough test against Southern Mississippi (5-4, 0-1 C-USA) with a 1-0 win.

All-C-USA Preseason Team member Ambere Barnett scored the game-winning goal at the 103:31 mark of the double-overtime period, lifting the Lady Toppers past the Golden Eagles for the program’s first win in a C-USA opener since the 2016 season.

The last time WKU won its first matchup in conference play was Sept. 15, 2016 — a 1-0 road win for the Lady Toppers over Marshall in Huntington, West Virginia.

A season ago, the Lady Toppers opened conference play against Southern Miss on Sept 16, 2018. The Golden Eagles defeated WKU 1-0 in overtime in Hattiesburg, Mississippi.

Head coach Jason Neidell made sure his 2019 squad wouldn’t leave Saturday’s match against Southern Miss with the same disappointing result.

“I told the team before the second overtime, ‘We’re not leaving here without three points, let’s go get it,’ and I think Ambere [Barnett] took that to heart,” Neidell said postgame.

Barnett’s golden goal against the Golden Eagles marked her fourth goal of the season. The Rockport, Indiana, native has now scored a goal for the Lady Toppers in each of their last three matches — all of which were wins for WKU.

The Lady Toppers are on their first three-game win streak since October 2017. WKU finished the 2017 season with a 7-9-1 record and didn’t make the C-USA Tournament field.

Redshirt sophomore midfielder Deven Jackson received her first start of the season against the Salukis. Since adding Jackson to the team’s starting lineup, WKU is now 3-0. In that span, the Lady Toppers have tallied 11 goals and allowed just one — against Alabama A&M on Sept. 15.

With the Lady Toppers closing out their non-conference slate on a high note, Barnett said the team was ready to be back on the pitch for their conference opener against Southern Miss.

“We were very excited,” Barnett said about the team kicking off C-USA play. “We’ve been waiting for [conference], but like I said, we’re taking it one game at a time. Now, the day has come. We’ve been preparing all preseason and all season before conference.”

After WKU reached double-overtime again over the weekend, the Lady Toppers have now played four of their first eight matches into the second period of overtime.

The Lady Toppers have seemingly flipped the page on their double-overtime woes, but WKU still struggled to find the back of the net, despite tallying 22 shots against Southern Miss.

Neidell said his team is improving offensively, but still needs to work on finishing in the final third of the field.

Although WKU struggled in the final third of the field against Southern Miss, the Lady Toppers dominated the midfield. WKU connected time-and-time again in the midfield, leading to multiple dangerous balls played into the Golden Eagle box.

All four of those shutouts came during the four-game winning streak the Golden Eagles carried with them into Bowling Green. Southern Miss’ win streak included a 2-0 shutout victory against Power 5 opponent Auburn (4-3-2, 1-0 SEC) on Sept. 13.

WKU also came into its conference opener with four shutouts on the season. Prior to WKU’s match against Southern Miss, the Lady Toppers pitched shutouts against Belmont (1-6-2, 0-1 OVC), Kentucky, Middle Tennessee State (4-5, 1-0 C-USA) and Southern Illinois.

WKU’s defense remained resilient against the Golden Eagles, as the group recorded its fifth shutout of the season.

The Lady Toppers were sound across the back and didn’t allow Southern Miss to get many great looks at the goal, which Neidell praised postgame.

“Our four in the back were fantastic today,” Neidell said. “This was their best game of the season. Their movement in relation to each other was absolutely phenomenal today.”

WKU limited Southern Miss to only seven shots on the afternoon. In the second half, the Golden Eagles went the first 22 minutes of the half without even attempting a shot.

“Our backline is absolutely incredible this year,” Ulliac said in a postgame interview on Sept. 5. “It’s four upperclassmen and they’ve been working so hard. Each one of them has improved so much individually this year, and they’ve also improved as a backline. We have a lot of really good communication with [the defense] going on.”

The Lady Toppers will continue C-USA play this Sunday afternoon when they host LA Tech (8-0-1) at the WKU Soccer Complex.

The Bulldogs last visited Bowling Green on Sept. 27, 2015, when WKU knocked off LA Tech for a tight 1-0 victory. The two programs most recently met in Ruston, Louisiana, on Sept. 23, 2018, when the Bulldogs defeated the Lady Toppers 2-1.

Kickoff for the Lady Toppers’ home match against Louisiana Tech is set for 1 p.m.