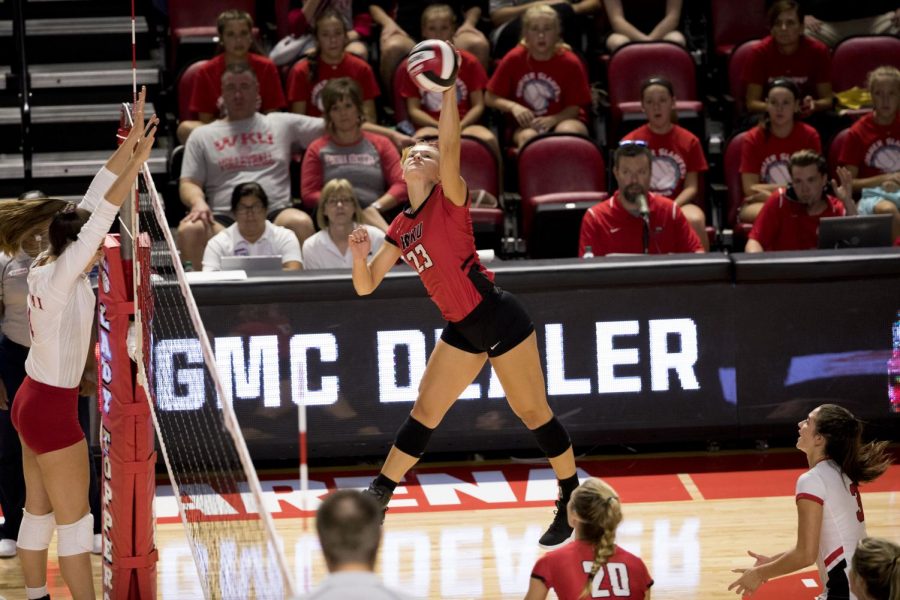 WKU Volleyball senior Sophia Cerino has been named the Defensive Player of the Week for Conference USA, the league announced Monday.

The honor came after Cerino helped the Lady Toppers go 2-1 over the weekend against a Fleur De Lis Tournament field that included Tennessee Tech and two Power 5 teams — Arizona State and No. 24 Louisville.

Eight of the Brentwood, Tennessee, native’s 10 weekend aces came against ASU, holding the Sun Devils to a .167 offensive hitting percentage.

Cerino would end up tossing up 29 serves across her eight trips to the service line in the win. In addition to her impressive serving against ASU, Cerino would add three blocks and 11 kills as well, leading WKU with 21 points in the contest.

With eight aces, Cerino tied for third on WKU’s single-match aces list. She finished one shy of the record, which is shared by Cindy Hudson (1991) and Beaven Hill (2000). Cerino ties Teresa Harrison and Michelle Mingus for third-most after the pair each recorded eight aces at EKU on Sept. 4, 1990.

As a junior, Cerino claimed her first and only previous C-USA weekly recognition with an Offensive Player of the Week nod on Sept. 17, 2018.

The senior is the third different Lady Topper to earn a weekly award from C-USA in two weeks of awards this season. Paige Briggs and Nadia Dieudonne both received C-USA weekly awards on Sept. 2.

The WKU volleyball team is back in action against Eastern Kentucky on Tuesday at 6 p.m. for its home opener at Diddle Arena.